REPUBLIC DAY SPECIAL
WEATHER
Strangely the first two weeks of January had come as a pleasant surprise weather-wise because it was cool in Bali rather than cold. Days were warmer compared to December, with bright sunshine that almost hurt to sit in the open. Stratus clouds were often seen covering the early morning sky and then flit away with the rising sun. This week the school experienced erratic weather. On Monday nimbus clouds dominated the sky, bringing cold weather with piercing chilly winds. Showers on Monday night turned the tables to a very chilly weather. Though the sky was clear, but the chill in the air due to North Easterlies, lowered temperatures further.
Weather figures at school campus: Maximum 23°C
Minimum 9°C
Humidity  20%
Winds: N- NE, Gust 8 km/hr

SKILL
KITES
Kites, kites, kites, beautiful kites
Everywhere in the sky
I can see the beautiful kites fly.
From the terrace, from the ground
Can see everyone flying kites around.
Morning to night
Sky is covered with the kites bright.
Robust shaped kites with long tails
Red, blue, green, yellow fly high in the sky
Without fail.
Oh! I wait for this day when I can fly kites
And eat sesame sweets.

Anumesh Rao/VII/GH
The Glorious Day
The glorious day
The precious day
The day when we become free
From the cruel British rays
The day which brought
The golden days back
The patriots fought
For making India a golden track
But now, there are some who do not value them
And make laughter of them.
Never thought, if they’d not fought
Who was there to bring you here.
Thousands laid down their lives
So our country breathe this day
Never forgot their sacrifice
A very Happy Republic Day.

Our country celebrates Republic Day every year since 1950 with lots of love and enjoyment. This day brings warm greetings for everyone on this occasion. Since 1930 India has been celebrating 26 January as an auspicious day 26 January 1930 was marked as the first independence day of India. After India got its independence on 15th August 1947 the committee under the leadership of Dr. B.R. Ambedkar brought up the new constitution of India which replaced the government of India Act of 1935. On 26 January India became a truly sovereign state. The country finally realized the dream of Mahatma Gandhi & numerous freedom fighters had come true. So 26th January is recognized as Republic Day in the country. Today the Republic Day is celebrated with much enthusiasm all over the country. From today we should take an oath that we should do our best for the welfare and peace of our beloved country. In the prosperity of our country alone, lies our future. We should make India an ideal country in the world. We should dream of making India a richer and happier place to live in. No one can live in shortage. People should not be afraid of anything. All people should be educated. All people should get job of their own choices. India of my dreams should be that all are equal no rich and no one poor. Everybody should live happily. There should be no discrimination. All people should live like a family. In my ideal India no one would live in poverty and also all should live in pollution free life.
JAI HIND - JAI BHAARAT

Jaswant Singh/X/RH
Science
Science is treasure,
Difficult to measure.
Science is a boon,
It is the magic carrying man to moon.
Science is a mystery
Full of chemical history
Solved by ultimate chemistry
Symbol of science
Factor of brilliance
Science is the challenge of excellence.
Science is universal ecology
Narrated by biology
Where plants and animals has
Their separate morphology
Section of treatment and cure for danger
Biology provides a magical chamber.
Physics is the science of
Relation and motion
For which technology moves
With gradual motion
World of creation
World of resource
Together bonded with

STUDY
Monday, 11th January: School reopened after a eighteen long days’ winter break. All students were happy to return to school. Bright cheerful faces could be seen catching up for the holidays and greeting each other. Class XII students were seen tensed and serious because of their Pre-Boards that started on 11th January.
DEAR was carried out.

Friday, 15th January: A special Assembly was held on the occasion of Makar Sakranti. Mr. Dinesh Kumar/Hindi Faculty spoke to share a few facts on both scientific and religious concept of celebrating Makar Sakranti.


Monday, 18th January: Wild life and Environment Exam was conducted in the month of November by the Indian centre for Wildlife and Environmental Studies in South Asia Region. 117 students participated in the Exam. The School is proud of Priyank Rathod/X/DH who brought laurel to the school by winning a Gold Medal who clinched the first position in the country.  Rest all the participants received certificates.

Campus News
Monday, 11th January:  In order to facilitate staff attendance Biometric device has been installed in the school in front of Principal’s Office. The whole staff admin as well as academic register their entry and exit in the school through the machine.

Friday, 15th January: To avoid students’ accidents buses parking and baording takes place inside the school from the back gate. Now buses drop and pick-up students inside school campus.
During vacations buses have undergone some changes. They have fire extinguishers, water cans, first aid boxes and new seat covers.

Friday, 22nd January: As fire protection is a high priority, the school has installed fire extinguishers in each block corridors.

Nowadays Bus drivers and conductors are not seen sitting idly in the campus. They were seen playing football enthusiastically in the Junior Campus. It was really great fun to see them playing football on the ground. 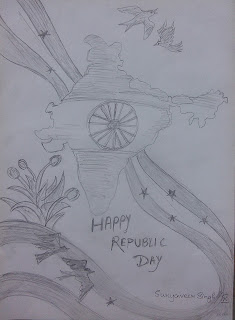