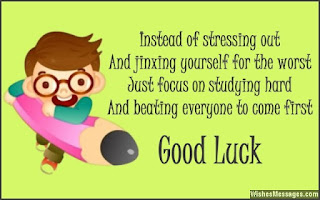 
Importance of Studies and Sports


Studies have a great significance in our lives. My future depends on my studies. In this competitive world your intelligence counts. But along with mental abilities, you must be physically fit too. Sports too have a major role in our lives. Sports also help the body to grow and develop in a well mannered way. By participating in competitions we become confident and also get the qualities of a speaker which are required for any interview. I don’t take interest in co -curricular activities but I love to study and that is my scope.-Nikhil Soni X/TH


IIMUN at The Heritage School, Udaipur
From the participants 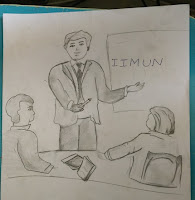 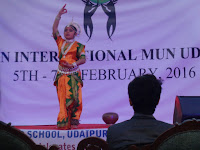 Pooja Dutta XI/GH: It was for the first time we went to attend IIMUN and it was really a great experience for me. I really enjoyed a lot. On 5th Feb. we boarded the bus from Bali to Udaipur at morning 5:30am and reached Udaipur, checked in to a hotel and in the evening we went to HGS and there we had the opening ceremony. Our Chief Guest was the prince of Mewar Maharaj Kumar Sahib Lakshyraj Singh Mewar. We clicked photos with him. On the next day on 6th Feb. we had the sessions.I was in the Lok Sabha session. The session was great. Our chair person was very friendly and frank. He explained each and every thing very clearly and so I understood everything and I felt very comfortable and confident with everyone. I gained a lot of knowledge about my topic " China's claim over Arunachal Pradesh”. I really got interest in my sessions. We had question and answers, moderated and immoderate caucus and solutions for the issue. Almost 150 delegates participated in IIMUN.
From our school there were 6 delegates. All took active participation. In my committee Lok Sabha I was a member of NCP -MP3. On 7th we had our last session and we left HGS and IIMUN but now I miss a lot. I am waiting for the next IIMUN chapter to come because I enjoyed a lot. 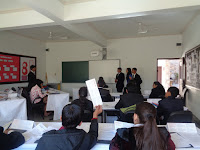 Khushboo Rajpurohit: On 5th of February, 2015,we went to attend the IIMUN session (Udaipur Chapter).It was really a very great and knowledgeable experience over there. On 5th,the day when we arrived there started with the opening ceremony. The opening ceremony started at the time the chief guest Maharaj Kumar Sahib Lakshyraj Singhji Mewar arrived. The intention of the opening ceremony was to welcome and motivate all the delegates who arrived there. On 6th of Feb, the session started. We all went to our respected committee. I was given the DISEC committee and the country allotted to me was Egypt. The first session started with the explanation of the rules and regulations by the chairperson. I did my GSL followed by the moderated caucus and the formal debate on my topic 'Drone Warfare’. It was really a very nice experience. On the next day we the delegates of DISEC committee prepared our working paper including equal participation of mine. There were total five sessions, I attended all of them. The conference ended with a closing ceremony. In this conference I learnt how UN works and what its procedure is. It was a great experience. We returned to Bali on 7th February,2016 with the participating certificate.
Report of Scouts/ Guide Training 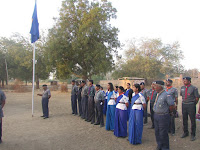 Scouts/ Guide Basic Unit Leader training was held from 16th February to 22nd February. I was chosen to represent my school. The training was hard but it was enjoyable. Teachers from all over Rajasthan had come for this training. There were 38 teachers for Scout training, 22 teachers for Cub training and 22 for Guide training. This organization is an International Organization founded by Lord Baden Powell. The opening ceremony started with the flag hoisting by Mr. Babusingh Rajpurohit, CO of Scout Guide Association, Jodhpur Mandal. Trainers were from Jodhpur, Puladhi, Jaipur and Nadol. We had to get up at 5.00 AM in the morning. After bath we had to go for exercise and games at 6.30AM. Then for half an hour we used to do social service like cleaning the ground, watering the plants etc. After breakfast we had to get our tents ready for inspection. After that we had lessons till 12.30 PM in which the trainers taught us how to make different knots, first aid equipments, pledge, scout flag song, ways to do social service, etc. Then we had lunch. At 2.30 we had everyday test. From 3.30 PM to 6.00 PM again we had lessons. 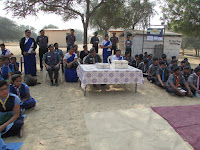 At 6.00 PM we had Court 0f Honour where a decision would be taken for the next day by the Patrol leaders. After dinner we had campfire where each patrol had to give their performance on the theme given to us. At 10.00PM we had to go to bed. The schedules for the days were tight, but it made us fit and healthy. We went for hiking for two days where we were taught how to survive when you are left in the forest. We enjoyed cooking our own food on firewood. We have learnt many new things. Now all those who had training have to start Scout /Guide training in our school. I too will soon start it in our school in the next session. -Bharti Rao/Faculty.


DEAR Program was carried out on Monday and Wednesday.
Class XII and X students have their preparation leave. Board exams start on 1st March. School wishes its students all the best for their exams and hope they all come out with flying colours.
Email ThisBlogThis!Share to TwitterShare to FacebookShare to Pinterest 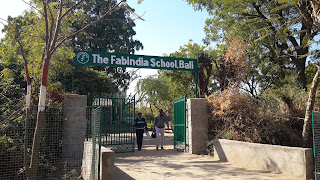 Sky remained partly cloudy for the whole week. Despite snowfall in upper higher reaches of Himalayas and rainfall in Northern Rajasthan, Bali continued to experience warm weather. The weather was partially cold during morning and evening. It did not rain in Bali though most northern parts of Rajasthan experienced heavy showers. The lowest temperature recorded was 13 degree Celsius  and highest 23 degree Celcius. Wind blew at 8km/hr, while humidity remained at 42%. 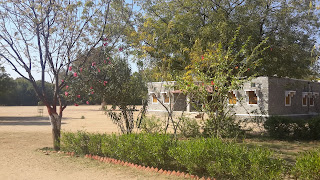 Students cleaned and decorated their classes as a cleanliness drive day for houses. The campus was found spick and span during the week. Students were instructed to keep the campus clean. Certain groups were formed to keep a watch on different areas during recess. Students of Class VIII decorated their class most beautifully. Assembly has a new addition where teachers narrate a story that has a moral at the end and relate it to student’s day to day life. The whole School was given de-worming tablets (Albendazole) sent by the government office as a mark of care and health towards school children.


SKILL
My Dream World
My Dream World looking for a green world,
A nice and pure world looking for a colorful world
A world without pollution
I am looking for such world which is in a true sense, a world
It will be my pleasure to contribute to my earth to make its structure better
How someone can be so selfish that instead of rehearsing good to it, they are harming it.
I am looking for a green, clean and pure EARTH, so for my motherland, I can proudly say, here I took birth
-Radhika Singh/ X/ GH
My Brother
My brother is someone like whom I
Love from my heart, he is in my heart and will always stay there.
My brother is so smart, he is my heart
He is the world to me
But you can call him partner, who has filled my life with lots of happiness
It seems like we had never fought
But we do fight, we do tears, and sometimes share tears
Fighting with each other is just like enjoying dairy milk
Our bond in life is just like sugar in tea
My brother is rocks for both, whether good time and bad time.
-Muskan Rathore/ X/ TH
IMUN at The Heritage School, Udaipur

On 5th February, 2016, the six girls along with their teacher Bharti Rao went to Udaipur to participate in the IIMUN Conference held at The Heritage School, Udaipur. The First day, we had the opening ceremony in which they were welcomed by the Heritage School girls and were introduced to the Director and the Secretary of the IIMUN. The Chief Guest was Maharaja Lakshraj Singh, the Prince of Mewar. The girls of Heritage School had performed a beautiful cultural program.
Junior School celebrated Pink Day and Red Day where they enjoyed flying balloons, drawing pictures and eating Candy Floss.
On 6th February, 2016, they were divided into different comities. There, they had mind racking debate session on the moderate caucus topics and had discussions on immoderate caucus topics.
On 7th February, 2016, they were given a task to make working papers and draft resolutions. At the end of the conference photos were clicked of all committee members with their Chairperson. It was very nice experience for all students of The Fabindia School. All returned to school next day, where given the certificate of participation by Principal and were appreciated.
-Blessy Joseph/ XI S/CVH
Students in IIUMN at Heritage School

On Friday 5th Feb,the six girls from school, with Mrs. Bharti Rao went to The Heritage Girls School, Udaipur to participate in the Indian International Model United Nation (IIMUN ) program. We reached Heritage Girls School at 4:00 P.M for the Opening Ceremony. In the Ceremony, we met the Yuvraj of Mewar, Mr. Aman Baldia, Miss Presca, Miss Shreya, Mrs Tulsi Bhatia and many other prominent people. The ceremony ended at 8:00 P.M. The next day, we all set in our committees and then we had conference on the given topic. I was in ASEAN Committee and my agenda was the South China Sea Issue.
There were 21 delegates from different countries and I represented Myanmar. My Chairperson was Mr. Yash Agarwal. He was very nice person. There were three conferences and we all participated.
In conferences, we were given moderated caucus topics, immoderate caucus topics and General Speakers List (GSL). The next day, we had two conferences in which we made two working paper from which only one was passed and the other was rejected. We had question and answer session on the working paper. Then, we made a resolution, which was passed by the whole committee. After that we had an entertainment session in which delegates sang songs and danced.
At last, we were told to write our views on any of the delegates. We wrote our views on each delegate on their placards. Then the closing ceremony was observed.
For me, it was really a great and wonderful experience. I would like to participate again in the next IIMUN.
-Khusi Rao / XA/GH

Mrs. Bharti Rao has gone to Jodhpur from Monday, 15th February to Saturday 20th February to attend Guides Training as School has registered for Scouts and Guides. 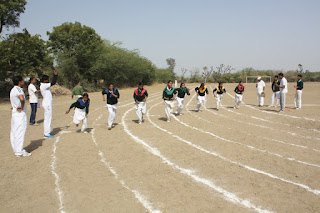 Last weekend, the Sports Day was celebrated in its full vigour. Student participated in various categories and showed their talent. For these categories three positions were declared. And the result was announced on the next day. 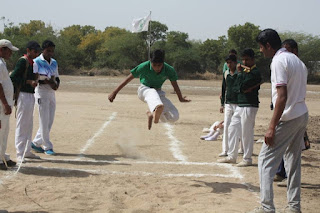 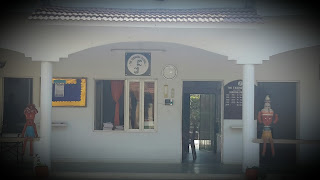