Mera Bali
Sumerpur is a town in the south part of Pali District 25 km from Bali. The town is headquarters of the Sumerpur revenue subdivision, and Sumerpur Tehsil. Sumerpur is an important agricultural mandi for Pali, Sirohi and Jalore districts. Sumerpur is located at the eastern side of the Thar Desert, on the right (north) bank of the Jawai River. The Jawal River is an intermittent that runs during monsoon season, and is tributary to the Luni River. Jawai Dam is situated at about 10 km from the Sumerpur. The Sumerpur Township covers an area of 500 km².

Sumerpur is famous for its Daal Bati and Churma. It is found at most of the occasions whether it be marriage or festival. Sumerpur is one of the biggest markets for mustard seed. Cotton and chilies are exported from Sumerpur. Ghee making is a cottage industry of the town. Other major industries of Sumerpur are iron and wood works. Sumerpur is known in Rajasthan for its ornamental iron works, which produces articles such as iron furniture, gates and railings. Almost all the work is organized in the form of small-scale industries, whereas, automobile retailers sales a lot over the areas near the town.
There are 67 villages in the tehsil under 29 Gram Panchayats. The Gram Panchayats of the tehsil are Arenpura, Bamnera, Bharunda, Palri, Korta, Pomawa, Koliwara, Netara, Bankali, Khiwandi, Novi, Sindroo, Balupura, Dujana, Balana, Sanderao, Gogra, Koselao, Kheemara, Pava, Basant, Dhana, Beerami, Deotara, Lapod, Dhola Jagir, Anoppura, Salodriya and Chanod. Takhatgarh and Sumerpur itself are municipalities in the tehsil. Sumerpur Tehsil has a Panchayat Samiti, as well as being the Sub-district Office with the same name. The Sumerpur legislative assembly constituency is constituted of Sumerpur Tehsil and part of the Pali Tehsil. Present MLA of the Sumerpur is Madan Rathore.
SKILL
Self Respect
Self respect cannot be hunted, It cannot be purchased, it is for sale, it can never be fabricated out of publications. It comes to us when we due alone in quiet moments in quiet places when we suddenly realize that, knowing God, we have done it, knowing the beautiful things we have severed it, knowing the truth we have spoken it, If a person does not have any self respect they cannot make any decisions for themselves. People pushed into situations they either do or don’t want to do. People will also take advantages of them and eventually that person will end up being unheated. In life a person needs to develop sense of self respect for themselves in order to make decisions for themselves and be able to survive in this world. A proper respect for oneself as human beings, most of the time self respect has a positive effect on a person but in some cases it can have a negative effect on an individual. For instance when a person keeps putting himself down and always thinks he cannot do something he eventually that person will think so low of himself he won’t be able to function in life properly because he will be so depressed all the time. -Lakshyaraj Singh/ IX/ GH
भाई - बहन का प्यार है
रक्षा बंधन का त्योंहार हैं
भाई - बहन का प्यार है
अनूठा प्यार का रिश्ता
खुशियों से भरा फरिश्ता है
भाई - बहन का प्यार है ।
प्यार की रानी ने इस रिश्ते की
तारीफ़ की है ,
दुआओ की रानी ने इस रिश्ते को
दुआ दी है ,
ताकत नहीं कलम में मेरी लिख सकू
इस रिश्ते के बारे में
ग्रंथो के ग्रंथ भर जाए लिखते - लिखते
इस रिश्ते के बारे में
भाई - बहन का प्यार है ।
चाँद की चाँदनी का उजाला है
इस रिश्ते में
गम के बादलों का ना कोई ठिकाना हैं
इस रिश्ते में ,
क्या तारीफ़ करू इस रिश्ते की में
अनूठे सुन्दर बंधन का प्यारा सा
नजराना है इस रिश्ते में ,
भाई - बहन का प्यार है ।
-Suryaveer Singh/ X/ DH
I Love my Father
You helped me whenever I got in trouble
You gave me everything necessary for life
You taught me to be disciplined
You gave all the facilities
Whenever Mom beat me you saved me
When I cry
You also cry
You are great
You are the love of my life
You are my dear father
I Love You
Vratik Soni/ VIII/ TH
SPORT
Friday, 26th August: Students practiced for U17 Football tournament. Students will go to Rani to participate in the U17 Football Tournament.
Saturday, 27th August: School’s Girls Football Team escorted by Mr. Tarun Mishra and Ayesha Tak went to Rani to participate in the School Level U17 Football Tournament which was organised by Heritage Girls School, Udaipur. Seven schools participated in the tournament. First match was played against MLPS, Udaipur and school team lost by 2-0. They played second match against Central Public School, Udaipur and won by 4-0. Now they were qualified to play quarter final where they played against Central Public School, Udaipur and won by 2-0. They qualified themselves for Semi-Finals and will play against Heritage Girls School.
STUDY
Friday, 26th August: Assessment of Speaking and Listening (ASL) was conducted for Class IX students. They gave a topic presentation of their own choice, on which questions was asked by the teacher. Then problem-solving task was given in pairs to the students. They discussed with their partner and gave suggestions to resolve it. For Listening Assessment a recording was played. Students listened to it and answered their question paper.
Saturday, 27th August: ASL was conducted for Class X students. Teachers were busy in finishing their syllabus and taking revision for the commencing SA I in September. 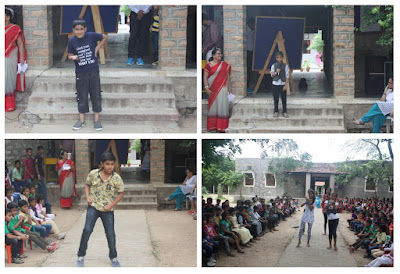 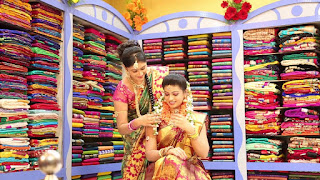 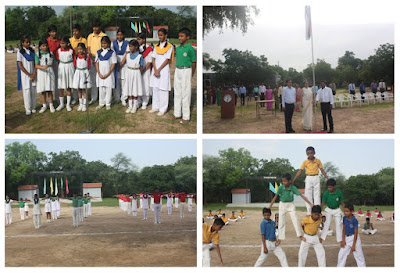 India got freedom over British rule on 15 August 1947, from this day we are celebrating 15 August as our Independence Day. We got freedom with the help of our great freedom fighters that are Gandhiji, Subhash Chandra Bose, Bhagat Singh , etc. This day is celebrated in whole of India such as Schools, Offices, Colleges. On this day the National Flag is hoisted on all Government buildings, schools, colleges, etc. March Past, dancing, singing and some other kind of activities are organized on this day. The main thing is that the famous sweet Laddu is distributed. This is the best day for all Indians. At last I want to thank our great freedom fighters who fight for our freedom.
-Kreena Rao/ VIII/ DH
Rakhi
Rakhi is festival
Which gives you celebration
Rakhi is shine
Which gives you smile
Rakhi is light
Which gives you pride
Rakhi have colour like purple, pink, white
In Rakhi brother promise to sister that he will protect to her
Krisha Dave/ VIII/ GH
My sister
Sister and brother’s relationship of sharing and caring.
Brother is always there to protect their sister.
I can't bear her loud noise,
I can't sleep without her voice
Elder sister is always there to guide me.
My sister is my whole world
Without her I can’t say a word
For my sister is my best
Your smile gives me satisfaction,
And you always come with me as a protection the world’s best sister.
And I love you as you are.
Anumesh Rao/ VIII/ GH
Glorious Days
Where have those days gone?
Where have the glorious days gone?
When India was called the golden bird.
Every where there is corruption,
Everywhere there is terrorism,
We are free today, but not happy today
For there are fighting everywhere.
Our freedom fighters gave their lives and paid a lot for us
But people have forgotten their sacrifice.
Fears and tears have come back,
Where have the glorious days gone?
When India was called the golden bird.
Anumesh Rao/ VIII/ GH 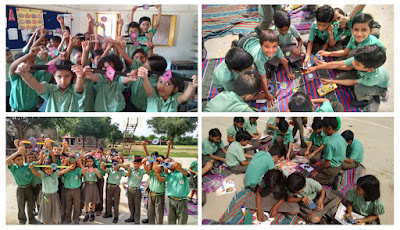 Tuesday, 16th August: A competition was organized for Junior Students on the occasion of Rakshabandhan. The day started with great anxiety and excitement to make the best Rakhi. But students came up with unique ideas on its creativity. Few even used waste material to make their Rakhis! The whole week they were displayed on the corridor display boards.
STUDY
Wednesday, 17th August: On occasion of Sanskrit Diwas Mr. Krishan Gopal Dave gave an Assembly Talk and recited shlokas.
Friday, 19th August: Mrs. Kavita Deora gave an Assembly Talk on World Senior Citizen Day. She made the students aware why this day is celebrated. She also told the students to respect elderly people.
Saturday, 20th August: Mr. Krishna Gopal Dave gave a talk on the World Integration Day. He made us aware why this day is celebrated and told that it is celebrated in the memory of our 9th Prime Minister Rajiv Gandhi because he worked hard for our nation’s unity and integrity.
Ms. Vimmy Rajpurohit and Mr.Rakesh Kumar gave an Assembly Talk on World Photography Day. Ms. Vimmy made us aware why this day is celebrated and told this day is celebrated and told this day was declared by the Government of France on 19th August 1839.
Mr.Rakesh Kumar presented a demo that how camera obscura worked and what is daguerreotype process of photography.
Founder’s Day was celebrated with lots of gaiety and laughter. On the 24th Founder’s Day the school looked colourful as all were dressed in home clothes. A small program was organized. The program started with Students, both from the Junior and Senior Section performed dances and sang songs. The program ended with the game Treasure Hunt. School thanks all its well-wishers for their great support in contributing and spreading the light of education and knowledge
Email ThisBlogThis!Share to TwitterShare to FacebookShare to Pinterest 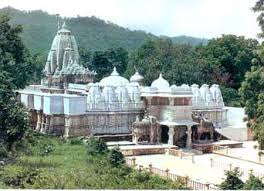 Muchhala Mahavir temple is a Jain temple dedicated to Lord Mahavir, at Ghanerao, in Pali district in Rajasthan state in India. The place is on the route from Falna to Kumbhalgarh. It is 35 km away from Bali. The fair is held here every year on the thirteenth day of the month of Chaitra.
The story goes that once, when the Rana of Mewar was on a hunt, he came to the temple where he was offered refreshment by the priest. The priest offered him the Prasad of the Lord, and the Rana was amused to find a strand of white hair in the Prasad, which must have fallen from the priest’s head. As a joke, the Rana asked the priest “What! Does your Lord have a moustache?” the scared priest, without realizing what he was saying, replied in the affirmative. Carrying the joke further, the Rana refused to pay his respects to the Lord that day, and told the priest that he would return after three days, and wanted to see the moustache of the lord. The priest didn’t know what to do and spent the next two days in prayer. When he did not see any results, he decided to commit suicide rather than be killed by the king. When he picked up the dagger of Bhairon at the temple to kill himself, the Lord appeared before him and advised him to cover the face of the idol with a piece of cloth and ask the king to remove the cloth himself after offering prayers. 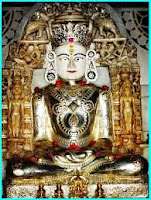 Friday, 12th August: The school reopened after three days of heavy rains. School was flooded with water from all sides. The route to school was over flooded. When water level went down students of Class IX – XII came to School and had regular school.