The dargah of Moinuddin Chishti (Gharib Nawaz -Benefactor of the Poor), known as Ajmer Sharif Dargah or Ajmer Sharif, is an international waqf, an Islamic mortmain managed by the Dargah Khwaja Saheb Act, 1955 of the government of India. Ajmer Sharif Dargah is 2 kilometres (1.2 mi) away from the main central Ajmer Railway station and situated at the foot of the Taragarh hill, and consists of several white marble buildings arranged around two courtyards, including a massive gate donated by the Nizam of Hyderabad and the Akbari Mosque, built by the Mughal emperor Shah Jahan. It contains the domed tomb of the saint. Akbar and his queen used to come here by foot on pilgrimage from Agra every year in observance of a vow when he prayed for a son. The large pillars called "Kose ('Mile') Minar", erected at intervals of two miles (3 km) along the entire way between Agra and Ajmer mark the places where the royal pilgrims halted every day. It has been estimated that around 150,000 pilgrims visit the site every day.
The dargah of Khwaja Moinuddin Chishti is an international endowment, managed under The Dargah Khwaja Saheb Act, 1955 of Government of India. The Dargah Committee, appointed by the Government, takes care of the maintenance of the shrine, and runs charitable institutions like dispensaries, and guest houses for the devotees but do not care take the rituals of the main shrine (Mazar sharif/Astana e Alia) which is under the custody of hereditary priests known as Khadims.
Dewan Syed Zainul Abedin is the direct descendant in the 22nd generation of Khwaja Moinuddin Chishti. Meanwhile, according to the India he is the Hereditary Sajjadanashin Spiritual Head of the shrine of Ajmer Dargah.
ALUMNI 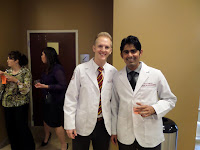 I studied in the school from 1996 to 2003 and passed out Class VII from the School and went to United States for further studies. I have done M.B.B.S from V.Com Medical Institute and Hospital in South Carolina. Currently I lives in Dallas city of Texas, United states. My batch mates of Fabindia school are Ajaypal Singh Ranawat, Brijpal Singh Ranawat, Chinmay Pamecha, Raghuveer Singh, Sheetal Jain and Khushboo Jain. Teachers I miss and who taught me in this school are Shailender Joshi Sir, Shakti Singh Sir, Gajraj Sir, Rakesh Sir [Sports teacher], Jayant Sir, Jyoti ma'am, Meena ma'am and Vishnu Sir. I miss my school and memories of my school's Annual function and Sports Day I remember and miss my School days. -Dhruv Rajpurohit/ Batch 2003.
PARENT THIS WEEK

Mr. Haribhau Koratkar f/o Archana Koratkar/ VII was selected as Parent This Week.
Interview
(ED: Editor and HK: Mr. Haribhau Koratkar )
ED: What is your name?
HK: My name is Haribhau Koratkar
ED: What do you do?
HK: I am a Senior Veterinary Officer at Veterinary Hospital.
ED: How many children do you have?
HK: I have two children.
ED: What was your goal? Did you achieve it?
HK: My goal was to become a Veterinary Doctor and I have achieved it.
ED: What has your child achieved while studying in this school and what
do you want your child to achieve more?
HK: My children learnt English in this school. They have become disciplined and punctual. They have become confident and are able to fight and survive in any condition in the society; mentally or physically.
ED: What feedback would you like to give to the School?
HK: This school has a good education system and activities which encourages the students to participate in various activities which help them to develop their personality .and suggestion is that children should bring only those books which are required on that day. Motivational session should be arranged to build up an aura of positivity.
STAFF

Mr. Krishan Gopal/ HOD Hindi was selected as Teacher This Week. He is basically from Falna . He completed his graduation from S.P.U College ,Falna . He did his B.A in 1997, M.A in History in 2000 and B.Ed.from Kashmir University, Shrinagar .He was an Examiner from the past 5 years.This year CBSE has made him the Central Superintendent in AISSE 2017 at Jojawhar Navodhya School. We all congratulate him for this.

A CBSE Capacity building workshop Social Science class X was conducted from 17 Jan. 2017 to18 Jan2017.The work shop was from 9:00AM to 4:30PM.The resource persons were Mr Rajesh Mishra HOD S.St. Delhi Public School Jodhpur and Ms Lotika Benjmin from H.G. international Abu Road.
First day the workshop started with the welcome speech of Yogendra Arya Principal Rainbow Public School, Pali. Mr. Rajesh Mishra started the workshop by introducing new methods and technology useful for S.St teachers to make their teaching more interesting. Ms Lotika Benjamin distributed chits of topic for micro teaching. After a session of micro teaching all the teachers gave suggestions to make teaching more effective.
Second day Rajesh Mishra explained about the good questions and bad questions. Then he gave assessment to teachers to write good and bad questions along with the reason. He explained the differences between assessment and evaluation .He suggested teachers to make self assessment for them.
Last topic was Lesson Plan. Teachers made their lesson plan and taught according to the topics.
It was a wonderful experience I gained a lot of knowledge useful in developing my teaching skills.
Friday, 20th January: Staff attended their PDP Session. They sat in their respective groups and wrote their chapter of the novel which is in process.
Saturday, 21st January: Mr. Ajay Vijaywargi/ HOD Math and Mr. Suresh Negi/ Math Department attended a two day CBSE Math workshop at Raj Mata School, Jodhpur.
The Staff attended an In-house Workshop conducted by Mrs. Deepika Tandon/ Principal. The workshop started with a game. The main intention to teach through this game was team-building. A video on ‘The Flipped Classroom’ was shown and its importance was explained. Questions were asked and raised on the topic of what difficulties can be faced if we switch on to flipped classroom in the School. More sessions on the topic will be continued on Monday.
SKILL

Saturday, 21st January: Lalkar Singh/ X was selected as the student this week. He was the Master Coordinator and helped Mr. Byju Joseph in organizing Science Week. He came early to School and helped Sir out in each and every aspect.
Thursday, 19th January: Green Day was organized for the students of Pre-Primary Section. Both Teachers and Students were dressed in green. A number of activities were conducted for the students. They recited poems based on the colour green and played a number of games. They brought green colour fruit, vegetable to eat.

SPORT
Monday, 16th January: Practices for Republic Day Parade and PT Display had started. A contingent was sent to High School for practices as the contingent will participate in RD. Parade at High School.
STUDY

I enjoyed a lot in the Science Week. Mr. Byju Joseph showed us many different experiments. Everyone had lot of fun during this whole week. Manvendra and I performed a chemical experiment of HCL with zinc granules in which hydrogen is produced. Lalkar was selected as the best student of our science week. He not only helped in organizing the week but also performed an experiment everyday -Suryaveer Singh/ X/ DH
Email ThisBlogThis!Share to TwitterShare to FacebookShare to Pinterest
Newer Post Older Post Home