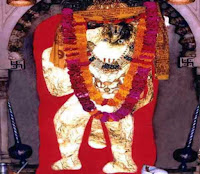 Mehandipur Balaji Mandir is a noted Hindu temple, mandir in Dausa district of Rajasthan, dedicated to the Hindu God Hanuman. The name Balaji is applied to Shri Hanuman in several parts of India because the childhood (Bala in Hindi or Sanskrit) form of the Lord is especially celebrated there. The temple is dedicated to Balaji (another name for Shree Hanuman Ji). Unlike similar religious sites it is located in a town rather than the countryside. Its reputation for ritualistic healing and exorcism of evil spirits attracts many pilgrims from Rajasthan and elsewhere. The old village Mehandipur is located nearby the small hill. The temple of Balaji built in mehandipur is very famous especially in northern part of India. Saturday and Tuesday are the busiest day in temple because these both are the days of hanumanji. Some other temples near by are anjani mata temple, kali mata at teen pahad, panchmukhi hanumanji, ganeshji temple at saat pahad, samadhi wale baba are some important temples in the mehandipur balaji.
The temple has been known for many years, for exorcism from evil spirits attachments and black magic or spells. In 2013, an international team of scientist, scholars and psychiatrists from Germany, Netherlands, AIIMS, New Delhi, and University of Delhi started a study to evaluate all aspects of treatment and rituals at the temple.
ALUMNI
Darshan Vaishnav (Batch 2008-2009) secured around 92% in Class X. He took up Science Math and finished his Class XII from KLPS. Then he went to Jaipur for IIT Coaching. After his coaching he appeared for Engineering Examinations. He got through it and did his Software engineering from Pune. Nowadays he is doing his Software Developers Intern from Build Traders, Bengaluru. He was always good in Academics and secured first position in Class. May God bless him and may he be successful in life.
STAFF
Interview
(Ed.: Editor, VKR: Vineet Kumar)
Ed: What is your qualification?
VKR: My qualifications are BPEd MPEd from Gwalior (MP).
Ed: How do you feel being here?
VKR:Vit: I am very happy to be a  part of this reputed school.
Ed: What type of environment do you get in the school?
VKR: The environment of the school is very peaceful and a nice place for education which helps the students as well as teachers to be a part of this kind of environment.
Ed: Where were you before joining the school?
VKR: I taught for one year at Sagar Public School, Bhopal as a Physical Education Teacher and Judo Coach.
Ed: Why did you think of joining the school and resigning from Sportify?
VKR: From one year I felt that I was not able to give my best as a Sportify teacher due to some terms and conditions. So I joined this school as a regular teacher to teach actually what I wanted to do.
Ed: What message would you like to give to the students?
VKR: My message for students is to work hard, and achieve their goals.
Staff wishes a ‘Happy Birthday’ to Partha Guin. May God bless him!
School welcomes Mr. Vineet Kumar Singh as our new Physical Education teacher. School wishes him a rewarding time with us! School welcomes Mr. Gajendra Singh as our Staff IT Incharge. School wishes him all the best.
SKILL 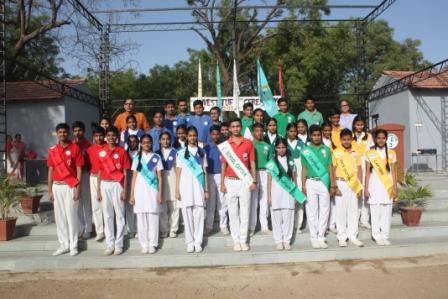 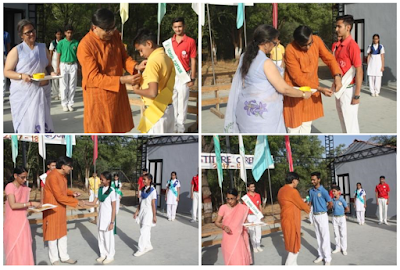 Heartiest Congratulations to the Student Council and Office Bearers for the session 2017-18
After the Investiture Ceremony students went about their regular routine of an activity Saturday.
STUDY
Monday, 3rd April: Result of the Academic Year 2016-17 was announced that day. PTM (Parent Teacher Meeting) was organized for Nursery to IX & XI. About 99% Parents attended the meeting. Majority of them were satisfied with their ward’s performance.
Wednesday, 5th April: After two weeks the School was abuzz again with students life. All students went to their new classes and the Book Store was crowded with parents to buy new books and uniform.
Email ThisBlogThis!Share to TwitterShare to FacebookShare to Pinterest
Newer Post Older Post Home