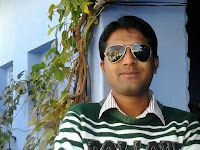 Respect is for those who deserve it not for those who demand it. It means respect is earned we can’t buy or demand respect. Everybody in this world wants to get respect. If we want respect then it is important to give respect as well. We have to respect others and especially our elders including parents and teachers. It is very important that we respect each other to bring harmony in society and always remember that respect cannot be demanded, but earned. My father used to say that in earlier days young people gave a lot of respect to their elders. But in present time it is vanished because all youngsters have lost the sense of responsibility. They just forget their own parents and grandparents when they become adults. Hence in old age of their parents they can’t be a support for them. In this way they don’t show respect. There will be no image of their parent and respect of their own child. It also creates bad image in society. It is so because new generation has forgotten their responsibility. “So, respect elders and then respect will come back to you.”-Usman Gani/ Educator 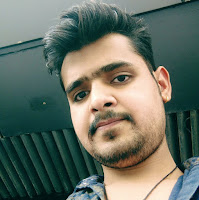 ALUMNI
Ranveer Singh Rajpurohit ( Batch 2011) is now an advisor at the Concentrix IBM Daksh Private Ltd. He passed his XII Commerce in 2011. Then he finished his B.Com from SPU. College, Falna. He was a sincere and loyal student. He participated in both Sports and Co-curricular activities and was good in Academics. He was confident and a great support to everyone. He misses his classmates a lot and remembers his old days in school.
STAFF
Monday, 15th January: Staff had PDP Session Mr. Krishen Gopal read out a thought "छोटी छोटी बातों की तरफ धयान देना आवश्यक है" from the book "आइसक्रीम  मेकर" से सुबीर  चौधरी I Educators then discussed their opinions, gave their views and uploaded a writ up with graphics and photo in Ice Cream Maker.
Staff wished Ms. Swati Sood a Happy Birthday. May God bless her and best wishes for her future.
Staff cogratulated and wished Chairman, Mr. Sandeep Dutt and Mrs. Bharti Rao/ Educator on their Wedding Anniversary.
Ms. Kusum Dangi was selected as the Teacher this for her sincerity towards work.

ED: Which classes did you teach at first?
KD: LKG.

ED:  What is your qualification?
KD: My qualification is M.A BEd.
ED: What do you expect from your students?
IC: I would like my students to be good human beings.

ED: Have you taught any school before Fabindia?
KD: No

ED: What message would you like to give to the students?
KD: I would like to give the message to the students that be a good human being and also work hard.
ED: How do you like teaching in this school? How is it different from others?
KD: I love teaching in the school.Good environment is there in the school
PARENT THIS WEEK
Mr. Shravan Singh F/o Bhupendra Singh/ I was selected as Parent This Week. He addressed the Assembly. He said that it was for the first time that he was speaking on the mike. He was feeling proud that he was sending his children in this school. He wanted them to speak confidently in front of the Assembly in English. He has seen a lot of improvement in his child that his child had started speaking some English words at home. He wished that someday he would speak on mike in front of all and that would be his happiest day..
Interview
(ED: Editor, SS: Shravan Singh)
ED: What do you do?

SS:  I am a labourer

ED: How many of your wards are studying here?

SS: My two wards are studying here. Bhupendra Singh/ II and Mayank Singh/ LKG are studying here.
ED: Have you achieved your goal?
SS: No, I have not achieved my goal I expect it from my children.
ED: What do you expect from your child?
SS:  I expect from my children to complete my goal and my dream.
ED: What do you expect from the school?
SS: It is very nice school. I want from the school that my children should speak in English with me.
ED: What message would you like to give to the students?
SS:: I would like to give the message that they should help my children to study because they are weak in that.
ED: How did you like  visiting the school back?
SS: It will be a great honour for me to return back to this school if the school gives me the opportunity.

SKILL
Archana Koratkar was selected as Student this Week for her punctuality in completing her reading project.
NEWS & EVENT
Monday, 22nd January: As our school has been selected in the "Change Maker School"! So we had two members Aditi Sharma and Srikanath from GSP for audit. They made a video of our school and also took interview of Principal Ma'am and Mrs. Prerna Rathod GSP coordinator of our school. The main aim was to focus on the changes brought during the past year like:
1. Roof top rainwater harvesting.
2. Waste segregation at the source i.e. the classroom using two dustbins- one for wet waste and one for dry waste.
3. Saving of 70% of electricity bill because we are using 90% of solar energy which comes from solar panels and use only 10% electricity from board.
4. Organic farming and compost pit has been started this year.
For all the above factors the school has been selected.
Thursday, 25th January: Field events of Junior and Senior Section were held. They participated in zigzag race, hop race, shuttle run, 200 M, etc.

Friday, 26th January:On 26th January, In our country constitution was declared and so it is celebrated as Republic Day. In every school there is special assembly and some speeches. At Red Fort there is a special programme like parade of soldiers, special appearance of every state and at last the speech of Prime Minister. On Republic day every person feels proud for being an a Indian and celebrates this day with joy.

After 15 days of practice the School celebrated 69th Republic Day with gusto and enthusiasm on 26th January 2018. The Principal Mrs. Rajeshree Shihag graced the occasion as the Chief Guest and hoisted the flag and took the parade salute. Mr. Byju Joseph, Vice Principal inspected the parade. The House contingents were inspected by the Vice Principal. After the P.T. Display by the Junior School, Principal gave a motivational speech. Bhagyeshri Mewara/ XI/ TH and Himantika Chouhan/XI/ GH presented a speech.

Mr. Shravan Singh  / Parent also addressed the School. He said that he was overwhelmed by the whole occasion and felt honoured that his child's growth took place here. The whole program was anchored by Bhagyeshri Mewara/ XI/ TH.  Mr. Byju Joseph gave Vote of Thanks. Once the whole function got over sweets  were distributed among the students.

The School's Contingent participated in the RD Parade organised at High School Bali. Even a group of Class VIII B and VI participated in the Dance Competition at Block Level. All the schools of Bali participated in both parade and dance. We are happy to announce that we bagged the First Position in both. Congratulations to all the Fabindians. Thank you Mr. Tarun Mishra and Mr. Monu Khan for your hard work the efforts that you put in. 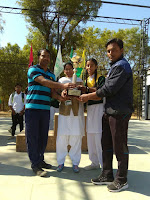 Saturday, 27th January: Students were seen preparing for the Sports Day for a week. Sports Teacher Mr. Tarun Mishra was working hard to make the Sports Day a grand celebration. Students, Support Staff and Sports teacher were seen preparing the ground and tracks for the grand celebration on 25th and 27th January. School celebrated its 9th Annual Sports Meet on that day. In a solemn opening ceremony Principal, Mrs. Rajeshree Shihag declared the Meet Open; the whole school March Pasted; the Sports Instructor Mr. Tarun Mishra lighted the Sports Torch that was in Sports Captain Lalkar Singh/ XI S hands. In turn Lalkar Singh ran with it on the track while each House Captain took the torch and completed the auspicious round to start the Sports Day. The Head Boy Manmanvendra Singh administered the solemn oath to the House with the four houses taking the oath with him. Students presented Yoga Display and Aerobics. Various field and track events put the students in high spirit, each house members cheered for their house representatives. 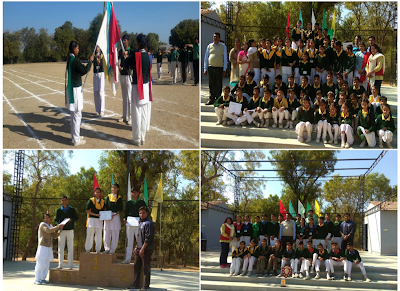 Track events like 50 M, 100 M, 200 M, 50 M* 4, 100* and I00* 4 Relay races of both Junior and Senior Boys and Girls took place. Thanks to all those parents who came to witness the events.
Along with  Principal Mrs. Rajeshree Shihag, School has started with a new culture of honouring parents and Educators to give away prizes for certain events. Thanks to all for giving away the medals and certificates to our winners. Sports Meet ended with the declaration of the Principal to close Annual Sports Meet. It was a great day for all.