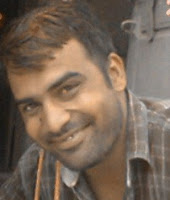 Education can be defined as the process through which a society passes on the knowledge, values and skills from one generation to another. Learning can be defined as the acquiring of new skills, knowledge, and values. Both learning and education have a great influence on the mind and character of an individual. However, learning is the basic instinct possessed by all individuals, and, on the other hand, education is acquired by individuals. On the contrary, learning is the process of adopting knowledge, values and skills. Learning is said to be an on going process. An individual is always learning, from his birth till his death. Education is something that one gets at some point in their life. If learning is an informal process then education is a formal process. Education is something that one gets from a school or university; education is related to classroom learning, and some other set standards. On the contrary, learning evolves at the personal level, for which there are no set standards. A tutor imparts education, whereas an individual learns from his surroundings. Learning is knowledge gained through experience, and education is knowledge gained through teaching. Education can be said to be well organized, whereas learning is something that is related to an individual’s perception. - Gajendra Mewara/ Educator
ALUMNI
Interview
(ED: Editor & RC: Rishiraj Singh Champawat)
ED: What is your name? 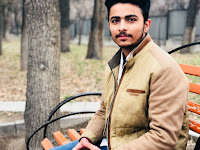 RC: My name is Rishiraj Singh Champawat.
ED: Which was your batch year?
RC: My batch year was 2014-2015
ED: Who were your batch mates?
RC:  My batch mates were Shinu Philip, Krishnapal Singh, Bhavesh Soni, Lokhraj Sandhu etc.
ED: Have you ever participated in any activities, tournaments?
RC: Yes, I was an active cricket player and also a football player
ED: What are your present qualifications?
RC: I am studying MBBS. at International School Of Medicine ISM, Bishkek Kyrgyz Republic
ED: What was your experience at Fabindia School?
RC:  School helped me form my foundation, I still remember those days when I used to bunk classes with my friends and play on the ground whole day and my teachers chasing me to the class .
ED: Will you like to give any message to your juniors, school, or friends etc.?
RC:  Yes, I would urge juniors to focus on their studies as well as other activities..

STAFF
Wednesday, 7th February: Mrs. Rajeshree Shihag, Principal took a session on the book "Whatever it takes". Points discussed by the Educators by were as follows:
Thought process of video clipping- improve certain areas of concern.
Department wise videos to be shown as way of teaching is different in different subjects.
Disadvantages and advantages of videos. Planned classes, students will not be pointed out, syllabus will be completed on time. 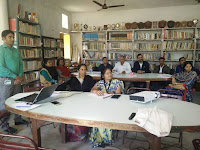 Thursday, 8th February: Strategy of video recording was discussed in the PLP. Arrangements will be done in the classes that everyone comes in the video and we have a clear video. Functioning of mobile is proper or not before recording the session was discussed. Clear video clips to be taken. Necessary things to come in video. Voice modulation. Evidence to share with each other.
Educators were shown videos: 1. An Ideal Education. 2. Do Schools Kill Creativity.
AVI & ICN volunteer to work with other Schools to deliver better and have PLP sessions in other Schools. 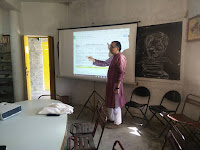 Friday, 9th February: The Annual Budget was shared, discussed and approved under the guidance of Chairman, Mr. Sandeep Dutt, Principal Ms. Rajshree Shihag , Admin Head, Mr. Sandeep Singh with the Board Members and SMC Members.
Staff wished Mr. Byju Joseph a Happy Birthday. May God bless him and best wishes for his future.
GRANDPARENT THIS WEEK
Mr. Bansilal Parihar GP/O of Yug Bhati/ VIII gave a motivational message in the school assembly to be focused in life and understand the role of being punctual with every aspect of life. He shared with children to be extraordinary, by doing simple things in an extra ordinary way. To set example he related a story of J. C. Bose, who was an energetic and overactive person. One day his father called him and told him to bring a magnifying glass and piece of paper and asked him to concentrate on the paper but J.C. Bose did not concentrate on the  paper and did not understand  what was happening. Then he asked his father what he was trying to explain. His father took the magnifying glass and paper and concentrated on the paper. After some time he sees a hole in the paper because of the sunlight. His father told him that he wanted him to concentrate on one thing and save time and not waste time to do other things then  only we can get success be punctual and concentrate on things.
Interview
[ED:Editor, BPR: Bansilal Parihar]
ED: What do you do? 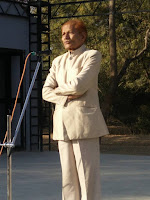 BPR: I work in Mutual Funds as an adviser and I  have joined in people in many schemes.
ED: How many of your wards  are studying here?
BPR: My grandson Yug Bharti/VIII B and Shivangi Bhati from previous batch.
ED: Have you achieved your goal?
BPR: No, I have not achieved my goal. The goal is like mirage, it cannot be reachable.
ED: What do you expect from your children?
BPR: They should excel and to be top achievers
ED: What do you expect from the school?
BPR: Best results in every field like academics, sports etc.
ED: Would you like to visit the school again ?
BPR: Yes, whenever you call I will reach and be here 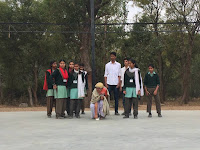 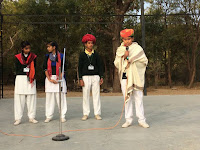 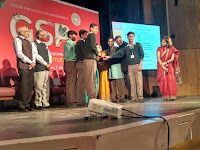 Wednesday, 7th February: The strong vision of The Fabindia School which was seen 25 years ago of being a Green School is at last fulfilled. The School has been awarded the School Change Maker Award from 1200 schools of the entire country. It is among the first four Best Change Maker Schools.
The other recipients were Delhi Public School Patna (Bihar), Kendriya Vidyalaya Army Cantt Pangode (Kerala), Kendriya Vidyalaya Ottapalam (Kerala) and Motilal Nehru School of Sports (Haryana). 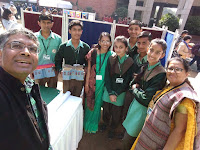 This year, 2,863 schools from 29 states and five Union territories registered for the GSP environmental audit. Of these, 1,193 schools submitted their completed audit reports to CSE. The auditing was done on various parameters including resource efficiency, low water use, energy efficiency, low waste generation, harvesting and recycling of water, and providing a healthier space for its occupants as compared to a conventional building.