Bijapur is a small village about 20kilometers away from Bali. It is known for its pond which has water the whole year round. Water is used for animals that come there to drink water. During the Summer Season, water from Mithari Dam is supplied in it through canals. There are many Hindu temples like Har Har Gange, Hanumanji Temple, Sithla Mataji temple which is worth seeing. Har Har Gange is the best trekking place around.

Another place of interest is a Jain temple which is three kilometers from the village. It is Rata Mahaveerji or Hathundi Teerth which was built in year 313 (370 V.S.) and was earlier dedicated to Parshvanatha but after the installation idol of Shri Mahaveer Bhagwan in year 1278 (1335 V.S.) this temple has Bhagwan Mahaveer Swami as its primary deity. This idol is made of bricks, sand and calcium, having bloodish(Rata) red colour and hence also called as Rata Mahaveerji. This 135-cm tall idol of Mahaveer Swami is in padmasan position The 4th century idol is still present in this temple.
Mr. Pusphendra Singh Ranawat who is the State Energy Minister is the native of this place. He was elected three times MLA from the Bali Constituency from 2002.His Rawla is situated in the heart of the village. The villagers celebrate each and every festival with a lot of gaiety.
SKILL 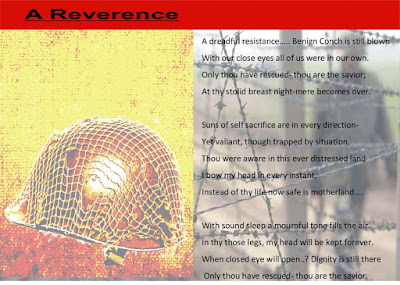 Written by Parth Guin, Designed by Rakesh Kumar/ Art Faculty
Reverence to martyrs’
Where has the beauty of the country gone?
Everywhere there is terrorism
India has security
But everyone is found guilty,
Is there any difference today?
Or when we were under the cruel British rays
The patriots fought
To make India a golden track.
Till today soldiers give their lives
To make Kashmir a heaven
We say we are free’
But are we really free.
But now, there are some who do not value the martyrs
And make laughter of them.
Never think, if they’d not fight
Would we breathe in free air?
Eighteen laid down their lives
So our country could breathe this day
Never forgot their sacrifice
I salute and pay homage to them
Jai Hind!
Kirti Malviya/ X/ DH
Book
A book is like a television
Inside your head
It tells you stories
It takes you to places
It scares you
It makes you laugh
But you draw the picture
A book is like a television
And no one tells you to turn it off
Aryan Sirvi/ VII/ DH
STUDY
Monday, 19th September: A special assembly was organized to pay homage and reverence to the 18 Martyrs’ who lost their lives in army base in Uri, Kashmir on18th September.  They were attacked by terrorists early morning.  The terrorists used hand grenade, arms and munitions. School observed two minutes silence and prayed to God to rest their souls in peace.
Monday, 19th September- Saturday, 24th September:  Students had their Summative Assessment I. Teachers were busy with correcting copies and sharing feedback with the students.