Mera Bali
Sewari or Sewadi is a village located in the Bali tehsil of Pali district of Rajasthan state, amidst the Aravalli Range. Sewari's historical name was Sewanti Nagari. There were 100 step-wells (Sou Bawari) in Sewari. This is why this village is currently named Sewari. The village has been called Shri Wadi, Shatvatika, Shwet Pati, Seemapati, Shiv wadi-Sewadi. This is one of the largest villages in Bali tehsil. In this village there is a very old temple called Khetla Ji Mandir. There are many temples like Khetlaji, Brahmani Mataji (Dhomou), Mahadevji, Ambe mataji, Maha Laxmiji,Nimbaja Maata, Chamunda Mataji,Hanumanji, and two Jain temples. There are various tribes living in the Aravalli Mountain Range.

Mahavir Temple, one of the earliest Bhumija temples, is situated at Sewari in the Pali district of Rajasthan. This 11th-century temple is an elegant brick-built structure. It is a Pancha Rathas temple with five plasters.
There is also an Ayurvedic Manufacturing Unit named as LUNA PHARMA which has been for the last 10 years which is a GMP certified from the government of Rajasthan, and also has good products for various diseases.
SKILL
Oh! God Thank You!
You gave me mom and dad
For this I am very glad
You are my proud and soul
And I am drinking soup in a bowl
You gave me true friends
Who tie on my hands friendship bands
You are so sweet
And my mobile ringtone is tweet – tweet
You live in heaven
And my favourite number is seven
Oh! God Thank You!
For everything given by you
Krisha Dave/ VIII/ GH


Hockey
Hockey is a light
Which gives you pride
Hockey is a stick
Which gives you treat
Hockey is a game
Which play with brain
Hockey is a sunlight
Which gives you shine
Hockey is a national game
Which play with well
Muskan Rathod/ X/TH.
FOOTBALL
As we know that human beings need to be mentally and socially fit, physically fitness is also important. A sportsman need to be healthy for playing games which need more energy like football .Football is an excellent game to improve the mental, social and physical fitness of a person. It a game of unity and it increases the team spirit, increases our confidence.
Through Football we can learn to play with equality and many more good sportsman qualities starts to develop in us and makes us a good leader. Football is a game of eleven players and some players are in extras in front of the goalkeeper , then defenders just in front of the goalkeeper , then comes the center half which plays as the defender and center half both and in last defender and center which have to strikes the goal  In this game all players give equal participation .So play football and keep myself fit.-Suryaveer Singh Jodha/ X/DH
Games
Games have essential place in our life. If we play games we stay healthy and fit for free from diseases. Hockey is our national game. In this game there are eleven players. Dhayanchand is the best player of this game. I wish to play this game more and more. My favourite game is basketball. There are five players and two teams. The ball is drip between two team leaders at the center of the basketball court for three times. It is the passing game in which we have to pass ball to our team player and we have to do basket in front of second team. Football is also one of my favourite games. In this there are eleven players. Messi is the best player of this game. In this team spirit, physical strength, running must be proper, have your will power in you and be calm. You can be the best player of any game with these things.- Diksha Choudhary/ VIII/ GH
Tuesday, 30th August: Birthday Celebrations were organized for students of Junior Campus whose birthdays fell in the month. They partied, danced and had a cake cutting ceremony. They had great fun which was seen on their innocent faces. 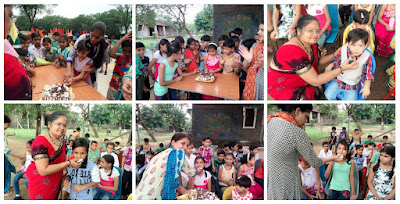 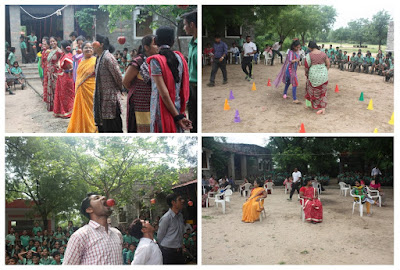 Khushboo Rajpurohit/XII/TH:  Spoke some facts about Dhyanchand that are as follows:
1. The hockey legend Dhyanchand was born on 29th august 1905 in Allahabad.
2. Destiny had already set a bigger role for Dhyanchand because as a young boy Dhyanchand used to love wrestling.
3. Dhyanchand was employed by the British Indian Army as a sepoy at the age of 16.
4. Dhyan Singh got the name Dhyanchand because he used to do practice during the late night hours under the moon, his fellow players gave him this name.
5. Fuhrer of Germany Adolf Hitler was so impressed by Dhyanchand’s stick work that he offered him German citizenship and the rank of Colonel in his army.
6. The fear of Dhyanchand’s marvelous game play forced the officials in Netherland’s to break his hockey stick to check if there was a magnet inside.
7. In 1936.D.C. lost a tooth when he collided with German goal keeper Tito warn holtz.
8. Dhyanchand helped India in earning three Olympic gold medals [1928, 1932, and 1936].
9. Dhyanchand was also known as “The Wizard”. He scored more than 400 goals in his international career.
10. To honor Dhyanchand, the residents of Vienna, Austria had set up a statue with four hands and four sticks, depicting his mastery in the game.
Monday, 29th August: On the occasion of National Sports Day, Mr. Tarun Misra and Mr. Vineet Singh Yadav with the help of Class 11th students organized some recreational activities for staff members and it was compulsory for the staff members to participate in the games. They all participated in games like musical chair, balloon blasting, basketing the bucket and apple eating. They enjoyed a lot and they all showed their sporting spirits .Some students from Junior Classes performed dance and it was a wonderful day. Each one enjoyed the day 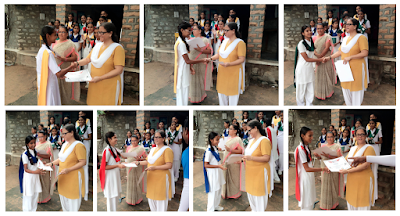 Wednesday, 31st August: School’s Girls Football team participated in U 17 Football Tournament. They reached semi-final , but unfortunately lost and could not reach finals. School secured 3rd position in the tournament out of 7 schools. School Principal awarded certificates to the girls who participated in the tournament. Chanchal Choudhary/X/RH was awarded the best goalkeeper in the tournament. Meenakshi Choudhary/VII/TH was awarded the best player in the tournament.
Thursday, 1st September: School’s Boys Football team escorted by Mr. Tarun Mishra participated in U 17 Football Tournament in Rani. Team won two qualifying matches to reach Quarter Final but unfortunately they lost and could not reach Semi Final.
STUDY
Saturday, 3rd September: From now onwards first three Saturdays will be teaching days and last Saturday will be an activity day. School timing was extended by one hour till 1.00 PM. New Saturday time-table was made and carried out.
ALUMNI NEWS
Saturday, 3rd September: Ms.Niyati Vaishnav (Batch 2008) visited the school. She met her old teachers and commented that she could see many changes in school. She did her graduation course in cosmetics from MS University, Baroda and Professional Beautician course. She is makeup artist for both Gujarati and Hindi movie artists.
Email ThisBlogThis!Share to TwitterShare to FacebookShare to Pinterest
Newer Post Older Post Home