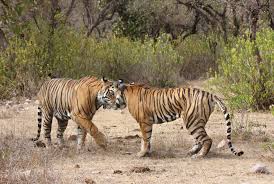 The Sariska Tiger Reserve is an Indian national park and wildlife refuge located in the Alwar district of the state of Rajasthan. The topography of Sariska supports scrub-thorn arid forests, rocky landscapes, dry deciduous forests, rocks, grasses and hilly cliffs. This area was a hunting preserve of the Alwar state and it was declared a wildlife reserve in 1955. In 1978, it was given the status of a tiger reserve making it a part of India's Project Tiger. The present area of the park is 866 km2. The park is situated 106 km from Hindaun, 107 km from Jaipur and 200 km from Delhi. The area of Sariska, being a part of the
Aravalli Range, is rich in mineral resources, such as copper.

The most attractive feature of this reserve has always been its Bengal tigers. It is the first tiger reserve in the world to have successfully relocated tigers.

Khushpal Singh Rathore (Batch 2010-11) is now working at Metro Cash and Carry Organization, Bangalore. He passed The Fabindia School in March 2011 with flying colours. For his further studies he went to Pune where he joined MIT College of Management. He graduated from Flame University in 2015. Nowadays he is in Bangalore. He misses his School a lot and his teachers who had taught him. He remembers his Annual Function and especially the play ‘King and I’ where he acted as the main character of the King.
STAFF

Mrs. Usha Pawar was selected as ‘Teacher this Week’. She was born on 1st July 1965. She completed her B.STC from Ajmer. Previously she was teaching in Aadharsh Vidhya Mandir. And from last nine years she is teaching in the school. Two years she worked as Art and Craft teacher but now she is the coordinator of Pre-Primary. All students love to be with her. And she is very polite and nice to the students. She is a hard worker and puts all her to teach the young Nursery kids and the outcome is shown when you hear these tiny tots speaking in Hindi and responding in what is taught in English.


Saturday, 3rd December: Staff had a four hours training workshop on ‘Blending with Office 365’ organized by Microsoft. The teacher ambassador was Sahil M. Siddique. He showed the applications of the Microsoft and taught the teachers how to use it. Staff registered themselves to Microsoft education and tried to use it.. 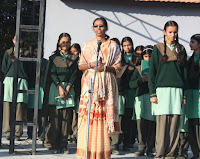 Mrs Kalpana Malviya M/O Kirti Malviya/X was selected as Parent this Week.
Interview
(KM: Kalpana Malviya and Ed: Editors)
Ed: What is your name?
KM: My name is Mrs Kalpana Malviya.
Ed: How many children do you have?
KM: I have two children Kirti Malviya studying in Class X and Mohit Malviya passed the School in the year 2015-16.
Ed: What do you do?
KM: I am a teacher in a Government School.
Ed: What do you want to achieve more in your field?
KM: Whatever I want to achieve I have achieved but yes, after two years I will naturally become the Principal of Middle School.
Ed: What do you want your daughter to achieve more?
KM: I want my daughter to get 10 CGPA in the board exam. And she should learn as she can from her Principal because the Principal is doing very well in upbringing the school.
Ed::What did your ward achieve while studying in the school?
KM: She has become very confident . She is doing well in Art and Craft. She has learnt a lot from the Exchange Program with MGD School, Jaipur and on participating in IIMUN.
Ed: What feedback would you like to give to the School?
KM:I am very happy with the environment. I love the exchange programs and the IIMUN conferences and the other activities in the school. I want that students of the school should be able to speak fluent English.
SKILL
My School
Very, very big is my School,
Pride of Bali,
Calm and cool.
Name of which is Fabindia School
Here we come to read and write
One day to become great and bright know I am safe here
I will do hard work as birds in their nest
For my School and become the best
-Anumesh Rao/VIII/GH
त्यौहार
त्यौहार जो बनाए एक नया संसार ,
त्यौहार जो रोशन कर दे गर -बार ,
त्यौहार जिसमे आती हैं फाटकों की आवाज़ ,
त्यौहार जिसे कहते हैं हम ,
त्योहारों का त्यौहार ,
बताओ कोनसा हैं यह त्यौहार ?
त्यौहार जो पहनता हैं रंगोका ताज ,
त्यौहार जिसमे सब जला डेट हैं आपने दाग।,
त्यौहार हैं यह खुशियों का ,
बताओ कोनसा हैं यह त्यौहार ?
सूर्यवीर सिंह /X/ DH
DAD
Dad is my inspiration.
Which gives me motivation.
Dad is a candle
Which consumes light
My dad trusts me
Because he knows me.
My dad is my supporter
Because he knows I am his daughter
My dad helps me
Because he care’s me
My dad love me
Because he needs me
He improves me
Because he trusts me
I love my dad.
Krisha Dave/ VIII/ GH

Wednesday, 30th November: The birthdays of the students from Nursery to Class V that fell in the month of November was celebrated in the Main School Campus. The birthday students partied by cutting the cake, dancing and distributing chocolates.
SPORT
Saturday, 3rd December: After the Assembly PT Drill was displayed by students of Class I- XII under the supervision on Mr. Tarun Mishra/ Sports Faculty
STUDY
Thursday, 1st December: World AIDS Day was celebrated in the School. In a Special Assembly, Mr. Byju Joseph/AD (Academic Dean) spoke at length on HIV-AIDS, to bring awareness among students. Divya Solanki/XII/ TH told us about AIDS and its immune deficiency process.
MATH WEEK: DAY I