Jaisalmer nicknamed "The Golden city", is a city in the Indian state of Rajasthan, located 575 km west of State Capital Jaipur. The town stands on a ridge of yellowish sandstone, crowned by a fort, which contains the palace and several ornate Jain temples. Many of the houses and temples are finely sculptured. It lies in the heart of the Thar Desert (the Great Indian Desert) and has a population of about 78,000. It is the administrative headquarters of Jaisalmer District. Jaisalmer is named after Maharawal Jaisal Singh, a Rajput king who founded the city in 1156 AD. "Jaisalmer" means "the Hill Fort of Jaisal". Jaisalmer is sometimes called the "Golden City of India" because the yellow sand and the yellow sandstone used in every architecture of the city gives a yellowish-golden tinge to the city and its surrounding area.

It is the largest district of Rajasthan and one of the largest in the country, hugged on the west & south-west by the Pakistani border. The length of the international border attached to Jaisalmer District is 471 km. Water is scarce, and generally brackish; the average depth of the wells is said to be about 250 feet (76 m). There are no perennial streams, and only one small river, the Kakni, which, after flowing a distance of 48 km, spreads over a large surface of flat ground, and forms Lake Orjhil. The climate is dry. Throughout Jaisalmer only rain crops, such as bajra, jawar, motif, til, etc., are grown; spring crops of wheat, barley, etc., are very rare.

Built in 1156 by the Bhati Rajput ruler Jaisal, Jaisalmer Fort, situated on Meru Hill and named as Trikoot Garh has been the scene of many battles. Its massive sandstone walls are a tawny lion colour during the day, turning to a magical honey-gold as the sun sets. The famous Indian film director Satyajit Ray wrote a detective novel and later turned it into a film − Sonar Kella (The Golden Fortress) which was based on this fort. This is a living fort and about a quarter of city's population still live inside the fort. The main attractions inside the fort are: Raj Mahal (Royal palace), Jain temples and the Laxminath temple. Jaisalmer has been enriched by its Jain community, which has adorned the city with beautiful temples, notably the temples dedicated to the 16th Tirthankara, Shantinath, and 23rd Tirthankara, Parshvanath. There are seven Jain temples in total which are situated within the Jaisalmer fort built during 12th and 15th centuries.

ALUMNI
Shaily Jain (Batch 2010-11) passed Class XII Commerce in 2011. She was selected as Exchange student in 2009. She went to Loomis Chafee, USA and stayed there for three months. She returned back with a lot of exposure and learning. She did her graduation from JNVU, Jodhpur. She completed her CA from The Institute of Chartered Accountants of India, Mumbai. She is now working as Articled Assistant at R.C. Jain & Associates Chartered Accountants Mumbai
STAFF
Tuesday, 14th February- Thursday, 16th February:
Staff had a meeting with Principal. They discussed about new admission strategies on how they can get more admissions. Ways to create a lively environment in the buses was also discussed. The Staff wishes Mr. Byju Joseph, Ms. Monica Vaishnav a ‘Happy Birthday’ and May their dreams and wishes come true! Deep condolence from Staff to Mrs. Kavitha Devda on demise of her father-in law. May his soul rest in peace!
INTERVIEW
(ED: EDITOR and KSA: MRS. KUSUM SHARMA)
ED: When did you join the school?
KSA: I joined school on 1st April 2015.
ED: Who was the Principal at that time?
KSA: Mrs. Deepika Tandon.
D: What type of environment was there at that time?
KSA: It was very nice when I came here and I saw this lush green jungle and beautiful eco friendly atmosphere. I loved it
ED: Which classes did you teach at first?
KSA: First I was the Pre- Primary Coordinator Then I started teaching taught Class VI- X.
ED: Are the students in contact with you whom you taught?
KSA: Yes, they come to meet me at my home.
ED: Which schools have you taught before Fabindia?
KSA: I taught in many schools before Fabindia. They are Airforce School, Darjeeling, Airforce School -Ahmedabad, Kendriya Vidhyalay- Ahmedabad, B.R.Birla school - Pali, Modern Se. Sec School - Makrana.
ED: What do you expect from your students?
KSA:  Students should be disciplined and serious about studies to meet challenges in their life
ED: What message would you want to give to your students?
KSA: Progress should be there and they should succeed in their life
ED: What is best thing about the school?
KSA: Cool and pollution free environment.
ED: Have the staff helped you out in settling here?
KSA::All staff members are very helpful. They were ready to help me as I was new in this area. 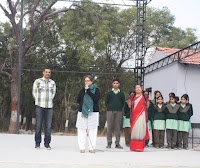 PARENT THIS WEEK
Ramesh Choudhary F/O Dhawan Choudhary/IV/TH and Diksha Choudhary/VIII/GH was selected as the Parent this Week. He sang a motivational song in the Assembly.
INTERVIEW
(Ed: Editor, RC: Ramesh Choudhary)
Ed: What is your name?
RC: My name is Ramesh Choudhary.
Ed: How many of your children study in the school?
RC: There are two children of mine who study in the school.
Ed: What did your ward achieve while studying in the school?
RC: My both the wards are achieving skills, sports, studies and services
Ed: What do you expect from your children?
RC: I expect from my both children to be honest all the time and to be a good Indian.
Ed: What difficulties did you face while achieving your goal – did you achieve it?
RC: I did not face much difficulties and I am still on the way to achieve my goal.
Ed: What do you do?
RC: I am a Laboratory Technologist (PATHOLOGY).
Ed: What message would you like to give to our school?
RC: Everything is perfect. The main things which I like in this school is the friendly atmosphere given to the students and make the kids learn all the subjects in creative and attractive ways. I want the school to improve their sports activities.
SKILL

Saturday, 18th February: Anumesh Rao/ VIII, Diksha Choudhary/ VIII, Kreena Rao/ VIII & Krisha Dave/ VIII were selected as Student this Week for their punctuality towards work as editors of School’s News Weekly.
Wednesday, 15th February: Ten students escorted by Mr. Usman Gani and Ms. Swati Sood went to participate in  Kshitij 2017 Celebrating Innovation, at Pathways World School Aravali,  Gurgoan. Thirteen topmost schools from all over the country participated in Khistij. Students were divided in three groups along with other participants. We are proud to say that six students of the school won trophies and topped the program. Two students Amrit Choudhary/ XI and Jay Rawal/XI bagged of First Position. Khushal Singh/ VIII, Mohd. Sahil/VIII, Prithvipal Singh/VIII & Ichchuuk Soni/ X secured second position. Other students received participation certificates. For Mr. Usman Gani and Ms. Swati Sood the Parthway organized a training program of Microsoft 365 and yammer of one hour. Menakshi Oberai and Sandeep Khamoj helped and guided them and asked about the experience of Microsoft Company and their work. It was a great exposure and experience with learning. Special thanks to Principal Ma’am, Usman Sir and lovely students who made the school proud by securing first position. The school students are talented but they don’t use it. If they use their talent than all can reach Kshitij. Congratulations to everyone on their success.- Swati Sood/ Admin. Dept.
Saturday, 18th February: Students who went to participate in Kshitij shared their experiences and learning in the Assembly. They were awarded trophies and certificates in Assembly.
Students of Class V spoke about social reformers in Assembly
Gracy Chouhan/V/GH: Spoke about religious teacher Gautam Buddha
Meenakshi Sirvi/V/DH: Spoke about social reformer Sir Syed  Adhem Khan.
Riya  Vaishnav/V/DH: Spoke about scientist Aryabhata. 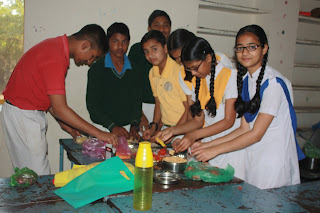 Cooking without Flame Activity was organized for students of Class VI-XI They were excited about it. The students of each class were divided into groups. Each group made different items like Pin-wheel Sandwich, Fruit salad, Lemon juice, Sev puri, Friuit stick, Bhel puri etc. Students used those ingredients which had nutritional value. They enjoyed doing this activity and made tasty food items. Their presentation was also splendid. Their excitement could be seen on their faces. They not only shared their food items with their classmates but they asked their teachers and other class students to taste the items that they had made.
Email ThisBlogThis!Share to TwitterShare to FacebookShare to Pinterest
Newer Post Older Post Home