Chandra Mahal or Chandra Niwas is the most commanding building in the City Palace complex, on its west end. It is a seven-storeyed building and each floor has been given a specific name such as the Sukh-Niwas, Ranga-Mandir, Pitam-Niwas, Chabi-Niwas, Shri-Niwas and Mukut-Mandir or Mukut Mahal. It contains many unique paintings, mirror work on walls and floral decorations. At present, most of this palace is the residence of the descendants of the former rulers of Jaipur. Only the ground floor is allowed for visitors where a museum is located that displays carpets, manuscripts and other items that belonged to the royal family. There is beautiful roof from peacock gate at the entry to the Mahal. It has screened balconies and a pavilion at the where a panoramic view of the city can been seen. It is set amidst well laid out gardens and a decorative lake in the foreground.

"Sukh Nivas" or the "Hall of Rest" - Sukh Niwas is painted in Wedgewood blue fully decorated with white lining. Sukh Niwas has the drawing and dining room of the Maharaja which is fully ornamented with mughal miniatures, silver and glass dining tables. Chandra Mahal 3rd floor is called "Rang Mandir". In this there are small and large mirrors in wall, pillars and ceilings. "Shobha Nivas" – It is on the 4th floor of the Chandra Mahal. It is also known as "Hall of Beauty". The walls of the Shobha Nivas are fully decorated with mirror walls with blue tiles ornamented.
ALUMNI 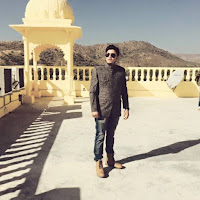 Yogendra Singh Ranawat finished his XII Commerce in 2013. Then he finished his BCom. from JG College of Commerce, Ahmedabad. He was good in Sports especially Cricket and Football. He participated in both Inter School and Inter House Tournaments. He played at State Level too. He was the Head Boy at The Fabindia School in 2012. He was a good athlete too. Nowadays he is studying in Thani Mewad RO, Jaipur. He is the Youth Leader of Bhartiya Janta Party. (Batch 2012-13).