Kuldhara is an abandoned village in the Jaisalmer district of Rajasthan, India. Established around 13th century, it was once a prosperous village inhabited by Paliwal Brahmins. It was abandoned by the early 19th century for unknown reasons, possibly because of dwindling water supply, or as a local legend claims, because of persecution by the Jaisalmer State's minister Salim Singh. Gradually, it acquired reputation as a haunted site, and the Rajasthan State Government decided to develop it as a tourist spot.
The former village site is located about 18 km south-west of the Jaisalmer city. The village was located on 861 m x 261 m rectangular site aligned in the north-south direction. The township was centred on a temple of the mother goddess. The remains of a city wall can be seen on the north and the south sides of the site. The eastern side of the town faces the dry-river bed of the small Kakni river. The western side was protected by the back-walls of man-made structures. The Kuldhara village was originally settled by Brahmins who had migrated from Pali to Jaisalmer region. These migrants originating from Pali were called Paliwals. Tawarikh-i-Jaisalmer, an 1899 history book written by Lakshmi Chand, states that a Paliwal Brahmin named Kadhan was the first person to settle in the Kuldhara village. Some inscriptions also mention the jati (sub-caste) and gotra (clan) of the residents. The various jatis mentioned in the inscriptions include Harjal, Harjalu, Harjaluni, Mudgal, Jisutiya, Loharthi, Lahthi, Lakhar, Saharan, Jag, Kalsar, and Mahajalar. The gotras mentioned include Asamar, Sutdhana, Gargvi and Gago. One inscription also mentions the kula (family lineage) of a Brahmin as Gonali. Apart from the Paliwal Brahmins, the inscriptions also mention two sutradhars (architects) named Dhanmag and Sujo Gopalna. The inscriptions indicate that the Brahmin residents married within the Brahmin community, although the jatis or sub-castes were exogamous.  By the 19th century, the village had been deserted for unknown reasons. Possible causes proposed include lack of water and the atrocities of a Diwan (official) named Salim Singh (or Zalim Singh). 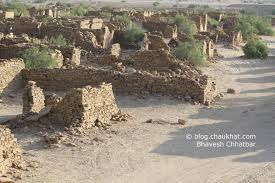 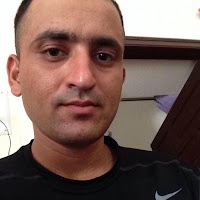 Ajaypal Singh Ranawat (Batch 2006) after passing The Fabindia School studied at B.R.Birla School, Jodhpur. After his XII he did ECE Engineering at JECRC, Jaipur. He was both good in Sports and Academics. His batchmates were Dhruv Rajpurohit, Raghuveer Singh, Brijpal Singh, Yogendra Singh Mertiya, Rahul Sharma and Pushpendra Singh Mertiya. He appeared in CDS Examination and is now Lieutenant in the Indian Army.
STAFF 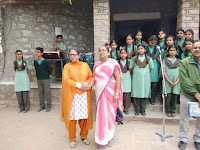 Ms. Bharti Rao/ Coordinator was selected as Teacher This Week as she is a dedicated and willing worker for the progress of the school and the senior most teacher.
INTERVIEW
[ED: Editor, KDA: Kavita Deora]


ED: When did you join the school?
KDA: 13th July 2012.
ED: Who was the Principal at that time?
KDA: Mrs. Parineeta Ranpal.
ED: What type of environment was there?
KDA: I felt mind-free environment for teachers as well as students.
ED: Which classes did you teach at first?
KDA: I taught U.K.G. at first.
ED: Are the students who have left the school in contact with you now also?
KDA: No.
ED: Who are the teachers teaching with you from when you joined to now also?
KDA: Mostly all teachers are there still now.
ED: What is your qualification?
KDA: BAP.
ED: What is your experience in this school?
KDA: 6 years experience I have learnt many things so far in this school like IT knowledge, new techniques of teaching and confident person.
ED: What message would you like to give to the students?
KDA: Think positive before you do anything never think negative of it.
SKILL
Woman
Woman you are so kind,
Society and family you strongly bind,
So elegant so loving and so caring.
You are a daughter, a mother or a sister.
You are the lamp,
Who spreads the light of mercy and modesty,
To heal humanity.
You are so gentle, so full of love,
With pity in your glance.
You are immortal
Who remains in each heart,
And have blessed mankind.
Kreena Rao/ VIII/ DH
Women’s Day
International Women's Day is celebrated on 8th March every year. It commemorates the movement for women's rights. The earliest Women's Day observance was held on February 28, 1909, in New York and organized by the Socialist Party of America. On March 8, 1917, in the capital of the Russian Empire, Petrograd, a demonstration of women textile workers began, covering the whole city. This was the beginning of the Russian Revolution. Seven days later, the Emperor of Russia Nicholas II abdicated and the provisional Government granted women the right to vote.
March 8 was declared a national holiday in Soviet Russia in 1917. The day was predominantly celebrated by the socialist movement and communist countries until it was adopted in 1975 by the United Nations. After this, this day is celebrated as International Women’s Day all over the world. In India free transport service is given to all the women. They can travel in the whole country free of cost. Women is the strength of a family. S he is a symbol of llove, mercy and modesty. She cares for her children and looks after her family without seeking any reward. -Diksha Choudhary/ VIII/ GH
HOLI
Holi is a Hindu spring festival in India also known as the "festival of colours" or the "festival of love" The festival signifies the victory of good over evil, the arrival of spring, end of winter, and for many a festive day to meet others, play and laugh, forget and forgive, and repair broken relationships, and is also celebrated as a thanksgiving for a good harvest It lasts for two days starting on the Full Moon day falling in the  month of Falgun according to the Hindu Calendar, which falls somewhere between the end of February and the middle of March in the Gregorian calendar.
Holi is an ancient Hindu religious festival which has become popular with non-Hindus in many parts of South Asia, as well as people of other communities outside Asia. It is celebrated at the approach of the spring equinox, on Full Moon Day. It is primarily observed in India, Nepal, and their diasporas in other regions of the world. In recent years the festival has spread to parts of Europe and North America as a spring celebration of love, frolic, and colours.
Holi celebrations start on the night before Holi with a Holika bonfire where people gather, do religious rituals in front of the bonfire, and pray that their internal evil should be destroyed as the bonfire starts. The next morning is celebrated as Rangwali Holi - a free-for-all carnival of colours, where participants play, chase and colour each other with dry powder and coloured water, with some carrying water guns and coloured water-filled balloons for their water fight. Anyone and everyone is fair game, friend or stranger, rich or poor, man or woman, children and elders. The frolic and fight with colours occurs in the open streets, open parks, outside temples and buildings. Groups carry drums and other musical instruments, go from place to place, sing and dance. People visit family, friends and foes to throw coloured powders on each other; laugh and gossip, and then share Holi delicacies, food and drinks. Some customary drinks such as those that include bhang (marijuana) are intoxicating. In the evening, after sobering up, people dress up and visit friends and family. Holi is a community festival which bridges the social gap. On this day colours of joy, happiness, friendship and love are painted in the life of each other.-Anumesh Rao/ VIII/ GH
Wednesday, 8th March: Special Assembly was organized on the occasion of Woman’s Day. Mrs. Sharmila Vijaywargi spoke a few words on this occasion. She told why this day is celebrated and the importance of woman in society. She also told about the achievements of women. Principal Mrs. Deepika Tandon further on added to her speech and made the students aware about what their mothers were doing for them. She told the students to respect and love their mothers because mothers cared for their children and looked after their family without seeking any reward.

Saturday, 11th March: Aryan Sirvi/ VII/ DH was selected as Student this Week. He was the first to set up a Musical Assembly. He has learnt to play five songs on the harmonium. 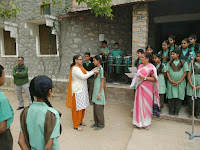 Thursday, 9th March: Class XII Board Exams started that day. They came to School to take blessings of Principal and Staff. After that they went to K.S. Lodha School, Falna to give their exams which is the centre of Board Exams for CBSE Schools of Bali Tehsil. Class X Board Exams started on 10th March. Best of Luck to Class XII and X students for their remaining papers.
Friday, 10th March: Fifty two students of the school had participated in Edu-Talent Global Olympiad. Twelve students secured position both at State level and National level. They secured these positions out of one lakh students from all over the country who had participated in the Olympiads.
RESULTS: