Mera Bali
Ashok Gehlot is an Indian politician from Rajasthan. He is Congress Party's national general secretary and in-charge of party affairs for politically crucial state Gujarat. He was the Chief Minister of Rajasthan from 1998 to 2003 and again from 2008 to 2013. He hails from Jodhpur city of Rajasthan in India and is a member of the Indian National Congress. He represents Sardarpura constituency of Jodhpur as Member of Legislative Assembly of Rajasthan.
Ashok Gehlot, son of Babu Laxman Singh Gehlot, was born on 3rd May 1951 in a Hindu Rajput family of Mandore, Mahamandir, Jodhpur, Rajasthan. A Science and Law graduate, he also holds a MA degree in Economics. He is married to Sunita Gehlot and has a son and a daughter. He is a Hindu and a member of the Indian National Congress (INC) party. He was influenced by the teachings of Mahatma Gandhi at a very young age and was actively engaged in social political work even as a student. During 1971's East Bengali refugees crisis he served in the refugee camps in the eastern states of India. It is there when former Prime Minister Mrs. Indira Gandhi first identified his organizational skills during one of her visits to the refugee camps. Gehlot was later appointed the first state president of National Student's Union of India and successfully organised Congress's student wing in the state.
Ashok Gehlot is considered as one of the most popular Chief Ministers of Rajasthan. During his tenure as Chief Minister of Rajasthan he was strong on development. He is often credited for his excellent drought management and creation of 7 million-days' employment during severe droughts in Rajasthan. 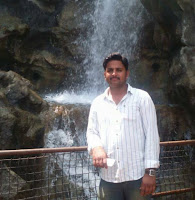 ALUMNI
Interview
(Ed:Editor, B.S :Brijpal Singh)
ED: What is your name?
BS: My name is Brijpal Singh.
ED: Which was your batch year?
BS: My batch year was 2006?
ED: Who were your batch mates?
BS: My batch mates were Pushpendra Singh, Yogendra, Ajaypal, Rahul Sharma & Raguveer Singh.
ED: Have you ever participated in any activities, tournament s etc.?
BS: Yes, I have participated in Football, Hockey and all sports activities.
ED: What are your present qualifications?
BS: My present qualifications are B.Tech (Electrical).
ED: What was your experience at Fabindia School?
BS: It was a great experience and the school is awesome.
ED: Will you like to give any message to your juniors, school, or friends etc.?
BS: Yes, I’ll like to say that study well, do hard work to achieve your goal

Wednesday, 16th August: Staff had PDP Session on that day. First Mr. Ajay Vijaywargi read out a thought from the book “Can We Teach a Zebra Some Algebra “by Debashis Chatterjee”. Staff then discussed their opinions and sent a write up with graphics and photo to Mr. Ajay. Then they got themselves divided into their groups and prepared a presentation based on the stories from the book” Is your Child Ready to Face The World by Dr. Sibal”.
Staff wishes Ms. Kusum Dangi a Happy Birthday and best wishes for her bright future. Ms. Monica Vaishnav was selected as the Teacher this Week for her sincerity and hard work towards her teaching.  Congratulations.
Interview
[ED: Editor, MVV; Monika Vaishnav]
ED: When did you join the school?
MVV: I joined the school in 2011.
ED: Who was the Principal at that time?
MVV: Mrs. Parineeta Ranpal was the Principal at that time.
ED: What type of environment was there?
MVV: There was a good environment. All students were disciplined and well-mannered and all teachers were co-operative and helpful.
ED: Which classes did you teach at first?
MVV: I used to teach Class II, III and IV..
ED: What is your qualification?
MVV: My qualification is M.A, BEd.
ED: What do you expect from the children?
MVV: I expect from all the children to be respectful towards their elders and others to be good citizens.
ED: Have you taught any school before Fabindia?
MVV: Yes, I taught in Noble School and Aadarsh Vidya Mandir.
ED: What message would you like to give to the students?
MVV: I would like to give a message to the children that they should have a dream and try their best to fulfill their dreams. 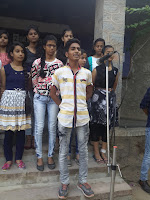 Ajaypal Meena/ X/ GH was selected as the Student this Week for scoring maximum number of goals (Out of 23 teams) in Under 17 District Football Tournament. He shared his experience with the students and told them how nervous he was on the field. But when Mr. Tarun Mishra motivated him his confidence level boosted up and he was able to score the maximum goal record in the tournament. Congratulations Ajaypal and always remain confident. 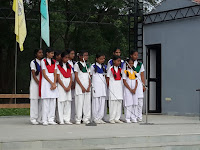 Tuesday, 15th August: Finally the Independence Day arrived, for which the school was practicing for so long. Principal, Mrs. Rajshree Shihag as the Chief Guest, hoisted the flag. After the National Anthem, the parade was inspected by the Principal. The students marched and did a PT display. Vice-Principal Mr. Byju Joseph spoke on freedom fighters and gave Vote of Thanks. Principal spoke encouraging students to understand the meaning of the freedom from mind sets and told them about the four messages given by former President Dr. AJP Abdul Kalam. Meenakshi Choudhary/ VIII/TH anchored the function. Krisha Dave/ IX and Kreena Rao/ IX spoke a few words on that day. Students of Middle Section presented Patriotic Song.  Mr. Ramesh Choudhary/ Parent sang a Patriotic Song and Mr. Shrvan Dave spoke a few words and told about the importance of Independence Day. They judged the parade. Once the whole function got over sweets were distributed among students. 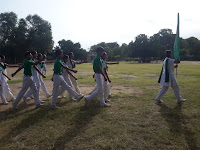 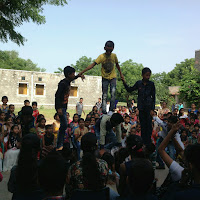 I Gandhi House
II Teresa House
III Dhyanchand House
For the ID parade, a representative contingent was sent to Government Senior Secondary High School, Bali, to participate in the 15th August March Past Parade. They stood First Position in the parade. Congratulations. 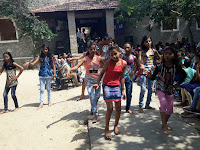 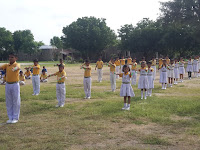 Saturday, 12th August: The School Football Team secured third position in Under 17 Football Tournament. Three students Suryabhan Singh/ X, Parikshit Singh and Yuvraj Singh are selected for the State Level Tournament. They will represent Pali District Team. The School is proud of them. Congratulations to all who are responsible for their success.
STUDY
Thursday, 17th August: Class IX presented a Radio Show under the guidance of their English Teacher Mrs. Bharti Rao. The whole class participated in it. They presented School’s history, news, quiz, interviews, jokes, enacted advertisements and sang a song. It was presented during break time and they presented a beautiful show.
Email ThisBlogThis!Share to TwitterShare to FacebookShare to Pinterest
Newer Post Older Post Home