We all want success in life but only few achieve.  Success is what we dream for but it does not come easily. If we love our work whether it is study or job and if you do it with interest it will definitely bring something good to us. If we love our work and we enjoy doing it, we will never get bored of doing it. Slowly with dedication we will be excellent in our areas and this will help us to be successful in our lives.  So we should concentrate more on increasing our knowledge and skills. All children are different and they have different qualities, so as a teacher he or she has to motivate and help the children to know in which area they are interested in and could do their best in it because if we choose a work which we don't love to do we will never be satisfied and happy. If we don't work with satisfaction and happiness it will never give us better output. So to fulfill our dreams we must do what we love to do and love whatever we are doing. This will create a positive and happy environment for us. -Monika Vaishnav/ Educator
ALUMNI

Siddhi Sharma (Batch 2006-2007) passed the school in 2007 and did her XII from Emmanuel Mission School, Pali in 2009. She completed her B.Tech, IT from JIET, Jodhpur in 2013. Then she did her M.Tech from Mody Institute of Technology and Science, Sikar in 2015. She is working as a Guest Lecturer in MBM Govt. Engineering College, Jodhpur (Electronics & Communication). Her message to the students is that ‘The future belongs to those who believe in the beauty of their dreams.’
STAFF 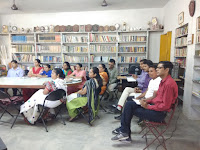 Staff had PDP Session with Chairman, Mr. Sandeep Dutt on 6th & 7th October. On the first day they had a Skype talk with Ms. Devyani Dutt who is helping the school to make presentation on The Fabindia School Case Study-Schools can Change for the Orlando Retreat in December. The presentation was shown to the staff and they were asked to give their comments or suggestions to make the final presentation.


On the second day first session was conducted by Principal Rajeshree Shihag. She discussed the learning from ‘Whatever it takes’. Staff was asked to give suggestions on ‘How can they handle slow learners. Staff came out with the following suggestions:
-All learners to be involved in activities.
-Connect, identify and understand the child and find a way to of his problem.
-Development of emotional attachment
-Extra attention to be paid on slow learners.
-Set up action teams to overcome challenges.
Educators should take everything possible so that learning is ensured.
In the second session presentations of each group were presented on the topics: Humility, Beating the odds, It is never too late, Handling Pressure, Courage & Making Mistakes, Accepting Flaws.
Staff congratulated Ms. Bharti Rao for completing her 13 years in the School 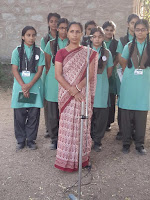 Friday, 6th October: Ms. Rajeshwari Rathore/ Hindi Department, was selected as the Teacher this Week for her sincerity towards work and hard work in getting admissions to school. She guided students about some easy yet high quality rules to be followed in their student life by giving a beautiful and motivational speech. Some of the rules are as follows:

Goal: Every student must have a goal that he or she is only preparing for that only.
Time Management: Every student must manage a regular time for any work and he or she must do it on time. Their all work should be done in time.
Hard Work: Every student must do hard work to achieve his or her goal.
Healthy Habits: Every student must have a healthy body that he or she could also have a healthy mind. He/ She should maintain healthy diet to keep themselves healthy
Create conducive environment: A child should create conducive environment to remain calm and concentrate in studies.
Interview
(ED: Editor RRE: Raj Rajeshwari Rathore)
ED: When did you join the school?
RRE: I joined the school on 4th August 2005.
ED: Who was the Principal at that time?
RRE: Mr. Jayant Biswas was the Principal at that time.
ED: What type if environment was there?
RRE: The environment was very good and helpful.
ED: Which classes did you teach at first?
RRE: I taught Class Nursery, Intro and Prep at first.
ED: What is your qualification?
RRE: My qualification is M.A.Bed. and NTT.
ED: Have you taught in any school before Fabindia?
RRE: No, I have not in any school before Fabindia.
ED: What message would you like to give to your students?
RRE: I would like to give the message that students should work hard to achieve their goal in life.
SERVICE 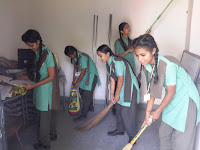 Monday, 2nd October: On the occasion of Gandhi Jayanti a special assembly was organized. Principal Rajeshree Shihag spoke on the importance and why is the day celebrated as Gandhi Jayanti, Ms. Kusum Sharma asked some questions related to Gandhiji. Kreena Rao/ Ix/ DH spoke on Gandhi ji and Diksha Choudhary/ IX/ GH spoke on Lal Bahadur Shastri. Cleanliness drive was organized for Classes II to X. Students were told about the importance and habit of living in a clean green environment. They cleaned their school campus. 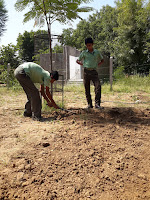 Class XI Sci.Bio students are doing organic farming behind Science Block. They started the farming in the month of August. First few days they had worked on cleaning the field and ploughing it. They had put some manure in the field. Then they levelled the field by using some farming instruments. After that they divided the area for different vegetables. Then they put some tomato plants in the left side of the field, within two days they watered and took care of the plants from grazing cattle. Till now they have put some onion seeds, peas and pulses seeds in the middle of the field. Now, their next plan is to grow flowers in the field for decoration.
Thank You Students
SKILL

Bhumika Rajpurohit/ Class III was selected as the Student This Week for being the youngest selected player in "Under 17 Football Tournament, held at Heritage Girl's School Udaipur.
Tuesday, 3rd October: Tattoo making activity was organized during Art and Craft lesson. Students of Classes VI-XII showed their creativity by making beautiful tattoos.

Red Colour Day was celebrated by the Pre-Primary Section. They enjoyed the day by having a creative Birthday Party. They were dressed in red colour and brought red colour fruits in their lunch boxes. 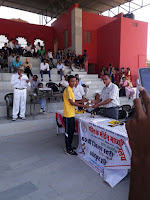 SPORT
Tuesday, 3rd October: A team of young athletes escorted by Mr. Tarun Mishra & Mr. Vineet Kumar participated in the 62nd District Level Athletic Meet  held at Jawali and Pali. Bhumika Nagar/ XII reached finals and bagged a silver medal in both 100m. and 200m. She is selected for State Level. Lalkar Singh Ranawat/ XI Sc. bagged a silver medal in 400 M Hurdles andhe too is selected for State Level. Congratulations to both of them.
STUDY 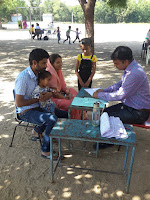 Saturday, 7th October: Result of Half Yearly Examination was announced that day. PTM (Parent Teacher Meeting) was organized for Nursery to XII. 100% Parents were entertained in the meeting. Majority of them were satisfied with their ward’s performance.