Learning Forward
QUALITIES OF AN EDUCATOR
One can become a teacher with qualification but you become an educator with qualification and qualities. It is qualities that make an educator stand apart. Every educator must have qualities like empathy, love, caring, understanding, discipline, honesty, hardworking, confidence, creativity, punctuality, dedication and motivation and mastery in his/her subject.
These qualities help an educator to understand students feeling which will be helpful in teaching. Besides teaching an educator also has to develop moral values in his/her students so that they not only are good in studies but also become good human beings. If an educator understands his/her students, he/she will be able to handle problems arising in studies and thus will have solutions for all problems. For example, if there are slow learners in the class the educator will know beforehand how to deal with this in the classroom and if necessary take extra lessons for them so that they are not left behind and neither will they feel neglected.
One quality which an educator must have is that whenever they go to any classroom they should be always smiling. When students see a smiling face they also feel happy and thus take interest in the teaching and will pay attention in whatever is taught. Shouting and punishment will never make students take interest in a class.
An educator must treat all students alike and solve all queries of the students. This will create respect in the student’s heart for the educator and students will know that they can approach the educator in times of their difficulties. They will remember you even after they have passed out of the school. Thus, Qualification and Qualities can make a teacher An Educator. -Mrs. Prerna Rathod/ Educator
ALUMNI

Nikhil Soni/ Batch 2011-12 topped his class with 9.6 CGPA and went to Kota for his further studies. He joined ALLEN Coaching Institute, Kota and did his coaching for IIT from there. He appeared for his IIT Exams and was able to get through his exams with flying colours. Nowadays he is doing his IIT Engineering from IIT College, Guhuwati. He misses and remembers his schooldays a lot. He was a very sincere and good in Academics so he was the favourite of his teachers and classmates. Other than studies he was a good speaker and debater. He participated in co-curricular activities in his school days. May God bless him with good health, happiness and prosperity!
STAFF 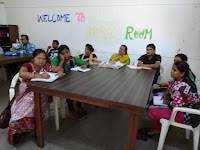 Tuesday, 26th September: Staff had PDP Session on that day. Mr. Ajay Vijaywargi read out a thought ‘Students are Host, not Hostages’ from the book “Can We Teach a Zebra Some Algebra “by Debashis Chatterjee”. Staff then discussed their opinions, gave their views and uploaded a writ up with graphics and photo in Alchemy of Learning. Staff is busy in correcting Half Yearly Exam sheets. To refresh themselves they enjoyed the day by doing Garba, the traditional dance done during Navrathri. 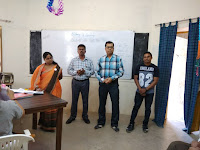