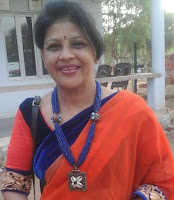 Earth day is celebrated every year on April 22nd as a   Mark to show the importance of environment for the survival of human beings. It was result of a historic treaty signed between 195 nations in 1970 to unite towards sustainable environment.

On this day various events are conducted to make people aware about the importance of various components of environment. For us, it is very important to know what is environment and why do we need to protect it. Environment is sum total of all natural forces like air, water, wind which help in survival. However over a period of last 50 years population has grown multi-fold but our environment has remained same.
With those limited sources only, we have to survive and even our future generations. Therefore its very important that we understand that every natural resource like water, oxygen which comes from trees, fossil fuels and every thing the earth is made of, is limited and has to be used judiciously.
Mahatma Gandhi had correctly said ' There is enough for every body's need but not for everybody's greed.Looking at out school, which has green certification is really a great n progressive step towards positive contributions towards the protection of environment. So today lets pledge that we will strive to reduce the pollution emissions in the environment and use environment friendly means in our day to day lives with the 4 R's Reduce, Reuse,
Recycle, and Recover.- Sharmila Vijayvargi/ Educator
ALUMNI
[ED: Editor, NS : Naushad Ali Sayed]
ED: Which was your batch year?

NS: My batch year was 2014-15
ED: Who was your favourite teacher?
NS: Ms. Parineeta Ranpal, Mrs. Bharti Rao and Mr. Krishan Gopal were my favourite teachers.
ED: Who were your batch mates?
NS: Shinu, Rishiraj, Dindayal, Krishnapal were my batchmates.
ED: Did you participate in any activities?
NS: I had participated in debate competition and all the sports activities..
ED: What are your qualifications?
NS:  I have done my M.A and would like to fight for Administrative Services.
ED: Tell us about your memories of the school.
NS: I remember all my days in school but the best day of my school days was when I became the Head Boy of the School and second when I received the Trophy of Excellence in Skill..
ED: What message would you like to give to the students?
NS: Students should be confident, work hard and speak from the heart..
NEWS & EVENTS 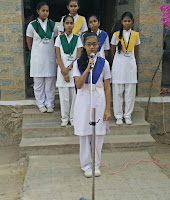 STUDENT THIS WEEK: Kreena Rao/ X was selected as the Student this Week for active participation and excellence in academics. She motivated the students by asking them to be self confident and work hard to achieve success. She also told the students to confidently participate in both co curricular and academic activities. She believes, love what you do! Success is no accident, it is hard work, perseverance, learning, studying, sacrifice and most of all, love of what you are doing or learning to do.
SKILL
आरक्षण
विपक्ष

Saturday, 21st April: On the occasion of World Earth Day a Special Assembly was organised.  Students were given the message to save earth and stop pollution. School started its first step by saving electricity. They switched off their electrical devices and sat in this heat without fans for an hour. Mrs. Sharmila Vijayvargi/ Educator gave an Assembly Talk on that day. Students of Primary Section put up a short program to give the message to save earth and stop pollution.
Kesar Sompura/DH/V gave a speech
Somyajeet Solanki/TH/IV gave a speech
Tiya Sompura/RH/IV gave a speech
Jyotirmay Nag/II recited a poem ' Save Earth' Alveera/II also recited a poem in  the assembly.
A play was enacted by the students of Class I and V to make the students aware about Earth day.

After the Assembly the School observed an Activity Day. In the first hour the Senior and Middle Section had IH Cricket Match between Gandhi House and Teresa. In senior section Gandhi House won the match. Gandhi House played finals match with Dhyanchand House in which Gandhi

House got First Position and Dhyanchand House stood second. In middle section there was a match for third position between Gandhi House and Raman House. So Gandhi House got third position in that match. Primary Section attended Dance Classes in the first hour. After that the school had lessons of Life Skills and GK.