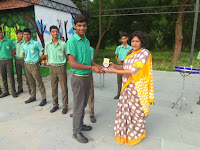 STUDENT: Icchuck Soni/XII was selected as the Student this Week for hitting 20 sixes at the Inter District Cricket Tournament.He was even declared the best batsman for his fabulous individual score in all three matches. 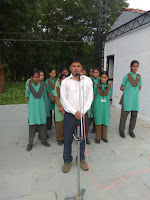 EDUCATOR: Mr. Suresh Negi was selected as the Educator this Week. He spoke on the essence of hard work. He narrated a story about a painter and a woman in whom the painter with his hard work became famous as Pablo Picasso and the woman remained in solitudes. He gave the message to work hard as it is the fruit of success.

ALUMNI:
[ED: Editor, AS: Arvind Singh Sonigara]
ED: Which was your batch year?
AS: My batch year was 2012-13.
ED: Which  was your favourite spot in the school? 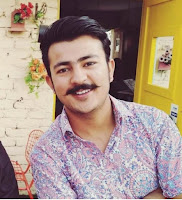 AS My favourite spot in school was the playground and behind the IV Block where we would hide from Principal Ma'am but it was fun. .
ED:: Who were your batch mates?
AS: My batch mates were Divya, Swabhi, Shefali,  Rozee, Sonika, Shaily,  Payal, Marudharpal, Gajendra.
ED: Did you participate in any activities?
AS: Yes I have participated in many activities such as debate ,poem ,dance,all sports event including West zone CBSE cluster.
ED: What are your qualifications?
AS: I am doing  my MA in Economics..
ED: Tell us about your memories of the school?
AS: I can unload bags of memories of Fabindia as it was the foundation stone for my life or what I am today. You can't describe in words I'm being nostalgic now but for an epitome I can say the head boy election which I fought in IX standard ,being the Captain of Green House and taking to zenith level. Being scolded by Principal Ma'am all the way along and many more.
ED: What message would you like to say to our students?
AS: I want the students to be calm and composite and shoot values with confidence in whatever you deal with .

PARENT THIS WEEK: Mr. Narayan Singh F/O Abhinav Singh/VI and Abhimanyu Singh/I was selected as the Parent this Week. He gave the message to respect their teachers. 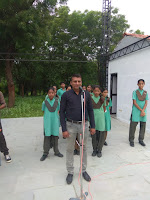 (ED: Editor, NC: Narpat Singh Chouhan)
ED: What do you do?
NC: I am an advocate.
ED: How many of your wards are studying here?
NC: My two wards are studying here Abhinav Singh/VI and Abhimanyu Singh/I.
ED: Have you achieved your goal?
NC: Yes, I have achieved my goal. I wanted to become an advocate and I have become one.
ED: What do you expect your children to do?
NC: I expect from both to do whatever they want to do in their life. By their achievement they should make me feel proud. I want Abhinav to join defence services.
ED: What do you expect from the school?
NC: I don't want anything from the school because I totally agree with what the school is doing for students.
ED: What message would you like to give to the students?
NC: I would like to give the message that they should always give respect to their teachers.
ED: Would you like to visit our school again?
NC: Yes off course, it will be a great pleasure for me 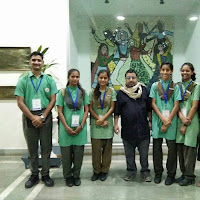 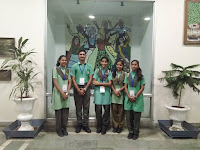 First of all I would like to thank ma'am Principal and all the teachers for giving me this opportunity. I had attended exchange programs and IIMUN conferences but this Silver Jubilee Commemorative Young Thinker's Conclave at the Mayo College Girls' was very different, informative and creative. We were escorted by Ms. Swabhi Parmar and I thank her for being so cooperative. I had participated in multi purpose debate preliminary bridge round, in this we were given a topic and we had to write 'for the motion' as well as 'against the motion'. We also attended the turncoat debate, the extempore and block and tackle and the debaters were just commendable. Our school also performed very well. There again we met Sir Pranab Mukherjee and truly speaking I'm blessed to meet such a great personality twice. We also participated in Quiz and I realized that I'm behind in general knowledge and I have decided to start reading newspapers and other source of information. Last but not the least , I will try to transform myself into the positive aspects I learned there. This is our last year but I hope and I get more opportunities like this, so that I can become a more better person. This experience and memory I am gonna cherish throughout my life.- Kirti Malviya/ XIIAs 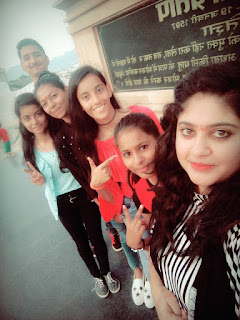 Thinker's Conclave, 2018 at The Mayo College Girls School, Ajmer. I would like to extend tremendous thanks to Principal Ma'am, for giving us such a wonderful opportunity. We had a great time over the past four days from 23/8/18 to 26/8/18. I and Divya participated in script writing. Our topic was "They did not have homes-  this side and that side of the border". We wrote a script of a play on this topic. We even visited nearby places like Ajmer Sharif and Pushkar.

During the closing ceremony, we were surprised and even shocked when our name was announced for the 'Best Critics Award' we were not at all expecting that. We were really happy. We were more delighted because we were representing our school over there.
The key points that I learnt there are:
• Winning is not always important, but participation and knowledge which we gain is most important.
• When during any competition, we are given any topic, we should not Google it and let Google direct our ideas, instead we should think and let our ideas direct Google.
Once again I am thankful to Principal Ma'am and the school for giving me such wonderful opportunity and memories which I will cherish lifetime.-Muskan Rathod/ XII 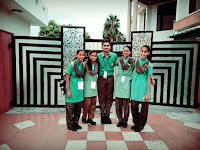 At first I would like to thank ma'am Principal for giving us this opportunity to represent our school in Mayo College Girls school for the Silver Jubilee Commemorative Young Thinkers' Conclave,2018. It was a great and my first experience there ,29 schools participated in the events. I, Divya Chundawat and Muskan Rathod participated in script writing and got the Best Critics Choice Award out of 19 schools from 7 states .
Interacting with others improves our vocabulary. I made many friends there. The best thing about our host school was that they all were very welcoming . I learned from them that we should also be welcoming and should speak in a proper and polite way with everyone . Remember others are reflection of our behavior , the way we'll behave we'll get the same ,through interaction we can exchange our ideas .We must know to build a conversation to make ourselves comfortable in our surroundings , which is important when we go outside for further studies .everything is important in life - enjoyment too .We had a lot of fun there , visited Ajmer Dargah and Pushkar .
In our school those who 're batch holders must know their responsibilities and authorities. Hope we all will organize this sort of events in our school .I would like to convey that whenever you get such opportunities please be the first one to grab them. At last I would like to thank ma'am Swabhi for being so cooperative and good with all of us, ma'am Bharti for informing us about this conclave and each and everyone who made our trip successful.-Divya Chundawat/XII

The first thing I want to do is to give a big thanks to Principal ma'am for giving me this opportunity to on a stage. Where I always want to go. I have taken part in many debates and quizzes ,I have seen many of them but what I saw in the Mayo College Girls School was something different. The standard is beyond my imagination.
There I had taken part in the quiz and English debate. Today, I will not tell you about what enjoyment we had there or what fun we had done. I will just tell you the things that I would like to do in the school. First the way of speaking in English  which M.C.G.S. had was outstanding ,this makes me realize that why we can't speak so fluently
Like them that's why we all have decided to start having conversations in English. Second the types of competition they have in their school. I would also like to have them in the school if ma'am permit me. Like block and tackle English debates in which I had taken part there. I was given only 15 minutes to prepare for my debate both in opposition and proposition I gave my best in that but still I need to stay updated and continue to do hard work. It is the key to success in last. I want to say thank to Swabhi ma'am to be good to us Congratulations to my team members who got the prizes and my friends. Last of I would just like to say that, "Jeetna jaruri Nahi shikna jaruri hai" because if winning makes you strong losing makes you stronger. Proud to be a Fabindian. Thank you .-Suryaveer Singh/XII 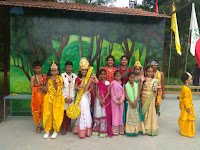 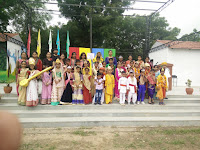 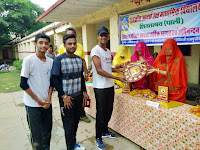 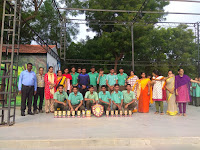 Wednesday, 29th August: On that day The Fabindia School had played Under 19 District Cricket Tournament at Shivtala. Students were trained by Mr. Tarun Mishra and Mr. Abhay. The School Team won the final match against Government School, Bali by 16 runs.
Congratulation to the team and their coaches for their fearless efforts and well deserving victory.
The team captain was Icchuk Soni. He was declared best batsman of the tournament. His innings was fabulous. His individual score was(68,94,45) in all three matches.
We are happy for their success. Keep it up!Wish you all the best for your next level.

Thursday, 30th August: The School U 14 Team participated in the Under 14 District Cricket Tournament. The team won the first match and reached the semifinals. They lost in Semifinals against Jubilee School, Falna. Congratulations boys for reaching Semifinals by 10 wickets. Kunal and Rahul heroes of the match. 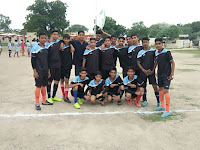 Saturday, 1st September: The School U 17 Football Team participated in the U 17 District Football Tournament. The team has reached the Finals. Congratulations boys for reaching the Finals. Wish you all best for your Finals. 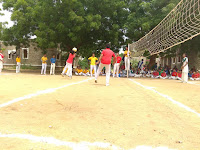 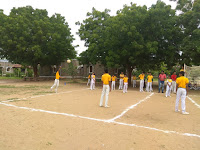 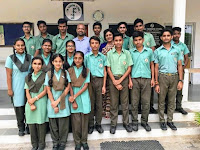 Tuesday, 28th August: Mr. Sajeth Pai Vice President at The Times Of India Group visited the school on 28th August 2018 to guide the students to choose their career prospects. He is an Alumnus of IIM Ahmedabad, published several articles in leading publications. He is closely associated with setting up the Bennett University in Greater Noida. It was great meeting him and conversing with him, we came to know about many new emerging professions, best colleges, scholarship programmes at different colleges and how to get into those foreign universities. He gave new direction to our thoughts and shared with us his life experience. The students are very thankful to him for taking out some time for them. Hope we get more opportunities to interact with him. 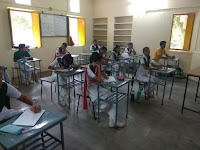 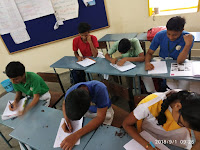 Saturday,1st September:To enhance the writing skills of the students of Class I-XI participated in the competition. They were given three topics from which they had to choose the topic of their choice.