STUDENT: Hemlata Vaishnav was selected as Student this Week. . She shared her views on importance of skills. She said that if you have a skillful teacher beside you, then you can refine your inner skills and achieve anything which you have in your dreams. She thanked Principal Ma'am and Hemant Sir for their guidance and support in fulfilling her dream in getting selected in a reality show for her dance.

EDUCATOR: Ms. Aysha Tak was selected as the Educator this Week. She shared her views on importance of kindness and narrated a story on being kind. She urged everyone to be kind to all living beings.
STAFF: All India Speech Competition on Deshbhakti Rashtranirman was organised by Nehru Yuva Kendra, Pali. Deepika Rajpurohit our Hindi and Sanskrit Educator secured 1st Position at the Block Level, will be representing the District. Congratulations and Best Wishes!
The Staff wished Mr. Jaffar Khan & Ms. Swabhi Parmar a Happy Birthday. May God bless them and Best Wishes for their future.
NEWS & EVENTS

Wednesday, 4th September: Under 17 Football Team won 2nd position at the District Tournament organised at Sadri. Anirudh Singh was awarded Man of the tournament.
Well done Fabindians and Abhay Raj Singh -Team Coach.
Hemlata Vaishnav/XII/GH, Dhawan Choudhary/VII/TH, Nehpal Singh/VII/TH were rewarded for being selected for next level of dance performance in Delhi. She along with others gave audition for dance at Ajmer where all of them were selected.

Thursday, 5th September: Educators were awarded Professional Learning certificates on the occasion of Teacher's Day.
School launched it's App: The Fabindia School App on that day.

Students gave a heartfelt tribute to the Educators and thanked them for their guidance and support. They celebrated Teacher's Day with full enthusiasm and fun. Students organised games, dance and songs performances for the teachers.  Different students became replicas of the teachers. Teachers played various games and participated in ramp walk. Later at the end, prizes were given to teachers and support staff.
In the Assembly, players were rewarded with trophies and certificates for being runner ups in The District Level Football Tournament at Sadari. Anirudh Singh Ranawat/XII/GH was selected for the state tournament and was rewarded with the best player of the tournament.
The School U-14 handball team escorted by Mr. Parikram Sir went to Bhaisana for participating in the District Level Tournament.
The School U-17 Cricket team escorted by Mr. Rahul Sir went to Sojat for participating in the District Level Tournament. 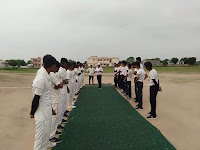 Saturday, 7th September: Today, My Good School Saturday was experienced in the school. Students of class X and XII had academic classes. Middle and Primary school had a speech competition on the topic of water conservation. Some also participated in the poster/drawing competition for water conservation. Later, Senior classes had clubs and societies lesson.
Under 19 Cricket Tournament District Level