Chittorgarh Fort is one of the largest forts in India. It is a World Heritage Site. The fort, popularly known as Chittor, was the capital of Mewar and is today situated in Chittorgarh. It was initially ruled by Guhilot and later by Sisodias, until it was finally abandoned in 1568 after the siege by Emperor Akbar in 1567. It sprawls majestically over a hill 180 m (590.6 ft) in height spread over an area of 280 ha (691.9 acres) above the plains of the valley drained by the Berach River. The fort precinct with an evocative history is studded with a series of historical palaces, gates, temples and two prominent commemoration towers. These monumental ruins have inspired the imagination of tourists and writers for centuries.

Chittorgarh Fort is stated that the fort was constructed by the Mauryans during the 7th century AD and hence derives its name after the Mauryan ruler, Chitrangada Mori, as inscribed on coins of the period. Historical records show Chittorgarh fort as the capital of Mewar for 834 years. It was established in 734 AD by Bappa Rawal, founder ruler in the hierarchy of the Sisodia rulers of Mewar. The fort was looted and destroyed at the hands of Emperor Akbar in 1568 AD and subsequently never resettled but only refurbished in 1905 AD. Three important battles were fought for control of the fort; in 1303, Ala-ud-din Khilji besieged the fort; in 1535, Sultan of Gujarat Bahadur Shah besieged the fort; and in 1567,Mughal Emperor Akbar attacked the fort.
Chittor is cited in the Mahabharat epic. It is said that Bhima, the second of the Pandava brothers of Mahabaharata known for his mighty strength gave a powerful hit with his fist to the ground that resulted in water springing up to form a large reservoir. It is called Bhimlat kund, an artificial tank named after Bhima. Folk legend also mentions that Bhima started building the fort.
ALUMNI

I am Jinkle Rajpurohit from 2004 batch. As Vimmy Rajpurohit called me the following school memories of my batch came into my memories. I always remember - this was the best batch ever...:) Actress Nandita Das had visited Fabindia school as  annual function dance choreographer. The 1st ever cricket tournament in Bali was won by Fabindia, The team captain was Lovson Melvyn and we won all the matches against the local schools of Bali We reached up to district level and lost in Semi Finals at Falna
We used to play hide and seek when the last block was under construction. In the year 2002, when we were in 8th std and 1 day before the annual function, the lead actor for the Lead drama of the function backed out and absconded. I was given the responsibility to take the lead role and learn all the dialogues in 1 day and executive in the main event. It was done successfully and better than the original one.
Participating in the High school March past and singing competitions for Republic day/Independence day was always fun, and winning it was even more exciting.  We used to request our teachers to teach in the open ground sometimes, it used to feel like a little picnic with studies and lot more. All these memories will always remain in my heart which I can never forget. I am thankful to all those who shaped me in The Fabindia School.
STAFF


School Staff had a meeting with Chairman, Mr. Sandeep Dutt. The agenda of the meeting was “Happy Teachers” how to have that in our School. The staff discussed one target that was Happy Teachers in School. That could be attained by working on the other four sections which were parents, students, freedom and target.
After this, the staff had a PDP Session in which they discussed their chapters and how far the story had reached. Names were given to each group of the PDP Session. The staff promised to upload their finished chapters by 15th October.
The whole week staff was busy making result, term-reports of SA I that had finished last week.
Mr. Rakesh Kumar had his birthday on 2nd October 2016. We all wish them a very Happy Birthday. May God bless them with good health, happiness and prosperity! The Staff gives their Heartiest Congratulations to Mrs. Bharti Rao for completing her 12 Years in the School.
SKILL
Monday 3rd October: Special Assembly was organised on the occasion of Gandhi Jayanti.

Kreena Rao/VIII/DH anchored the program
Tushar Diwakar/VII/DH made us aware of the history of Mahatma Gandhi.
Suryaveer Singh/X/DH spoke about Mahatma Gandhi’s life.
Some students of Class VI, VII and VIII performed a skit which depicted the Dandi March .
Choir sang the famous song of Gandhiji  “Raghupati Raghav Raja Ram”
Gandhi Jayanti
Gandhi Jayanti is a National festival in India. It is observed on 2nd of October every year. Mahatma Gandhi was born on 2nd October 1869 in Porbandar. His father’s name was Mohandas Karamchand. His mother’s name was Putli bai. He writes his father’s name in front of his name, that's why his full name was Mohandas Karamchand Gandhi. He is also known as Father of the Nation. He started Savinay Avagya Aandolan, in which he told all his citizens that whoever works under British rule, under Britishers factory and who wears clothes made by Britishers, we should stop to taking help from them. He started another law in 1930. He lead Dandi March to break the salt law. According to this law, the state had a monopoly on the manufacture and sale of salt. He told that we should fight for our salt that was the property of both poor and rich. It is such an essential item of our food. Mahatma Gandhi along with other nationalists reasoned that was sinful to tax salt. He and his followers marched for over 240 miles from Sabarmati to the coastal town of Dandhi where they broke the government law by gathering natural salt found on the seashore, and boiling sea water to produce salt. Mahatma Gandhi fought on the path of non-violence and gave freedom to the country. He was a great freedom fighter for our country. -Diksha Choudhary/VIII/GH
BAPU
Bapu is our inspiration
Who gives you destination
Bapu is a shine
Who gives us pride
Bapu is a candle
Which consume light
Bapu love us
Because Bapu want us
Babu you are right
Because you don't fight
You lead to the path of non-violence
And this is where you succeed.
Krisha Dave/ VIII/ GH
Bapu (Mahatma Gandhi )
Bapu, Bapu, Bapu,
You’re the Father of the Nation,
You erase our entire problem, from the evils,
Bapu fought with British to protect us.
Bapu fought with non violence,
Bapu opposed salt tax,
Bapu led the Dandi March,
Bapu you are the best in the world,
Thanks Bapu for giving us freedom.
-Anumesh Rao/VIII/GH
Interview
(Ed: Editors; Vu: Venus Upadhaya)
Ed: In which field you are an expert?
Vu: I have studied Journalism and I am working in Media and Education.
Ed: If you get an opportunity to change any part of the school, which part would like to change?
Vu: I think it is a perfect Green School, on sustainability. This school produces its own electricity; it has water harvesting system, so I think it is already perfect.
Ed: What do you find different in our school?
Vu: Vision of the school and the value system makes your school different from other schools.
Ed: Who is your idol?
Vu: I like lot of people, no specific person.
Ed: What was your success formula?
Vu: Our heart should be sincere and we should always listen to our heart.
Ed: What are your hobbies?
Vu: My hobbies are talking with children, walking and photography.
Ed: What was your goal?
Vu: Currently I want to work more and more with students, teachers and youth.
Ed: What feedback would you like to give to the students?
Vu: I want to say that love your school and always get engaged with your school.
SPORT
Tuesday, 4th Tuesday: A friendly football match was played between the students of class VII and VIII and basketball match between Class X and XI. Both teams were very excited and left no stone unturned to win the match. Class VIII and XI was the winner. The referee of the match was Mr. Tarun Mishra
STUDY
Wednesday, 4th October: Anumesh Rao/VIII/GH and Kinjal Rao/IX/DH appeared for Global Olympiad (English) and Himanshu Suthar appeared for Global Olympiad Cyber. The question paper consisted of 50 questions and students had to answer in the OMR Sheet. 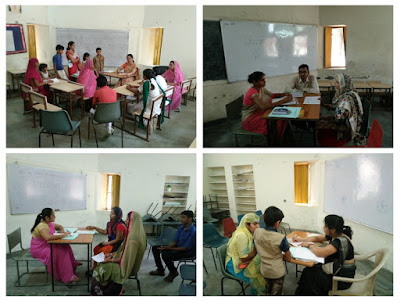 Saturday, 8th October: PTM (Parent Teacher Meeting) was organized for Class I to XII. About 50% parents attended the meeting. Majority of them were satisfied with their ward’s performance. Bus Service from their respective villages was provided for Parents to attend the meeting. Art & Craft, Music and Sports Activities were organized for Parents and Students in the Junior Campus. Parents and students together drew and coloured a painting of parent-student coming to school in the Junior Campus. Both of them sang songs and played musical instruments. Many sports activities were like cricket, basketball, football and ring were organized for the parents and students. It was a new experience for both parents and students. They went home happy and contended.

Thank You Mr. Parth Guin, Mr. Rakesh Kumar, Mr. Prakash Dangi, Mr. Tarun Mishra and Mr. Vineet Kumar for their contributions. It would have not been possible without their help.