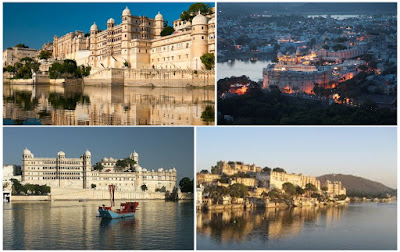 Udaipur is a very popular tourist destination known for its history, culture, scenic locations and the Rajput-era palaces. Udaipur was also voted as the best city in the world in 2009. Udaipur was founded in 1553, by Maharana Udai Singh II in the fertile circular Girwa Valley to the southwest of Nagda, on the Banas River. The city was established as the new capital of the Mewar kingdom. This area already had a thriving trading town, Ayad, which had served as capital of Mewar in the 10th through 12th centuries. The Girwa region was thus already well-known to Chittaud rulers who moved to it whenever the vulnerable tableland Chittaurgarh was threatened with enemy attacks. Maharana Udai Singh II, in the wake of 16th century emergence of artillery warfare, decided during his exile at Kumbhalgarh to move his capital to a more secure location. Ayad was flood-prone, hence he chose the ridge east of Pichola Lake to start his new capital city, where he came upon a hermit while hunting in the foothills of the Aravalli Range. The hermit blessed the king and guided him to build a palace on the spot, assuring him it would be well protected. Udai Singh II consequently established a residence on the site. In November 1567, the Mughal emperor Akbar laid siege to the venerated fort of Chittor. To protect Udaipur from external attacks, Maharana Udai Singh built a six kilometre long city wall, with seven gates, namely Surajpole, Chandpole, Udiapole, Hathipole, Ambapole, Brahmpole and so on. The area within these walls and gates is still known as the old city or the walled city.

As the Mughal empire weakened, the Sisodia rulers, reasserted their independence and recaptured most of Mewar except for Chittor. Udaipur remained the capital of the state, which became a princely state of British India in 1818. Being a mountainous region and unsuitable for heavily armoured Mughal horses, Udaipur remained safe from Mughal influence despite much pressure. At present, Arvind Singh Mewar is the 76th custodian of the Mewar dynasty.
STAFF
Saturday, 15th October: Staff had Annual Day Meeting after School. They discussed about the program, exhibitions and timings for the function. Duties were allotted to the Teachers. They were told to start preparation from Monday.  Congratulations to Kavita Devda from Staff for her newly built house. The school staff was invited for lunch to Mrs. Kavita Devda’s farmhouse on Friday.
SKILL
Dusshera is festival
of good over evil
This festival is also  for  people
who fight for wrong
Dusshera defines the power
of common man
Dusshera is right
because Ram fights
This festival is light
because it is full of shine
Krisha Dave/ VIII/ GH
Dussehra
Dussehra is a major Hindu festival. The other name of Dussehra is “Vijayadashami”. Dussehra festival generally falls around 20 days before the Diwali festival in the month of September or October. This festival signifies the victory of good over the evil, right over wrong, and virtues over vices.  People celebrate Dussehra with all enthusiasm, pomp and show. Different people have their own distinct cultures.
There are many mythological stories behind the great Dussehra festival. Once upon a time, the Prince of Ayodha, Prince Rama undertook 14 yrs of exile. When the exile period was about to end, Prince Rama killed the demon King Ravana. Thereafter, Prince Rama returned to his kingdom Ayodhya along with his wife Sita and brother (Lakshman). Here, Prince Rama stands for the good (virtuous) and the demon king Ravana stands for the evil (vice). This is one of the reasons of celebrating the Dussehra festival.
The 10 day long battle between Prince Rama and Demon Ravana is enacted in dramatic form. This dramatic form of folk art is known as Ram-Leela. People of North India celebrate the Dussehra festival by depicting the fight of Rama and Ravana with the help of some masked dancers.The paperboard made effigies of three principal demons of the Ramayana, the ten- headed Ravana, Meghanada and Kumbakarna are filled with explosives. Rama burns the effigies with the help of fiery arrows. A fair is held on this occasion at various places.
Dussehra festival is also celebrated in the name of Durga Puja in many parts of the country. There is also another story for the celebration of Dussehra festival. Dussehra festival is celebrated in the honour of Durga Maa who killed the demon Mahisasura. Boys and Girls of the Schools and Colleges enjoy their holidays on this day. On this day, everyone put on their new clothes and enjoy the festival with great joy.Anumesh Rao/ VIII/ GH
Thursday, 13th October: Special Assembly was organized in which Mr. Usman Gani gave an Assembly Talk in which he talked about the significance of Moharram and why it is celebrated. It signifies the first month of Islamic year. He said that it marked the struggle between Shia and Sunni sect.  It is believed that during this month, while on a journey, Hazrat Imam Hussain, his family members and a large number of his followers were surrounded by the forces of Yazid, the Muslim ruler at that time. During their serge, they were harassed and tortured, even some of them were put to death. On the tenth day of Muharram a large procession called Tagiya is taken out In some parts of the world, drinking posts are set up temporarily by the Shia community where water and juices are served to all, free of charge. Thus, this festival is celebrated for 10 days starting from the first day of Muharram.
Students decorated display boards with the monthly theme.’ Integrity and Authenticity’.  They wrote beautiful quotations and drew pictures to depict it.
Saturday, 15th October: Special Assembly was arranged in which Manoj Roy and Vinod Rai from Pali showed their talent in Paper Craft. They made beautiful flowers, birds, design etc. out of kite paper and asked the children to learn it to decorate their classes.
Monthly Theme: Integrity and Authenticity
Artwork by staff and students 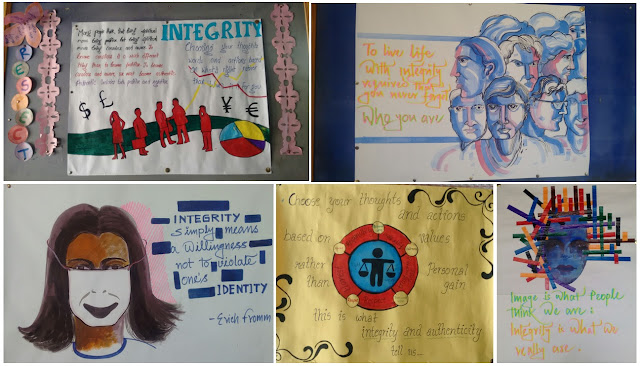 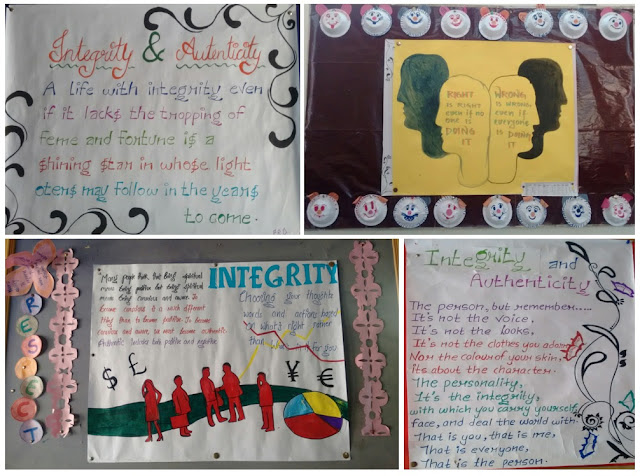