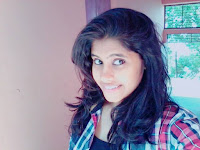 Divya Singh Chouhan passed her 12th from The Fabindia School in 2012-13. Her classmates were Shaily, Shefali, Yogendra, Ashish etc. She was good in academics. She completed her graduation from K.N. Girl's College, Jodhpur. She completed her post-graduation from JNVU. After completing her studies she chose her career as a teacher. She is a teacher in Central Academy, Jodhpur. Best of Luck for her future.
STAFF
Wednesday, 2nd May: Staff had a PLP Session with Chairman Mr. Sandeep Dutt. The session started with the giving away of certificates as a token of appreciation to all those who worked to make the Conclave a success. Support staff, Admin staff, LFIN Conclave Team received the certificates. Thanks to all of them, especially to Ms. Devanjali Dutt and Mr. Manish Chetri who extended a helping hand from their respective places.   Then the Minutes of the Last Meeting were passed. Then Summer Reading Project was given to the educators by Mr. Sandeep Dutt. My Good School Alliance and LFIN Plans and work at partner schools were discussed. Feedback of Edthena was given by Ms. Rajeshree Shihag. CMS was shown and explained by Mr. Pralay Nag.

Thursday, 3rd May: PLP Session was organised in which the educators sat in their action teams and discussed on the values given to them.

EDUCATOR THIS WEEK: Ms. Bharti Rao / Educator was selected as Educator This Week.
She shared her thoughts on 'Humility'. She narrated a story of George Washington and gave the message to the students to be humble, not to be proud as when pride diminishes and disappears humility increases and looms larger.

She also quoted Sir Chinmoy's quote:"The strength of pride must eventually surrender to the power of humility"

The Staff wished Ms. Urmila Rathod  a Happy Birthday. May God bless her and a bright future!

PARENT THIS WEEK
Ms. Kalpana Vaishnav M/O Harsh and Charu Vaishnav was selected as Parent This Week. She addressed the Assembly.

ED: How many of your wards are studying here?
KV: My two ward are studying here Charu and Harsh .
ED: Have you achieved your goal?
KV: No, I have not achieved my goal because I wanted to be a teacher.
ED: What message would you like to give to the students?
KV: I would like to give the message that they should develop in every field and concentrate on their studies
ED: What do you expect from the school?
KV: I expect from the school to become famous and popular in Bali area..
ED: What do you expect from your child?
KV: I expect from my children that they should never disobey their teachers and do well in studies..
ED: What difference have you seen in our school and other school?
KV: Along with Academics the school also provides an environment to develop in other activities which is not seen in other schools.
ED: Would you like to visit the school again?
KV: Yes, off course if  Principal ma'am calls me I would like to visit the school again

STUDENT THIS WEEK: Aryan Sirvi/ IX was selected as the Student this Week for scoring 100% in two subjects. He motivated the students by asking them to be work hard to achieve success and to have trust on themselves. He said that Skill represents the quality of a student. It is not possible that one student should have skill in all the areas but each and everyone has some or the other skill. Everyone should have trust on their skill .It is not necessary that by academics only you can get success you can also get success in skill area such as sports,   art ,music etc. but you should have trust on yourself.
Academic Excellence is necessary for Success
"Success is assured when a person fears the pain of regret more than the pain of the process". Good morning Respected Judges, Principal ma'am, teachers and my dear friends. Today I Suryaveer Singh stand before you to speak against the motion "Academic excellence is necessary to get success". And I am strictly against the topic.
Success is not getting a grade or degree, if that was it then why aren't all the graduates from Harvard, Oxford or Cambridge University successful? The rule of success is hard work and destiny of course. If a student of engineering gets good grades but he is not practically effective in relationship buildings and solving crisis or proper planning, even though he may be successful in getting a job but it will not lead him far. On the way he is sure to fade out.
If you look into the directory of successful people who are doctors, engineers and IT professionals, then you will notice that many of them dream to be employed by people like Bill Gates or Richard Bronson, who are prosperous despite not having college degrees. They are not the only one, other successful people are Stevie Jobs co-founder of Apple, Richard Branson founder of Virgin Atlantic airways, Virgin Mobile and other virgin brands, Dave Thomas founder and CEO of fast food empire Wendeys. In last I'll say just where there's a will there's a way, there is always a chance for everyone to be successful in life as long as the are willing to take on the challenges.
Thank you and have a good day.- Suryaveer Singh/ XII/ RH

Should there be Reservations
The system of reservation in India comprises a series of action measure, such as reserving access to seat in the various legislatures, to government jobs and to enrollment in higher educational institutions. Our constitution provided them with adequate opportunities for development.
I feel that reservation should not be there because it is an opportunity in which the people are not doing their work honestly. Some people are enjoying this opportunity because they feel that they can easily get job. Many non-reserved people have been educated in difficult situation, their hard work should not be wasted,  they have right to get equal chance so why not given a chance to non- reserved people also. They should also get chance to show their ability.

Reservation is  for backward classes or ST or SC people who is capable to do some work. It is good way in some job detail or educational so poor people can get equal opportunities and they can study well. Suppose there is a person who is good in studies, sports etc. If he or she will not get chance how can they show their ability or interest in their work.
My point of view is that reservation should be removed for SC, ST and backward classes. If there has to be reservations, then it should be based on economical conditions so they can get education. It should not be based on caste. By this they can get job opportunities.-   Mansi Choudhary/X/DH 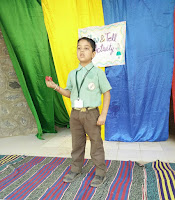 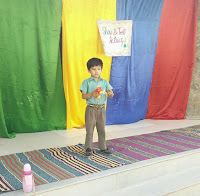 Friday, 4th April: Leaving behind the traditional 'chalk and talk' method of teaching; children of Pre Primary, developed language and communication skills through 'Show and Tell Activity.' All the students of Pre Primary Section took part in the Activity. They beautifully exhibited their speaking skills

Saturday, 5th April: To enhance language and communication skills Story Telling Competition was organised for the students of Primary Section. Each and every student participated in the competition. They related beautiful stories which had a moral. They were judged by their Class Teachers.

IH Debate Competition was organised for the students of Middle and Senior Section. The motion for Middle Section was 'Should there be Reservations'.
The motion for the Senior Section was "Academic Excellence is necessary for Success'.
Four students from each house and each section participated in the Competition. The exhibited high level of confidence. Each participant put their point of view in a splendid way. Their presentation was highly appreciable. Mr. Ajay Vijayvargi, Mrs. Prerna Rathod, Mrs. Jigyasha Gujjar and Mrs. Bharti Rao judged the competition.  Results awaited