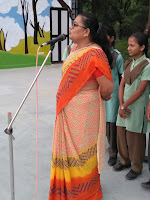 EDUCATOR: Ms. Bharti Rao was selected as the Educator this Week. She shared a thought on optimism. She related a story and asked the students to be positive thinkers as it will bring success in their life.
ALUMNI
[ED:Editor,TC: Tamanna Chouhan ]
ED: Which was your batch year?
TC: My batch year was 2012-13.
ED: Who was your favourite teacher?
TC My favourite teacher was Mr.Krishan Gopal Dave.
ED: Who were your batch mates? 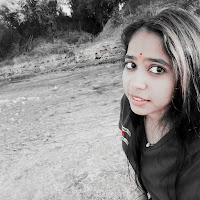 TC: My batch mates were Shraddha, Prachi, Himanshi, Shinu, Krishnapal.
ED: Did you participate in any activities?
TC: Yes I have participated in many activities such as Quiz competition, Debate, Extempore,  Singing, Dancing, Rangoli, Best out of waste,  etc.
ED: What are your qualification?
TC: I have completed my Graduation.
ED: Tell us about your memories of the school?
TC: It was a wonderful experience of my life, infact a very important part of my life, I feel so blessed and happy when I hear myself as a Fabindia, as Fabindia gave me a lot of opportunities to develop and enhance my skills, the journey of being a student in Fabindia was cherishable.
ED: What message would you like to say to our students?
TC: I would like to say that always participate in all activities which the school gives, as it not only improves your inner skills but also helps u to be a good decision maker and you develop the value of helping and sharing..
ED: What are you doing these days?
TC: I am doing my Post Graduation in Political Science.


STAFF:  Educators had  LFIN Saturday. Their first session was My Good School. There they discussed their My Good School Saturday. Next session was PLP in which the Educators had a session with their Action Teams. After they had Brewing Knowledge Session along with Fedena. The last Session was School Development Leadership Program in which they discussed about Personal and Social Development Program and had HOD Meeting.
The Staff wished Ms. Kusum Dangi a Happy Birthday. May God bless her a bright and prosperous future!


SKILL
A Lost Person- Lakshya
Today I met a person named Lakshya, professionally a storyteller. His way of telling stories and expressing his thoughts was really very impressive and made me curious to know more about him. I felt him totally a different person and so I decided to know more about him. I followed him from place to place, city to city in order to collect more and more information about him, all because of my passion that forced me to follow him to every place where he used to go.  The best gift of human 'the social site' eased my work.  When ever he went  to any place in search of a new story,  I easily got his location.
What I have noticed after following him was that, whenever he went to any place in search of any story, he changed his identity, his look, his name. This made difficult for them to remember him for long. He has written so many stories based on real life, fiction, mysteries but the only story which changed his life is his own life story.He has struggle for so many years to reach at a point where he was standing, higher than the Mt. Everest, high above the universe; where one needs faith to reach at.
He has become a famous personality whom everybody wants to meet. All because of his autobiography 'A Lost Person' written by him.This book better describes him than his own self and tells us that that how a lost person became a famous personality. How after a number of rejections a person reached his destiny.
This whole book is concluded in some lines -It tells us that if a person is a liar than he is a storyteller. The only difference between a story and a lie is that a lie can hurt someone but a story doesn't. Stories are powerful and can change the world.
It also took time for me to become his student. He tells me how a sensitive child ,who is afraid of everything becomes friendly to everyone; and how one day he starts writing which never stops till now. So much time he is bullied because of his silent behavior but that doesn't  stop him. He goes on getting inspired by himself. Rejections are more than the support in his life but he continues on his way.
A storyteller whom you all know is not just  a person who can change the world but a lost person who sees the world from deep inside.- Suryaveer Singh/ XII/RH 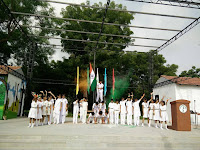 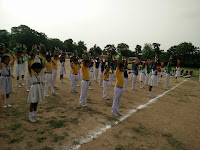 Wednesday, 15th August: Finally the Independence Day arrived, for which the school was practicing for so long. Principal, Mrs. Rajshree Shihag as the Chief Guest, hoisted the flag. After the National Anthem, the parade was inspected by the Principal. 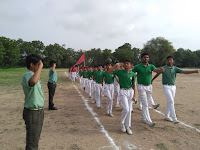 The students marched and  students of Primary Section did a PT display. Bhageshri Mewara/XII spoke on freedom fighters and Avinash Sain/ XI gave Vote of Thanks. Principal spoke encouraging students to understand the meaning of the freedom. Bhageshri Mewara/ XII/TH anchored the function. Himantika Chouhan/XII gave a speech on that day. Students of Middle and Primary Section presented a Patriotic Song and Patriotic Dance.  Ms. Swati Sood and Mrs. Bharti Rao judged the parade. Once the whole function got over sweets were distributed among students. 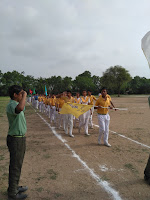 For the ID parade, a representative contingent was sent to Government Senior Secondary High School, Bali, to participate in the 15th August March Past Parade. They stood First Position in the parade from the thirteen schools that participated in the parade.  A troupe of dancers was sent to participate in Government Senior Secondary High School, Bali. They secured Second Position from nine other schools that participated in the dance. Congratulations