LEARNING FORWARD
EDUCATION-A FUNDAMENTAL RIGHT
Education is a fundamental  right of every individual. It is important for the progress of an individual and of the nation. The children at school. are taught to read and understand how they can be used in their day to day life. Students learn different subjects and gain knowledge about different subjects and topics such that they can be useful in their day to day activities and, events and life. They learn how to live in the society. The children learn to live with other students which helps them to be an important part of the nation. The children learn at school to behave properly as taught by the teachers. Apart from knowledge they learn how to work in teams. In India we find loads of books in bags and bulky answers in their notes. Do we know that at least twenty percent of the students are able to by heart the answer to the questions and the others are not interested as the answers seems to be too big. To improve this system of education the practical skills of education should be introduced in the primary level. This will help us to solve the problems of unemployment in their near future. Teachers should keenly look into the appropriate interests of every child and help them and their parents so that they can help them to choose the stream of education they want to go through. Nowadays job insecurity haunts every college pass out students. This is why vocational education must be introduced in the secondary education itself. It will also help them to choose jobs orb do their own business. It's a very vast topic for which everyone in education sector is concerned about.-Mr. Kailash Kumar/Educator 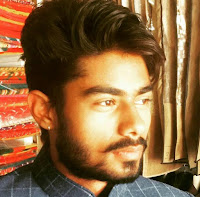 ED: Which was your batch year?

MS: I left school in 2012-13.
ED: Who was your favourite teacher?
MS: My favourite teacher was Krishan Gopal Sir..
ED: Who were your batch mates?
MS: My batch mates were Manisha, Swabhi, Sonika, Arvind, Anurag, Yogendra, Yogesh etc.
ED: Did you participate in any activities?
MS: I have participated in House Campaigning, Football Matches and Hindi Plays on Annual Function..
ED: What are your qualifications?
MS: I have done my B.Com. and am doing a job in the Bank.
ED: Tell us you memories of the school?
MS: It was a great experience studying here. Fabindia was the best part of my life, the time I spent here is cherishable and memorable too....... I learned from the best teachers hera and my classmates were helpful guide for me. The moments of the school will always have an imprint in my heart. I say it very proudly that I'm privileged to be a Fabindian.
ED: What message would you like to give to the students?
MS: I would like to tell you all that there are hard times in our lives and even in studies we face some issues. We should not hide those issues, we should share it with our teachers for they are the best ones to solve our problems. Most important is that we should honestly respect our teachers, this quality can only lead you to success in flying colours.

PARENT THIS WEEK
Mr. Naveen Upadhaya F/O Ronak Upadhaya/V was selected as the Parent this Week. He gave the message to inculcate the habit of self study for a successful career

(ED: Editor, NU: Mr. Naveen Upadhaya)
ED: What do you do?
NU: I am a lecturer in a Government School.
ED: How many of your wards are staying here?
NU: My one ward Ronak/V is studying here.
ED: Have you achieved your goal?
NU: No, I have not achieved my goal yet.
ED: What do you expect your children to do?
NU: I expect from my child to be a good citizen.
ED: What do you expect from the school?
NU: I expect from the school to help children to develop their personality.
ED: What message would you like to give to the students?
NU:  I would like to give message that they should develop self study in them for a successful career. 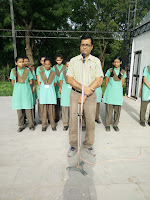 STAFF
EDUCATOR THIS WEEK: Mr. Krishan Gopal Dave had been selected as the educator this week.He shared his views on the essence of hard work, hard work is the only way to success. He is one of the favourite teacher of the students. He told them that they should try again and again, only then they will be able to face their failures and achieve success. He related the doha "करत करत अभ्यास ते जडमती होत सुजान रसरी आवत जात ते सिल पर पडत निशान।"

School Executive Mr.Sandeep Dutt and Dean LFIN Mr. Ajay Vijaywargi attended the Scoo News Global Educators Fest 2018 at The Durbar Hall, Fateh Prakash Palace, The City Palace, Udaipur from 3rd August-4th August. They attended workshop on ‘Technology Enabled Assessments’ on 3rd August and US News Global Education organised a workshop on 4th August. The workshop started with the welcome address by Mr. Ravi Santlani. The opening keynote was given by Yuvraj Lakshyaraj Singh.A number of sessions from 8.00 AM-7.15 PM were attended on both days. A number of School Executives, Principals, Educationists attended the Fest. The main theme of the Fest was 'How to make India a Global Education Powerhouse' and 'Nurturing Future Young Entrepreneurs'. 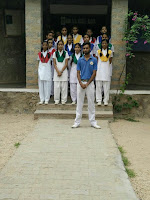 STUDENT THIS WEEK: Gajendra Singh Deora/XI was selected as the Student this Week for artistic skills. He expressed his views that how his friends motivated him to showcase his talent to a larger audience by making use of technology. He said that God has gifted everyone with a talent and if we use that talent then it is gift to the God.

Friday, 3rd August: Launchora is a story telling platform where you can create, publish, explore and read stories. A creative workshop was conducted for students by Lakshya Datta, the founder/ CEO of Launchora .He gave a challenge to the students to create a story on him. Fifty Eight students published their stories on Launchora. Out of the 58  stories the best story that was chosen was of Archana Koratkar/ IX/ GH. She was gifted a gift of appreciation. 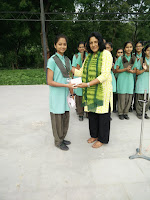 The Success Story
It was the season of spring when he was playing cricket with his friends. His friend hit a six
and the ball disappeared in the bushes. It was dealt that he has to bring that ball as he was nearby. He was looking for the ball and became too busy to spot the deep pit. And his leg was badly injured. He cried at the top of his voice. All his friends came to see what happened. The friends still stood when they saw him. His leg was bleeding, he was not able to move. A friend named Rahul, went and called his parents and later ambulance was called. He was admitted in the hospital.
The doctors reported fracture in his right leg and several injuries on arm. Doctors said that it would take about three months to get recover.He had an operation and was relaxing in his ward. He was continuously telling his parents that he was bored. A very interesting fact was that he did not like to use smartphone. Similar to this, he did not like many ordinary things like eating junk food (which was a good habit), sitting in silence for much time, reading books and singing. He would do all these things sometimes, but except for reading books. He was not fond of reading any book. But nothing was there to do in the hospital, so he picked up the book 'Adventures of Huckleberg Finn' and started seeing the pictures and suddenly a line attracted him and started reading from that. Gradually his interest was developing ; this sorted out the problem of his reading. He got that much of interest that he could not leave the book. He completed the book in just two days. Everyone was just wondering what they have seen. None was believing it. He?, the one who had never touch story books, was reading it interestingly. After at least two months, he was discharged from the hospital.  After some days, he went to school.
His school life was good. He was a middle-bencher. He scored about 75% to 85% in all subjects. He had lot many friends. His interest of reading increased when he saw a thousands of books in the library. He had entered first time in library after school. Everyone was shocked. By time, he must have read about 15 story books in just two months. Due to this, he had positive results towards studies. His vocabulary was almost full; his English became superstar.
Once in the school, there was an Inter Class Story Writing Competition, where he wrote a marvelous story and  surprisingly, he got second position out of fifty students. This result was surprising for him as well as for everyone. Now he was at the top most level for happiness and confidence. When he was free, instead of playing and talking, he used to write stories. Everyone appreciated his skill and talent. He got many awards for his stories.
From now onward, he decided to make stories, his career. He started to write many stories and started publishing it. But for convenience, he got a brilliant idea. He thought of designing an app for stories where he could publish and thought if everyone could read and publish.He launched an application named 'LAUNCHORA' and it became a very big success for him. It now connects 'storytellers'  from various countries. Everyone must publish a story on this app. Everyone must try it. It empowers  children to express their stories at international level. This was the success story of a brilliant man - Lakshya Datt.-Archana Koratkar/ IX/ GH 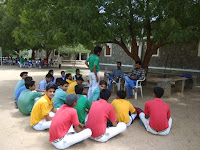 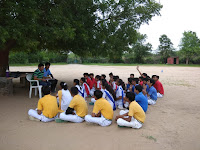 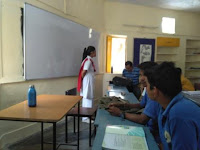 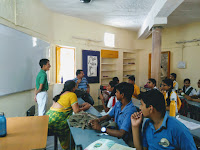 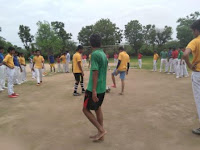 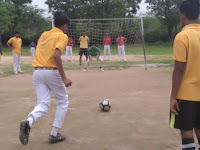 Inter House Football Match was organised for the students of Class VI-XII. Dhyanchand House and Raman House reached the finals, in which Raman House won the match. Dhyanchand House bagged the second position. Hardline was played in which Gandhi House bagged the third position by winning against Teresa House.
'Heidi' Movie was shown to the students of Class IV-VII. They enjoyed seeing the movie. 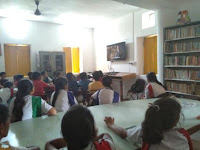 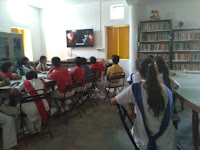