Wishing all our readers a very Happy New Year!
STARS THIS WEEK

STUDENT: Ramesh Dewasi / VIII was selected as the Student this Week for his musical passion and participation at the musical events. He shared that music is eternal part of every human being and it's a great stress buster. He sang a beautiful song for all of us.

EDUCATOR: Mr Jitendra Suthar was selected as the Educator this Week. He narrated his real school life story when he was in class 12th. One day he along with his friends started teasing his teacher by some nicknames, then that teacher advised them that whatever they want to do they can do but in future they should not embarrass themselves and the teacher. He quoted that “Respect is earned. Honesty is appreciated. Trust is gained. Loyalty is returned.

PARENT: Mr. Chandan Sompura f/o Kesar and Jayesh Sompura was selected as the Parent this Week. He visited the School and was interviewed by the Editorial Board.
ED: What do you do?
CS: I am a Temple Architect.
ED: How many of your wards are studying here?
CS: Two of my wards are studying here; Kesar Sompura and Jayesh Sompura.
ED: What do you expect from the school?
CS: I want the school to maintain discipline as it is being maintained now at school. School should emphasis on moral values like  respect, kindness etc.
ED: What do you expect from your child?
CS: I want my wards to do what they like. They are free to choose their career. I will not force them, it is based on their choice or hobby.
ED: Have you achieved your goal?
CS: Yes, I have achieved  my goal. I wanted to became an architect and with  my hard work and determination I have been able to achieved it.
ED: What message would you like to give to the students?
CS: The students should be in discipline and respect their  elders .By studying  only they will not be successful,  they need to follow their dreams. 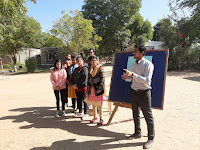 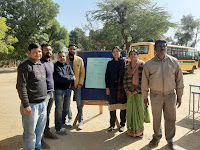 STAFF:  The School observed a LFIN Saturday in which they attended four sessions conducted by the Principal, Ms. Rajeshree Shihag and Mr. Ajay Vijayvargi. They had My Good School Session, PLP Session, Session on Experiential Learning and Session on Report Writing.
Mr. Krishan Gopal and Mrs. Bharti Rao went to Delhi Public School, Jodhpur to attend an Orientation Program organized by CBSE. The resource person was Ms. Rita P. Taneja. The Session included CBSE Examination 2020 and Spot Evaluation. The Power Point Presentation included the various duties & guidelines for the various  In charges during examination and evaluation.

Monday, 6th January: School reopened after a fifteen day’s winter break. All students were happy to return to school. Bright cheerful faces could be seen catching up with stories and incidences from holidays and greeting each other. Students of X and XII have finished with their Pre Boards and are preparing for their practical and the Boards.
Soumyajeet Solanki of Grade 5 has been ranked 1st in Asia as a young explorer and enthusiast. He has earned 7292 Gravity points and 6 Badges quizzing about astronomy.

Tuesday, 7th January-Friday, 10th January: Four days ATL workshop was organized in the School  by Electronic experts and Founder of ETech robot Mr. Yash Jain and Mr. Saurabh. In the workshop, students of Classes 8th to 12th were trained for using different sensors and also they were explained about Ideating and Prototyping for Projects.
Session based workshop was conducted for students who made some projects like Gas Sensor Device, Clap Switch, Heart rate calculator, Bluetooth ROBO car for upcoming ROBO SOCCER Competition.
On the final day, both the experts and ATL In-Charge, Jitendra Suthar helped students in completion of their on-going projects.

Friday, 10th January: Some students of Class 8th & 9th who had taken extra subjects as tourism and agriculture visited a warehouse in Dalop village. First they met Mr. Yogendra Singh  in-charge of the warehouse . He explained the various methods step by step such as cutting, washing, grading, storage and packaging of vegetables. He also showed functioning of deep freezer. There they learned how vegetables are taken from the farms and the whole process of sending the vegetables to other places .There were large containers in which they kept the vegetables and in big refrigerators after washing the vegetables. These vegetables are grown in an organic way and it is good for our health. 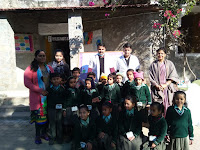 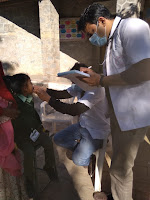 Friday, 10th January: Dental check up was organized for Pre Primary students on, 10 January, 2020.  Dr. Raguveer Singh Chouhan with his team, visited school to check the toddlers. Students of Pre Primary section got a chance to interact with the doctors. A diagnostic check up was done by them.

Saturday, 11th January: Ten Students of Class 8th & 9th, Ms. Monica Vaishnav & Mr. Urvish Singh have gone to Delhi to attend Children's Climate Conference held at National Bal Bhawan, New Delhi organized by Green Mentoring& Solutions PVT.LTD, powered by Law of Nature.
The GPS Climate Change has rated our institution as a GREEN School. It is a testimony that the school has worked consistently on a sustainable model of personal and social development.
Congratulations to the audit team!