STUDENT: Harshvardhan Singh/IV, Student this Week shared his views on sincerity towards work. He said sincerity is dedication towards work and our focus towards work. Sincerity can very easily be called the foundation of every great thing that has ever happened to mankind. Sincerity is a mix of seriousness and honesty. If you do things with sincerity, people will trust you.

PARENT: Mr. Inder Vaishnav F/O Hemlata Vaishnav/XII Sonia Vaishnav/X and Kapil Vaishnav/ UKG was the Parent this Week. He was humble towards the opportunities the school provides to the students. He suggested that we should use all the resources efficiently to improve our learning.

ED:What do you do?
IV:I am a priest at a temple.

ED:What are your expectations from the school?
IV:I expect that each student studying in the school should learn something and achieve their goals and should make their parents feel proud.
ED:Are you happy with what you are doing?
IV:Yes, I am very happy with what I am doing but I would have been even happier if I would have been able to pursue my dream of doing a business. I wanted to be a businessman but because of some family commitments I couldn't achieve my goal.
ED:What message would you like to give to the students?
IV: They should respect their elders and use the resources efficiently to improve their learning.

STAFF:  On Learning Forward Saturday we had a session on importance of My Good School, the session was convened  by Mr. R.P Devgan, Chairman LFIN. He shared the importance of Clubs and Societies and also elaborated the growing demand of activities at schools. 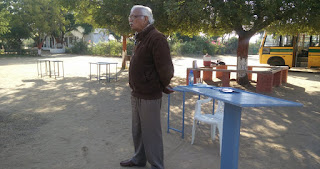 * Importance of First Add Club for teachers and parents.
* Every child is different so no same formula can be applied to all.
* The versatility of teacher helps child a lot.
* Children should be given freedom to take challenges.
Brewing Knowledge session was conducted by Mr. Krishan Gopal,  Educators worked in groups for editing blog post.
In the PLP session all educators did group/ individual reading and discussion.
Session on Project Planning for subject enrichment was discussed for better Learning Outcomes, session was conducted by Ms. Rajeshree Shihag. The educators worked in groups to plan projects.

Monday, 19th January: To enhance reading skills school has collaborated with fREDOm Reading Lab. It's a reading app for Nursery to Grade IV.   Through this app, children can choose to read, watch or listen to a story, a new story every single day. Stories are based on themes, like nature, animals, funny, adventure, family, maths etc. There is a quiz at the end of each story, to earn points to unlock exciting stories. This is an activity-based reading App and each activity addresses a particular skill. It also provides news feeds to the kids.

The School is happy to announce that Khush Rajpurohit has qualified Level II SOS International Math Olympiad with 86.67%

Friday, 24th January: Special Assembly was organized in the Pre-Primary section to celebrate Republic day. The event was inaugurated with a  speech on the importance of Republic day celebration and the role of freedom fighters by our educators.  Under the guidance of Sports Teacher Mr. Abhay Singh exercise, were performed by the students.  Patriotic songs were sung by students and educators. 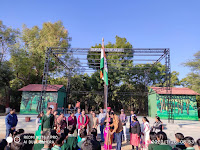 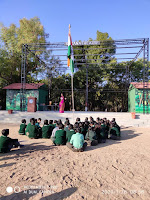 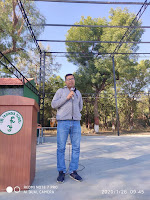 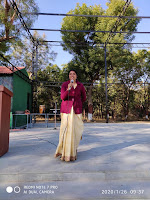 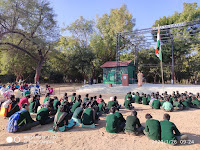 Ms. Bharti Rao shared stories of unsung heroes from Independence Era.
She talked about:
Matangini Hazra was part of the Quit India Movement and Non-Cooperation Movement. During one procession, she continued to advance with the Indian flag even after being shot thrice. She kept shouting "Vande Mataram" .

Begum Hazrat Mahal was a vital part of the 1857 Indian Rebellion. After her husband was exiled, she took charge of Awadh and even seized control of Lucknow during the rebellion
Bhikaji Cama was not only a part of the Indian Independence Movement, she was also a 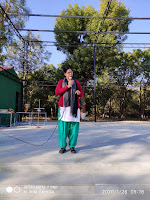 figure for gender equality. She donated most of her personal effects to an orphanage for girls. She also unfurled the Indian flag at the International Socialist Conference at Stuttgart in Germany, 1907.
Tara Rani Srivastava along with her husband, led a procession in front of the Siwan Police Station. Though he was shot, she bandaged his wounds and kept going forward. By the time she returned, he had died. However, her will to go on was stronger still and she continued to fight holding the flag high.
Kamaladevi was the first woman to run for a legislative seat in India and interestingly, she was also the first Indian woman to be arrested by the British regime. She played a very vital role as a social reformer and brought back handicrafts, theaters and hand-looms to help in uplifting the socio-economic standard of the Indian women.

To mark the happiness sweets were distributed amongst all.

For the RD parade, a representative contingent was sent to Government Senior Secondary High School, Bali, to participate in the 26th January March Past Parade. They stood Second in the parade out of ten participating schools. The contingent was led under the guidance of Mr. Rahul Thakur. 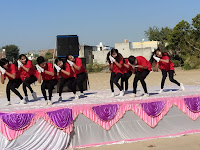 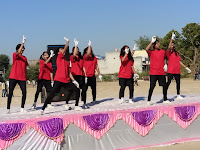 A troupe of dancers was sent to participate in Government Senior Secondary High School, Bali. They secured First Position from nine other schools that participated in the dance. Our students mesmerized the audience and won the prestigious trophy. It was choreographed by Mr. Hemant Birawat. Congratulations to all the Fabindians.