STUDENT: Vinay Pratap Singh/ VI was the Student this Week for his passion for Cricket. He shared his views on how to develop passion for cricket. He shared that playing cricket was his hobby. Whenever he has free time he practices cricket. He dreams to become a cricketer in future. He quoted, “I tend to believe that cricket is the greatest thing that God ever created on earth.” “Enjoy the game and chase your dreams. Dreams do come true! “

EDUCATOR: Mr. Rahul Kumar Thakur was the Educator this Week. He shared his views on "Importance of Sports". He shared that there are many things in sports which we can use in our daily life.He shared some important topics which sports teach us like discipline,friendship,team work,leadership and overcoming adversity. He shared that sports also teach us these values. He explained that in sports discipline is needed. Without discipline we cannot play the game properly. In team work we shouldn't use "I". We should use "we". Sports also teaches us the value of friendship. He ended with a beautiful quote, "Don't prove yourself improve yourself". 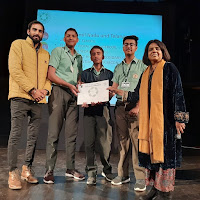 Saturday, 8th February: Humming Bird is a Science Olympiad which was held in  November .It was in Math, English, Science and Hindi subject.From our school 37 students had participated and from 37 students, 13 reached the second level. Dakshita Sirvi/ VII VII, Yamini Rathore/VII and Meenakshi Sirvi/VIII received Gold Medal. Riya Vaishnav/VIII received Silver Medal.Tanisha Malviya/VIII received Bronze Medal. Thirteen students received Certificate of Merit. Ms. Urmila Rathore/ Educator received a certificate as the Coordinator of the Olympiad. Ms. Rajeshree Shihag/ Principal received a certificate for the best Academic Performance of the School in the Olympiad.