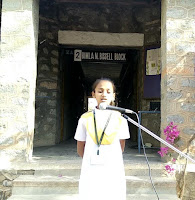 STUDENT: Divya Chouhan/ VII was Student this Week for her zeal and genuineness towards class activities. She narrated a story on 'Being Helpful'. There was a small boy named Shankar, he belonged to a small and poor family. One day, he was crossing through the forest carrying some wood, he saw an old man who was very hungry. Shankar wanted to give some food to him, as he had no food he continued walking.  On his way he saw a deer who was very thirsty, he wanted to give him some water but again as he did not have water he continued walking. Then he saw a man who wanted to make a camp but he did not have wood, Shankar gave him some wood and in return got some food and water. He was very happy to help the man and to receive food and water. Now he went back to the old man and gave him some food and gave some water to the deer. The old man and the deer were very happy. Shankar then happily went on his way.
Few days later Shankar fell down a hill, he couldn't move as it pained a lot. There was no one to help him come up, the old man whom he had helped saw him and rescued him.  He was badly wounds and to his surprise the deer whom Shankar had fed water got herbs from the forest to heal his wounds. Like this the old man, the Deer and Shankar helped each other in time of need. This way they all became happy.
She quoted 'The purpose of life is not to be happy. It is to be useful, to be honorable and to be compassionate'.

EDUCATOR: Ms. Prerna Rathod was the Educator this Week. She shared her views on

'Happiness'. She shared that happiness is used for describing mental and emotional state of a person. It is also used in context of life satisfaction, and it's well being. Our happiness is largely related to the people we love and adore, i.e., family,  friends, etc. Happiness is evaluated on the basis of "How happy you are with your life as a whole?"

Happiness might have different meanings for different people, i.e., happiness might vary from person to person.
For example some people get happy by small things that are done by their near and dear ones. While the others seek happiness in materialistic things like gifts, surprises etc. For a child it is seeing their parents happy,
for a teacher, it is seeing their students succeeding. Similarly for parents, it's just the happiness and well being of their child.
But the most important thing is; Nobody can make you happy until you are happy with yourself first. So be happy and make others happy too. She quoted "The true secret of happiness lies in genuinely taking interest in all small and big details of everyday life.”

NEWS & EVENTS
Monday,9th March: School Exams and Board Exams have been in process.

School will remain closed till 30th March, so we will be back with more news and views when the school reopens.