Independence Day Special
15 Aug : Like every year the school celebrated its 67th Independence Day.
The program started with the hoisting of the flag by The Principal. The students participated in a the Parade on the ground. This was followed by a short program. 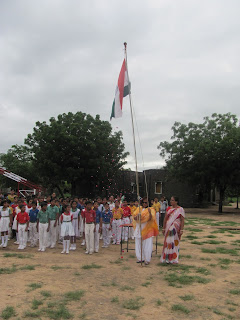 First Vishal Singh of Class X gave a speech on this day and then Mimansha Kunwar of Class IX also gave a speech. We had Inter-house Patriotic Song Competition in which all the four houses participated.

Our Training & Development Manager Mr. Atul Bhatt and Principal Ms Parineeta Ranpal addressed the gathering. The results of the competitions were announced. Blue House stood first in both March Past and Patriotic Song competition. The program ended with the distribution of sweets to one and all present there.

Point of View
Education System in India
Our system has become more a business model. Though it may not be true for all the institutions but majority of private institution are promoting a type of education. They are focusing more on their pockets rather than the students. As we all know that as child enters grade 11th and takes up Science as the preferred stream, then the pressure on him / her starts mounting up. Parents get extra caution regarding their child’s education and they hunt for the best coaching centres to supplement the studies going on in school. This is done, as every parent carry a vision of seeing their child in the best engineering or medical college, with best coaching centres  because they think that without coaching centres their child’s future is in dark which is not true at all. As in earlier years, when there were no coaching centres but there were still students becoming engineers, doctors etc. and they were good enough. As many of the coaching centres are not even having qualified teachers also. The system of Indian Higher Education system is not paying much attention towards fundamental research which is more important for countries development. These institutes are just degree producing mills as they only produce a graduate rather producing an intellectual. Our system of education is such that we just look at the marks secured in the exams but do not encourage our students to think independently and to be innovative. In many institutes like engineering colleges the fees is sky high, which is not affordable by the poor students who are having the ability to gain something in their life.
So the government should ban all such institutes and should make a regulatory plan so the jobs are only provided to deserving students. - Prachi Agarwal (Class XI)
Eve-Teasing
We are living in the 21st century and we call it a century of women or women age. When we are talking about women’s empowerment there exist many factors that try to suppress their freedom. Eve teasing is one of the biggest social problems it’s a type of mental harassment. Eve teasing signifies eve [women] tempts or provokes males for vulgar comments and behaviour. Eve teasing is embarrassing and exploitative behaviour towards women which shows the aggressive forms of expressions. The expressions being socially ill-mannered and unacceptable which hurt the feelings and sentiments of a woman. India may be was or is a golden bird but only in books, lets open the door of reality. Well India is in its dark ages. In fact dark ages were much better than this age, at least they were not shameful and greedy unlike today. The situation of women in India is not at all in any way BETTER.

A look at a newspaper shows you so many incidents against women. A large percentage of women have faced and are facing this problem everyday whether it is a public transport, public places, shopping malls, multiplexes, everywhere women finds themselves vulnerable to the threat of eve teasing. A lewd stare, a sly whistle, a lingering look at a vulnerable time, passing vulgar comments, cheap gestures, and bikes flying close with hands stretched to grope you, all these are the examples of eve teasing. The ways an Eve Teaser can harass a women is surly endless. This is the harsh reality of India. Eve teasing is a complex problem and it requires more attention than what it has actually got. The severe impact of eve teasing is taking away the lives of many young girls in India. Eve teasing in India has to do with women empowerment and girls education. What’s the point of educating if people are not even willing to respect women? The traditional mindset often blames the eve teasing incident on women that they provoke males by wearing scanty clothes even if females wear modern dresses, it does not give men license to harass women. The answer lies in changing the mindset and inculcating morals and values in our education system. The future is waiting to be made better, all we have to do is to refuse to shut our eyes when we witness an incident of eve teasing.        - Sharddha Kansara (Class XI)

The present world, in which we live, is what it is because of certain systems – social, political, economic, religious and others – all these woven together into a complex structure, called society. These systems are built on certain attitudes and values which various nations, communities or groups of people have acquired over a period of time. These attitudes are based on the ideas, ideologies or beliefs which people have acquired, over a period of time, from others or have learnt by first hand experience.
Thus, if we want to build a better world, there is no way to it except through attitudinal change or shift and which cannot take place unless certain age-old beliefs which people have acquired over a period of time and which are working  as the matrix for their attitudes, relationship and behaviour are changed. People have to be given a better ideal which inspires them to have higher values and nobler behaviour. The present age of turmoil is because our society has no such ideal which should give it momentum for better relationship and behaviour. Therefore the improvement in the self, the betterment of our relationships and the spirit of service of others which are sought to be brought are only parts of the Attitudinal Change, which is our main object. In order to bring about Attitudinal Change, we have to give to the society a new convincing and inspiring ideal and also the ideology necessary to achieve that goals and ideal.

Family is the unit of the society, the micro world, the first school, where everyone gets educated. So, in order to bring about a Better World, let us inspire people to make a better family. There is no real love among family members and so there is no real love in man’s relationships with others. A man who is dissatisfied at home and finds tension there would spread dissatisfaction and tension outside his home into the wide world. Parents do not give love to their children and the children do not give respect to their parents and elders. So, let man first improve his family relationships. “Charity begins from home”. This improvement in relationships and change in behaviour and attitudes is brought about by education. It is education that gives the concept of the world as a family.                     - Mr. Harish Agarwal