Weather
Severe winters are here to stay. With North India reeling under cold wave Bali is facing spate of winds and cloudy days. Gusty draft from N blew at 13/26 km/hr. Students were seen clinging to their sweaters and prefered to remain in the closed class rooms. Sky was seen covered with cumulus clouds and weak sunlight. The School has registered maximum temperature at 18°C and minimum temperature at 11°C, dipping to its lowest in the night at 6°C. Humidity is now 18%.

Service
Saturday, 20th December 2014: Escorted by Mr. Surendra Singh, Ms. Ritu Rajpurohit, Class XI went to distribute clothes to the tribal people of Bijapur. The whole school contributed enthusiastically. They returned heavy hearted but relieved that they could be of help in a small way to the needy as they saw a pitiful sight with naked tribal children shivering in the cold. Our thanks to Ms. Neha Vijaywargi (Mr. and Mrs. Vijawargi’s daughter) to volunteer to escort students for this social cause.
Thank You Students for this social service. 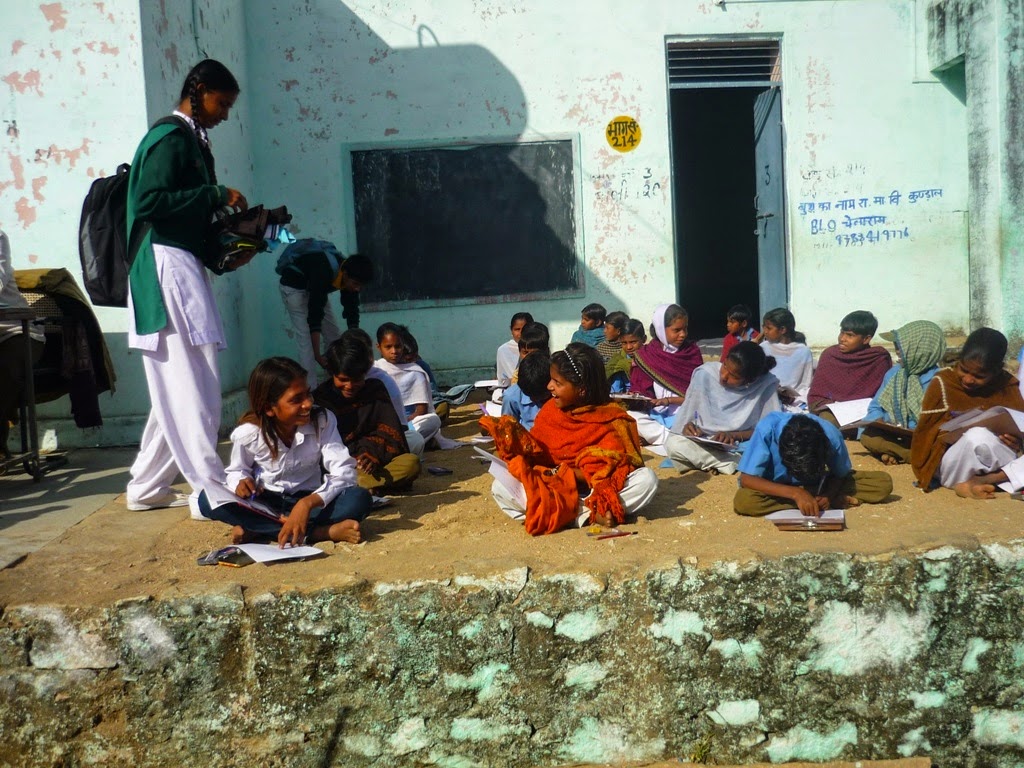 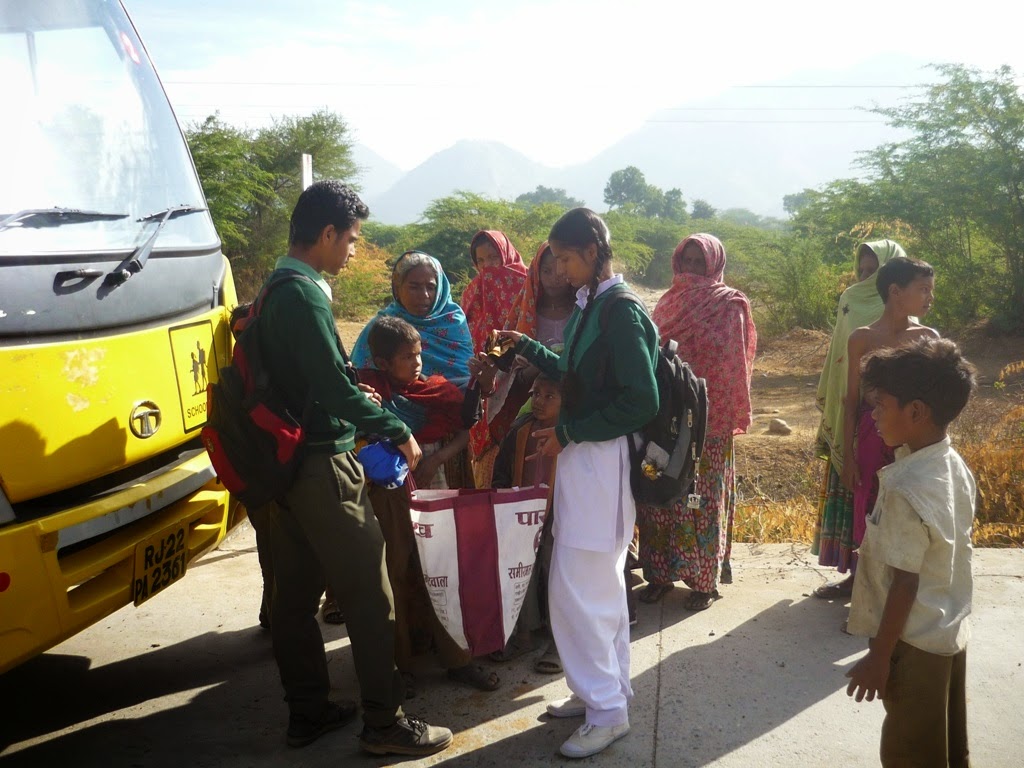 Ed: How did you come to know about The Fabindia School?
P.R: I had heard about the school as I am a local from Bali. I was called to teach mathematics as there was a vacancy for mathematics teacher.

Ed: How did you find the school at that time?
P.R: O, there were less number of students and there were fewer facilities compared to present. There were less computers, very less number of co-curricular activities were held. Discipline and punctuality among the teachers and the students was not so strictly followed. Tar road had not been constructed which leads to the school today. At that time there was no separate toilet for the girls also as they exist now.

Ed: When was the separate toilet constructed for girls?
P.R: They were constructed by Puntney Group in 2008.

Ed: What were the sports facilities in the School during that time?
P.R: Not so good though students got opportunities to play then also!

Ed: What changes would you like to see in the School.
P.R: The school needs to be disciplined. We need to have more qualified teachers. I know it is difficult to get in rural areas but then we are here to give good education! I think there should be an auditorium, sport complex, teachers should train the students in skills.

Kushagra Singh, Santosh Paliwal/XI Science
Skills
Saturday, 20th December: For the first time two girls Shraddha Kansara/XII and Khushboo Punmiya/XII participated in the Inter School Debate Competition hosted by K. S. Lodha School, Falna. The topic of the competition was “Should Social Networking Sites be banned”. Thirteen CBSE. Schools from Jodhpur, Udaipur and schools from the surrounding areas participated in the competition. The winning teams were from Jodhpur and Udaipur. Girls felt recharged on returning as though they hadn’t won but it was a rewarding experience to know how a debate should be spoken!

Card making activity was carried out in many senior classes. The students made beautiful cards for Christmas and New Year for their teachers.

From our school we both participated and the topic was Social Networking Sites Must Be Banned. Keeping in mind how social networking sites have consumed today’s youths’ energy I think it was a most fought upon topic!

The teams came from faraway places like Jodhpur, Udaipur and surrounding areas of Falna. In all there were 13 participating schools to debate upon this topic. The competition was very tough and all the competitors were commendable as they performed with very relevant points for the house to decide upon.

There was a lot of drama and action in everyone’s delivery! Tone and expression were so clear that it seemed they owned certain sites themselves! There were no questions and queries during the delivery. We simply had to present our points and convince the audience and the judges.  It was our first time to go for an Inter School Debate and we were the luckiest ones to represent our school.
In all it was a great experience of our school life! We learnt many new things like how to write one’s own debate than to use someone else’s points; how to use a tone to convince the audience; how to look into each audience’s eye and talk to judges as if to say it mattered to you! This experience will help us in our future.

We tried our best and we were satisfied with the result as winning is not the part of every competition, participating is also a big thing and participating in front of a large crowd is not everyone’s CUP OF TEA. All the participants were appreciated by a certificate, set of Flair pens along with a memento for school and the winners were awarded with cash prize. Team effort of two schools was appreciated by two marvelous looking trophies. Overall the experience was great and unforgettable and we thank our school for giving us such a wonderful opportunity.

Sports
Monday, 15th December: For Theme of the Month for December, “Sport’s and Health”, few students spoke in the Assembly.

Mimansha Kunwar/X A: reflected on “Smoke Is Injurious to Health”
Dipendra Kunwar/X B: spoke about “Importance of Health”
Khushboo Rajpurohit/X B: addressed the Assembly on “Importance of Sports”

Saturday, 20th December: Saturday PT was taken up by Mr. Surendra Singh organized. Kushagra Singh/XI and Vaishali Rao/XI led the School.
Studies
Monday, 15th December to Saturday 20th December: Evaluation 4 and 5 started for Class I to V. A number of activities, projects and creative writing were carried out to evaluate students. For the whole week FA III was conducted for Class VI to X. Pre-primary Classes finished their Terminals Exams.

Tuesday, 16th December: Tuesday was a normal day. Nothing special happened but the only thing which was a cause of concern was the severe cold. Mr. Suresh Negi gave an activity to the students of class V B. Mr. Ajay Vijaywargi decided to have the lunch of all students of class X B together.

Thursday, 18th December: Another round of questioning took place on the monthly theme “Health and Sports”. Manvendra Sonigara/IX asked questions on sports.

Saturday, 20th December: Global Science Olympiad was organized in the school. Sixteen students of Class IX, VIII and IV participated in the Olympiad.

The School will close for Winter Vacations from 24th December to 3rd January, 2015. We will be back with more news and views on 12th January 2015, till

The School Weekly wishes its readers A Merry Christmas and A Very Happy New Year. Keep smiling and keep healthy!