Weather
Torrential rains, gusty winds and cloudy skies were order of the weekend gone by. Bali was target of the worst rain for a night also. For the first four days the weather was sunny and hot during the daytime. On Friday cold winds started blowing from SSW at 28/65 km/hr. Sky was covered with nimbus and cumulus clouds on Friday and Saturday. Showers have increased cold. Maximum temperature recorded was at 26°C and Minimum was at 17°C. Humidity stood at 36%.

Our students were made to stay with the boys in the boarding houses so that they may experience hostel life. Three students stayed in Nimaji House, three in Dataji House and two in Kanerkhed House. Ms. Usha Pawar and Vaishali Rao stayed in Jankoji House Guest Room (where Ms. Deepika Tandon- our Principal was the Housemaster). These houses were in the Junior Campus. For breakfast, lunch and dinner we had to go to the Senior Campus as the Dining Hall was there.

We visited the entire school campus and attended the School on 19th February. Students of Class VIII and VII were sent to attend four lessons after the Assembly. Ms. Usha Pawar was escorted by Ms. Jaiamala Patil to the Paper Mache Department. We learned to make many things out of paper pulp. We made pen holders, monuments, cards etc,. Every day, after four lessons, rest of the students also joined us. We visited the Tie & Dye Department, Wood Work Department and Stone Carving Department; learnt to tie and dye handkerchiefs with beautiful designs. We carved a heart out of white marble and the name of our Principal.

We appreciate the work that Scindians do. The opportunity that we got helped us to get  exposure and polish our talent better. In the evening at 4:00 P.M., we played sports in the school's regular games time. We also attended a lot of classroom activities. We learnt to make many decorative things. The students of The Scindia School were very friendly and cooperative. It was a wonderful experience. We are proud to say that we are two 'Indians'- "Fabindians” and “Scindians”.

Thank you Mr. Samik Ghosh for inviting us to your School. Thanks to Ms. Rakhi Sharma and Ms. Gurusharan Kaur who made arrangements to make our stay comfortable at school. Thanks to Ms. Jaimala Patil for being such a great help in the Art & Craft Dept. We would also like to thank our Principal who gave us this opportunity and we would like to thank all those who worked behind the curtain to make this possible as a very rich experience. We also visited the Gwalior Fort and went to shop in the city. We were applauded and appreciated greatly. This learning experience has made us more creative and smart.
Khushagra Singh/XI/GH
Vaishali Rao/XI/GH

STUDY
Monday, 23rd February: Class X and XII were given preparatory leave for board exams. In the Assembly Science Week was celebrated. Then for the whole week, a Special Assembly was held every day for students to speak about Science. Mr. Byju Joseph/HOD Science Dept. announced the Science Week open.

Science Week Day I
Muskan Rathod/VIII/TH, Kirti Malviya/VIII/ DH, Kinjal Rao/VII/DH and Deepika  Soni/VIII/ RH spoke about Science, its importance and its facts.
Science Week Day II
Divanshu  Bhati/ IX/ GH and Jaswant  Singh/IX/ Raman House: Spoke about the importance of Science and its facts
Kapil Bansal/IX/ Dhyanchand House:  Spoke about famous scientists.
Science Week Day III
Divya Chundawat/VIIIB/ DH:  Spoke on Jagdish Chandra Bose and his contributions towards science
Muskan Rathod/VIIIB/ TH: Shared certain facts on metals, space and gases
Chetan Vaishnav/VIIA/ DH:  Spoke about Albert Einstein and his ways of figuring out things by experimenting. How he believed in understanding than mugging up.
Avinash Sen/VIIA/ RH: Spoke about Alexander Graham Bell whose father, grandfather, and brother had been associated with work on elocution and speech. Both his mother and wife were deaf. This deeply affected his research on hearing and speech. His experiment with hearing devices eventually got him to be awarded as the first U.S PATENT for the telephone in 1876.
Rakesh Suthar/VIIA/ Teresa House: Spoke about A.P.J. Abdul Kalam’s contribution to our country as a scientist.His work on the development of ballistic missile and launch vehicle technology
Jitendra Chipa/VII A/TH: Spoke about Sir. C.V. Raman. whose ground breaking work in the field of light scattering earned him the Nobel Prize in 1930. He discovered that, when light traverses a transparent material, some of the deflected light changes in wavelength. This phenomenon is now called Raman Scattering. In 1954, he was honoured with the highest civilian award in India, the Bharat Ratna.

Science Week Day IV
Archana Koratkar/VB/GH Explained concepts on Electricity
Yashvi Choudhary/VB/ DH: Spoke on discovery of Steam engine,
Kapil Bansal/IX-A/ DH: Spoke on Issac Newton an English physicist and mathematician who is widely recognised as one of the most influential scientists of all time and as a key figure in the scientific revolution. Newton made seminal contributions to optics. Newton's Principia formulated the laws of motion and universal gravitation, which dominated scientists' view of the physical universe for the next three centuries
Sandesh Singh/IX-A/ DH: Explained about Mercury.  It is commonly known as quicksilver and was formerly named hydrargyrum. Mercury is the only metallic element that is liquid at standard conditions for temperature and pressure; the only other element that is liquid under these conditions is bromime, though metals such as caesium, gallium and rubidium melt just above room temperature. Mercury is used in thermometers barometers etc,.
Shashank Singh/IX-A/ DH: Showed an experiment of a candle in which he showed that a candle is lit on both sides. How air moves from high pressure to low pressure and balances the candle.

Aditya Pratap Singh/IXA/GH: Showed experiment of on floating the eggs in salt water and normal mineral water. A bottle was taken in which a paper was burnt and put in the bottle. Due to the pressure the mouth of the bottle expanded and a boiled egg was able to slip inside the bottle.
Science Week Day V
Anshul Choudhary/ VIII/ RH: Spoke about green house gases
Sandesh Singh/IX/ DH: Spoke on the planet Venus and its relation to other planets.

Radhika Singh/IX/ GH and Khushi Rao/IX/GH of Class IX were the anchors.
Speech was presented by Mamta Chouhan/XI/GH on Swine Flu in India and how to keep one protected from its claws.
Kushagra Singh/XI/TH: Explained mechanism of breathing.
Santosh Paliwal/XI/G: Gave general information on an atom and its power.
Students demonstrated live experiments on stage for Class VI to XI to watch and learn things by doing.
Anirudh Singh/ VII/ GH and Nitesh Choudhary/ VII B/ RH: Battery made out of lemon, potato zinc plate and copper plate. When Citric Acid was poured on this battery, a chemical reaction took place which produced energy.
Kasak Choudhary/ IV B/ Gandhi House: Showed three states of   matter by role playing it.
Divanshu Bhati/IX/ GH and Sandesh Singh/ IX A/DH: Production of carbondioxide.
Rohit Vaishnav/ VI/DH and Jayesh Suthar/VI A/TH: Showed some common apparatus which we use in labs.
Rahul Soni/IX/ DH and Manvendar Singh/ IX/ RH: Production of fire on hand by using dish wash gel, chemical and water. When the mixture was taken on the palm and a matchstick was lit at that time fire was produced.
Aditya Singh IX/ GH and Diyanshu Yadav/ IX/ DH: Floating and sinking of eggs. Three beakers were taken and in one beaker tap water was filled. In another beaker some salt was dissolved. In the third beaker a salty solution was made. It was seen that the egg floated in a salty solution, while the egg sank in the tap water.
Shashank Singh/IX/ DH, Aditya Singh IX/GH, Devyanshu Yadav/IX A/DH: Working of rocket.
Jaswant Singh/IX/RH and Nikhil Soni/ IX/TH conducted a Science quiz.
Ms.Raj Ranawat spoke a few words to explain how science helps in developing understanding things by doing. She also spoke on Raman Effect. 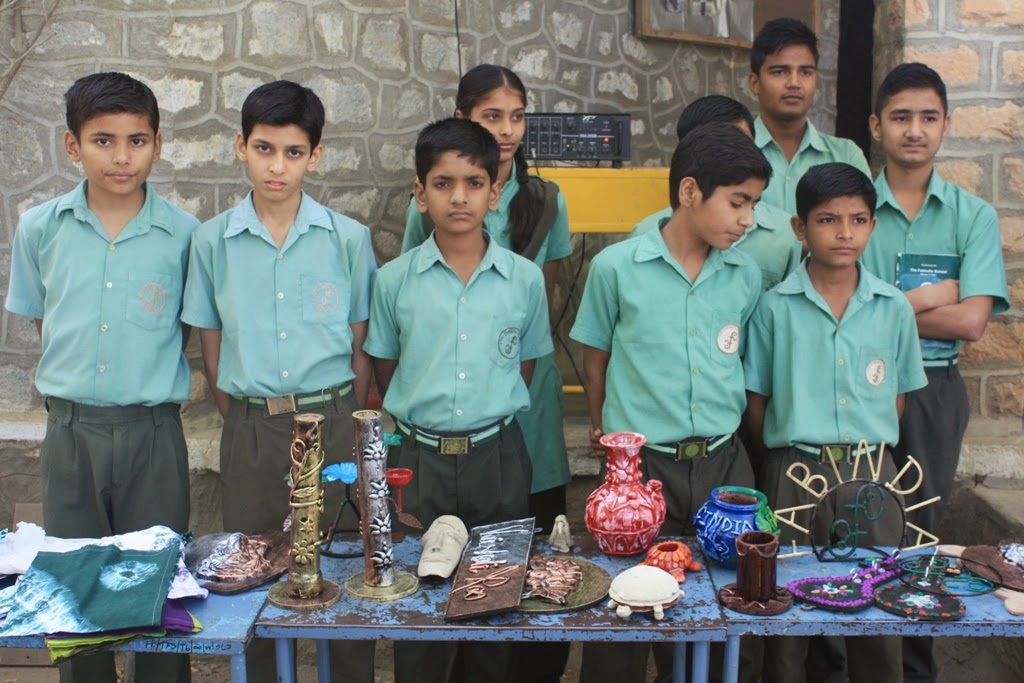 Khushagra Singh/XI/ TH, Vaishali Rao/XI/GH, Suryaveer Singh/VIII/DH, Anshul Choudhary/VIII/RH shared their experience in the Assembly of learning Metal Work, Stone Carving, Wood Work, Paper Mache; of how they had made new friends in a school; of their own growth after this visit. They all felt that it was one thing that had changed their view of their own world.
Dhruv Ojha/VIIA/ RH, Harshvardhan Singh/VIIA/ DH, Mateen Tak/VIIA RH, Ajaypal Meena/VIIA/ GH and Dipendra Singh/VIIA/ RH all spoke of their rewarding experiences at The Scindia School. They looked forlorn but vibrant after their return. Each student felt he had gained a lot in a short period of time. Two boys even wished to go and study there!
Thank you Jackson Wagner - our very special Physics Teacher!
Friday, 27th February: A Special Assembly was held to bid farewell to Jackson Wagner, who had stayed for five months in the school as a volunteer teacher. In the Assembly students of Class XI and IX A thanked Jackson for teaching them Physics. Mr. Babulal Deora, Mr. Byju Joseph, Ms. Bharti Rao and the Principal Ms. Deepika Tandon thanked Jackson Wagner for his contribution in teaching Physics and Science, while his stay in the school. A small party was organised by the staff club. A small gift was presented to Jackson from the Art & Craft Dept. and Staff Club as a token of appreciation for his work.