Encouragement means the action of giving someone support, confidence, or hope. A teacher must encourage his or her students . Encouragement gives power to achieve goals of our life . A teacher must have positive attitude and always encourage his or her students . To be encouraging , you must believe in two things to be true . One , the person is not trying hard enough , which is probably not something the person wants to hear , and second , if the person tries , he or she can do great things , which is good . There are high spots in all of our lives , and most of them have come about through encouragement from someone else . Encouragement makes people better. It means to decide to make others problem, your problem and it builds a hope in people . The key to encourage is to deliver the bad news in such a way that doesn't force the person to dwell on inadequacies . Encouragement requires that we tell people they aren't realizing their potential and then challenge them to achieve their goals with a specific plan . Encouragement prevents us from giving up . Giving up is the worst injustice you can do to yourself . Words of encouragement make people feel better , and relate to the capabilities . You can get your next ounce of energy from positive words pushing you to move forward .- Krithika Rao/ Educator 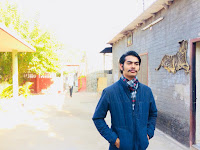 SM: I left school in 2006 when my parents shifted from Bali to Koselav.
ED: Who was your favourite teacher?
SM: My favourite teacher was Mrs. Bharti Rao.
ED: Who were your batch mates?
SM: Bajrang, Chandu, Deepak, Vijaylakshmi.
ED: Did you participate in any activities?
SM: I have participated in debate competition and in all sports activities.
ED: What are your qualifications?
SM: I am doing BA (H) in Sanskrit from Delhi University..
ED: What message would you like to give to the students?
SM: Students should work hard and study well to get success. 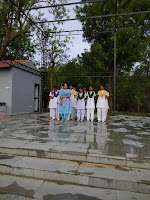 EDUCATOR THIS WEEK: Neelam Malviya/Educator was selected as the Educator This Week for showcasing excellence in her subject in 12th Board Exams. She addressed the Assembly and told the students that there is no shortcut to success. Each student needs to work hard if he wants to achieve success in life. 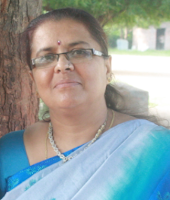 Staff had a PLP Session on 3rd and 4th July. On 4th July Educators had a PLP Session with Chairman Mr. Sandeep Dutt. Discussions were done on strategies of being 'Happy Teachers'. Learning Forward Saturday Plan was discussed. Minutes of the last meeting were read out.

Staff wished Mrs Sharmila Vijayvargi and Mrs. Bharti Rao a 'Happy Birthday' who had their birthdays in the month of June. May God bless them and have a bright future.

Mr. Chandan Singh Rajpurohit F/O: Balwant, Ishika Rajpurohit was selected as the Parent This Week. He addressed the Assembly and motivated the students by telling them to work hard, concentrate on their studies and be good citizens.

Parikshit Singh/ X/TH was selected as the Student this Week for achieving I Position in X Board. We are proud of him. Congratulations to him on this success. He addressed the Assembly and motivated the students by telling them the strategies to success. He said that hard work and concentration leads to success

Monday, 2nd July: Welcome back Readers! The School reopened on 2nd July'18. Campus once again buzzed with activity. So, excited students were seen exchanging information about their visits and what they did during their vacations. All in all every student looked fresh and cheerful, ready for a new term. Ms. Rajeshree Shihag, Principal and the Teachers welcomed the students back to school, asked them to submit their Home Work. Students appeared for UT I from the very first day. 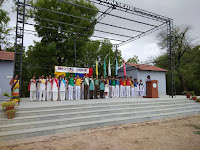 Friday, 6thJuly: The Fabindia School held its fourth prestigious Investiture Ceremony on 6th July  with great enthusiasm and pride. The Investiture Ceremony marked a significant beginning of the new Academic Session 2018-19. It was a solemn occasion where the young students were all prepared to don the mantle of leadership and discharge the responsibilities entrusted to them by the school. The Ceremony began at 9.15 AM. Mr. Sandeep Dutt, Chairman BAT & School ED had kindly consented to honour us as the Chief Guest for the occasion. He was escorted by Principal Ms. Rajeshree Shihag, Manmanvender and Muskan Rathod, to the OAT where the ceremony was to be held. After the Assembly the Principal declared the inception of the Investiture Ceremony. After it the Oath Ceremony of the Student Council took place. Their names were announced by the Principal. Each student marched smartly to the stage with her/his respective School/House Flag to take the Oath. The Students Council willingly and positively promised to do their best to represent  the school. Before the Oath Ceremony the Chief Guest presented the Student’s Council with sashes and badges. The Secretary and Joint Secretary of the Clubs and Societies were also presented with badges. The Investiture Ceremony concluded with lot of hope and aspirations for our future leaders. It was a memorable occasion for the young leaders as they looked forward to a new and enriching Academic Session. The event was a great success with the participation of all students, teachers and admin staff; without whom it would have not been so impactful.
Heartiest Congratulations to the Student Council and Office Bearers for the session 2018-19
After the Investiture Ceremony students went about their regular classes. Manmanvender Singh is appointed as the Head Boy and Muskan Rathod as the Head Girl along with other members of the Student Council.

Saturday, 7th July: The 25th Annual Prize Distribution 2017-2018 ceremony was an occasion to acclaim the achievements of the Fabindians who had attained excellence in academic through their dedicated efforts and perseverance. Felicitating the achievers not only motivates them to set new benchmarks for themselves, but also spurs on their peers to aim for similar heights. School Executive Mr. Sandeep Dutt was invited to do the honour as the Chief Guest. He was gracious enough to give away the awards for the evening. Some Parents graced the occasion by their presence for the ceremony.

Prize Distribution Day started with the Welcome Speech by the newly appointed Head Girl Muskan Rathod. The show started with the Welcome Song.  Muskan Rathod welcomed the Chief Guest, which was followed by the Cultural Show which included two Folk Dances and two songs sung by the Musical Choir and Music Teacher Mr. Ravi Trivedi. Head Boy Manmenvender Singh gave Vote of Thanks. Principal Mrs. Rajeshree Shihag spoke a few words to the gathering. School Executive Director Mr. Sandeep Dutt motivated the students with his speech. The program ended with the National Anthem.
Winners and achievers excitedly mounted the stage to take their trophies and certificates. Excitement spread among students when the announcement for the  House Trophies was done.
Winners of the House Trophies of Excellence for the year 2017-18
Loomis Chaffee Trophy of Excellence in Skill: Raman House


The Bissell Trophy of Excellence in Sport: Teresa House


The Surana Trophy of Excellence in Study: Teresa House


Congratulations to all the winners! 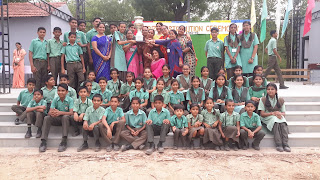