Republic Day Special
Weather
For the whole week Bali experienced cold winds blowing from South East. The sky was clear with bright sunshine. Due to the chill in the air, temperatures lowered to 8°C and Maximum at 21°C; Humidity was 46%; SE winds blew at 11 km/hr.

Skills
Monday, 26th January: 66th Republic Day celebrations took place. One of the founder teacher Mr. Arif Samma was invited to be the Chief Guest for the occasion.  He was introduced to the Faculty at the commencement of the programme, wherein he hoisted the flag. After the National Anthem, he inspected the parade. Then the whole school marched, followed by a P.T. Display. The marchers were inspected by the Chief Guest, Principal and Mr. Narayan Singh (a retired PTI). After the P.T. Display the Chief Guest addressed the School which was followed by Vote of Thanks by Mr. Byju Joseph. Once the whole function got over sweets were distributed among the students.

Class XI and XII students represented our school in Inter-School Parade competition and bagged 2nd position out of fourteen schools at the Government Sen. Sec. School, Bali.
Kushagra Singh/XI was awarded as the best group leader in the March Past.

Pooja Dutta/X, Silvi Mehta/X, Apoorva Mathur/X, Aditi Singh/X, Lavina Singh/X and Vaishali Rao/XI participated in Inter-School Dance Competition at the Republic Day celebrations though our school did their best but alas we could not get any position. 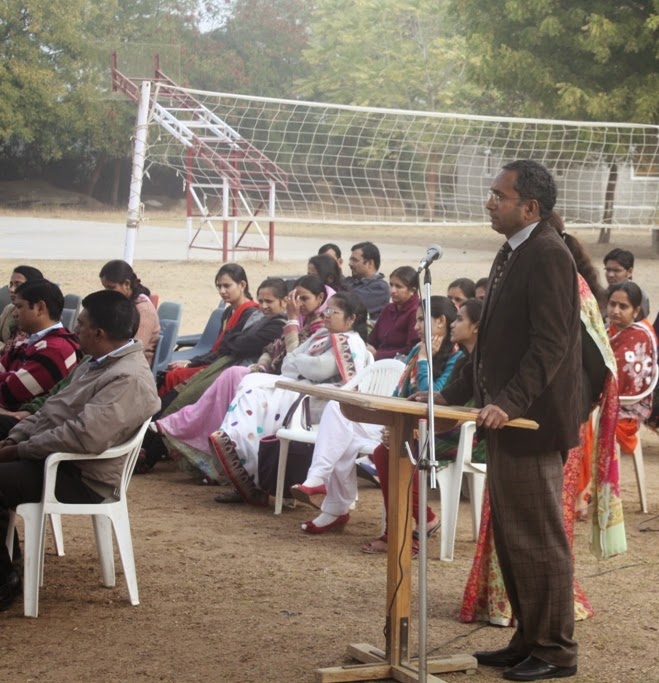 It gives me immense pleasure in greeting you for the Republic Day of our beloved country. 26th January is celebrated in India as Republic Day. Another important day is 15th August and we call it Independence Day. India achieved Independence after a hard fought freedom struggle in which thousands of people went to jail for many years. Hundreds of people gave their lives, many of them were put in British prison for many years and many of them were tortured by the British Police. We got independence on 15th August; that is why we call 26th January, Republic Day.

Now let me put a simple question: ‘What is the meaning of Republic?’

I have been teaching Social Science from the last 17-18 years and I will tell you that many of our brilliant students, even my own students, are unable to tell me what as to what is the meaning of ‘Republic’. The word’ Republic’ means “A country where the head of the nation is not hereditary - is elected. This is the meaning of the word ‘Republic’.

26th January 1950 - we adopted India’s Constitution and a new era began; a new chapter began in India’s destiny and we followed our own Constitution. We embarked upon the path of building our nation. Indian Constitution was the hard work of the constituent assembly in which the best brains of India, the leading lights of India, some of the top freedom fighters, legal experts drafted this Constitution and that took more than two years to be formed. It is one of the lengthiest written Constitution of the world and its worth the hard work! Its importance has been proved as we see that by following the Indian Constitution we have upheld the democratic traditions. We have nurtured it further. Today, India stands very tall, in the committee of country’s nation that today American President Barack Obama is in India. India and China are the two most emerging economic strengths in the world and I am very hopeful that we will surpass China.

We have made tremendous progress. But at the sometime we need to do a lot of things in basing the gap between the very rich and the very poor. I was reading an article few days back that 8% families in the world control the world’s economy and the same case is in India. Few very rich people control and have a lot of say in India also. When I go to Chandigarh, Delhi, Bombay and big cities, I see so much of progress, development, big moulds, hi-fi markets, clean roads and whenever I come back to my hometown Bali or whenever I travel in rural areas there is a complete gap! But let us hope that India, after achieving more economical progress, will definitely brace this gap, will work for the betterment of the country.

Now few words about The Fabindia School- Just like in last 65 years or since1947 India has progressed in the same manner I feel so happy and satisfied to see that the school which we started with eleven students in 1992 has progressed this further.

I have a very sharp memory and I recall lot of things which went in making this school. Mr. William Bissell never treated us as his employees. We were like his team members, comrades or friends. Long discussions used to go on. It was very difficult to get students in the beginning, but later after just one year of hard work, suddenly not only from Bali but from nearby areas parents started sending their kids to our school happily with high expectations Fabindia stores are very famous in whichever  cities, in fact they are available in Dubai and world over for then very high quality fabric clothes. I hope in future this school also progresses in such a manner, it has progressed but we much work further to come to the expectations from parents.

In this changing world the expectations of parents, the expectations from teachers, from educators also change. They demand new ideas and inputs. This is what I feel that the school has a task. I am so thankful to Ma’am Deepika. I met her four five days back as a courtesy visit to my old school. I found her as a very compassionate, caring and a very kind, at the same time a very thorough professional person with a vast experience in various schools and I am very happy that the school is in very capable hands. She will take this school to further glory.

In the end again, I hope and I seek all my regards, blessings for the beloved country of ours for Bali and in Bali for our school all the students and faculty members Lastly, I will conclude with a very famous couplet. Some of you must of have heard Muhammad Iqbal’s poetry:

I will translate it into English:
Egyptian Civilizations and Roman Civilizations have all vanquished from this world, but even today we Indians are here,
There is something in this soil that helped us (India Culture to a large extent)  to survive from innumerable enemies.

Articles on Republic Day
Before starting to understand the importance of the Republic Day we need to understand the meaning of 'Republic'. We can simply understand it that it is a nation where the head is an elected representative. India fully fits in this definition.
In 1930, India had declared its independence on 26th January. Since then, it has come to be a very important day that is observed in India. When India got its real independence in 1947, it felt a need for a constitution. It took 2 years, 11 months and 18 days to make the constitution for the Constituent Assembly of India. The constitution was ready on 26th November 1949 but to keep 26th January as an important day, the Indian government regulated the constitution on 26th January 1950. It is very important to note that India is the largest democracy and it has been 65 successful years of republic India.
Aditya Kansara/X B

We Indians are very proud to celebrate Republic day. Don’t think it just a public holiday. Hear me, I have just few things to say. Reading this you may decide your own way.

I salute the leaders who had fought Azaad, Bhagat singh, Rajguru and Bose.
Do not forget the current protection given by the brave BSF collection.
The day we called our country Republic, that time many lives were sacrificed by the public.
When I hear the media ‘flash news’ and end up in tear
Will there be more news of bomb blasts?
I hear horrible living under terrorism and war.
To this what the great Mahatma dreamt for?
In, 1947 we got our freedom.
But yet India is fighting for wisdom.
Let us not watch the cricketers’ zeroes
Stay away from the corruption bureaus.
Our great jawans have nothing but let us bow our heads for those real life heroes
Shall we take this oath? By girls and boys both India will automatically change
Under India the biggest power will also be drained.
We, youth, let’s speak the truth Satyamev Jayate.
Happy Republic Day

Sports
Saturday, 31st January: Inter House Girls Badminton Tournament was held. Quarter Finals and Semi finals of both Singles and Doubles were played on the same day. In singles match Vaishali Rao/XI of Gandhi House and Blessy Maria/X of Dhyan Chand House has reached the finals. In Doubles Santosh Paliwal/XI and Radhika Singh/IX of Gandhi House and Khushboo Rajpurohit/XI and Divya Solanki/X of Teresa have reached the finals.
Finals will be held on Saturday, 7th February. 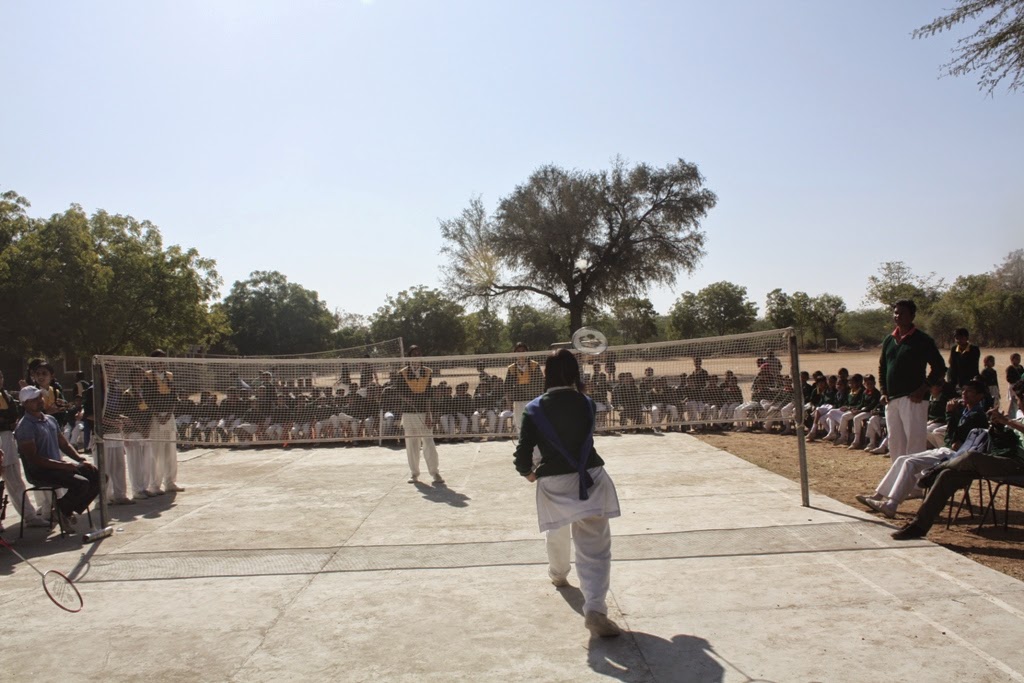 Studies
Friday, 30th January: The School observed Martyrs’ Day. A Special Assembly was held. Ms. Punita Chouhan spoke a few words and told the students why we celebrate this day as Martyrs’ Day. Two minutes silence was observed at 11.00 am in the school.