WEATHER
Day by day weather is becoming increasingly hot. Temperature has increased by 2°C. The sun is shining bright all through the day. It has become difficult to go out during the afternoons. Students prefer to play indoor games due to the hot weather. Highest temperature recorded was at 41°C and lowest at 27°C. Humidity has dropped to 13% and the wind blew at 14km/hr. Sandstorm is frequent. Seeing the hot weather, school timings have been changed to 7.30AM to 12.30 PM from Monday.
SKILL
Importance of Sports in Student’s life
Games and Sports are an integral part of a student’s life. A student should study hard to be successful in competitive examinations. But, he should also play games and sports to enjoy the health and vigor of life. Along with bookish learning, a student should spend his time on games and sports. There are many people who give importance only to bookish knowledge. Indeed, there is often no provision for games at all.
Nowadays education of boys and girls is no longer confined to the lecture-theatres alone. Monotony of lectures has been very much minimized by out-door work and participation in games and sports and various athletic feats, which generate healthy competitive spirit and interest in life among students.
There are many benefits of games and sports in education. Outdoor games such as football, cricket, badminton, tennis, etc. have many benefits. The participation in any one of them is not a fruitless or frivolous pursuit. They may not ensure any immediate gain. They may tell upon the health for the time being and may also affect education temporarily. But the outdoor games gradually build up a healthy body and make the mind energetic.
We are very lucky that our school gives importance to both Academics and Sports. Our School has also tied up with Sportify to provide us more Sports facilities. We have a regular Sports Lesson and Sports on Activity Day. Sport Activities and Tournaments are organized now and then. I love Sports and I participate in many activities in School.- Suryaveer Singh/ X/ DH
MATHS QUOTES BY FAMOUS MATHEMATICIAN
Math is one of the subject we all study from primary to end of our life .Math was invented very long ago ,though today it is hated by most of the people but its contribution to the human life is wonderful and noticeable. Math is such a wonderful thing that it had not only allowed us to calculate the distance of planet and stars but had also allowed the creature human to travel through to space. Math is part of everybody’s life. Here are some of the quotes given by famous mathematicians.
"There is no permanent place in the world for ugly mathematics……..It may be hard to define mathematical beauty but that is just as true of beauty of any kind, we may not know quite what we mean by a beautiful poem, but that does not prevent us from recognizing one when we read it."-G.H.HARDY
"Mathematics, in general, is fundamentally the science of self-evident things "-FELIX KLEIN
"The essence of mathematics lies in its freedom."-CANTOR.
POLLUTION- A MAJOR PROBLEM
Our environment is contaminated by many ways and by much pollution. Water, an important resource, it is vital for human survival. A basic input for agriculture is used as a cooling agent in industries and it is contaminated by many ways like when people wash their clothes at river, by industrial wastage and air is also important for living, day by day population is increasing as the demand for vehicles is increasing and by extra use of vehicles result in contamination of air and noise pollution and many harmful gases were released, these harmful gases mixed in atmosphere and form clouds result in acid rain and when that flows and mixed with river then the life of aquatic animal becomes difficult so, for shorter distance we have to use cycle to make our environment free of pollution. Due to acid rain, the colour of monument becomes yellowish and by that less tourist come to visit our country and our country India is known as a tourist paradise. -Kreena Rao/ VIII/ DH
SPORT 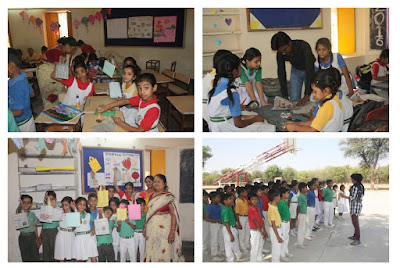 Monday, 18th April: Special Assembly was held on occasion of World’s Hemophilia day. Mr.Tarun Mishra gave an Assembly talk and made the students aware about it by telling about what is hemophilia and why is this day celebrated. Sports Week has started. Mr.Surendra Singh/ HOD Sports spoke on Physical Fitness and its requirement in our daily life.
Bhumika Nagar/X/ RH:  Spoke on the Importance of Sports and Games in our life
Wednesday, 20th April: Continuing the sports week Nikhil Soni /XI/TH spoke on Necessity of Heath and Sports.
Ajaypal Meena / IX/RH: Spoke on Sports the great unity.
Thursday, 21st April: Kinjal Rao /IX/DH: Gave a talk on Value and Importance of Sports.
Diksha Choudhary /VIII/GH: Gave a talk on Benefits of Sports.
Friday, 22nd April: Blessy Maria/XII/DH: Spoke on Leadership through Physical Education.
Yash Soni /XII/ TH: Spoke on Concept of Sports Training.
STUDY 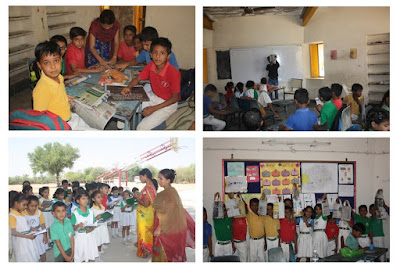 Monday, 18th April-Tuesday, 19th April: Mr. Byju Joseph/ AD and Mr. Ajay Vijaywargi/ AD attended a two days CBSE Workshop at DPS, Jodhpur. They shared their experience and learning with staff during PDP session.
Thursday, 21st April: Intra Class Anuchhed Lekhan Competition was organized for Primary Section. Students work was appreciable and they performed beautifully.
Friday, 22nd April: On occasion of World Earth Day a special assembly was held. Mrs. Prerna Rathod spoke about why this day is celebrated. Students were given message to save earth and stop pollution. School started its first step by saving electricity. They switched off their electrical devices and sat in this heat without fans for three hours.
Saturday, 23rd April: School observed an Activity Day. In the first hour students had their Society and Club meeting. After that the classes attended Art & Craft, Music and Sports Classes. Primary Section students had Paper Bag Activity during Art & Craft Classes. They made beautiful bags out of old newspapers. They enjoyed a lot.
School welcomes Mr. Rakesh Kumar and Mr. Partha Guin as our new Art & Craft teacher. School wishes them a rewarding time with us!
Email ThisBlogThis!Share to TwitterShare to FacebookShare to Pinterest
Newer Post Older Post Home