Mera Bali
Bali is an ancient city. A Jain scroll which Colonel James Todd obtained from a Jain guru in Sanderao gives the earliest description of founding of Bali town. Thirty thousand Jain families abandoned Valabhi and led by their priests found a retreat for them in Marwar, where they erected the towns of Sanderao, Bali and Nadol in 524 AD. It was the heart of the Godwar area in the 11th century. It was also a town where regular horse fair was held to trade the horses. Till today horse races are organized on the occasion of Ganguar Mela. King Sarubali Baldev won the land of Bali in a battle in 1240 AD and he crowned the area his royal capital, naming it Bali after himself. Legends say that the Pandava children used to play childhood games in this area and a water well still exists which was formed by Bhima, one of the Pandavas.
In 1608 AD King Balasingh constructed the Fort of Bali to protect the city and a wall was built around the city edges to protect it from attack. The town planning is based on ancient geometrical, astrological and architectural laws. The marriage of Rana Udai Singh, father of legendary hero Maharana Pratap, was solemnized with the daughter of the Rao of Jalore at Bali. A dispensary was established in this town in March 1896. In 1897, it served 17 in-patients and 4166 out-patients and 318 operations were performed in it. In 1900 there was a plague outbreak in town and the town was evacuated. 1245 deaths occurred during the month of January 1900 as a result of diarrhea, dysentery and pneumonia.
Prior to formation of Rajasthan it was headquarters of a district with same name in erstwhile Jodhpur state. Bali had its own municipality even before independence. It had a middle school in 1932 that was upgraded to high school and in 1946 had more than 200 pupils. In 1960 Bali had three primary schools for boys, one primary school for girls and a high school. The telephone arrived in Bali in 1957, it got electricity in 1961 and piped water connections were given in 1970. A tehsil library was established in the center of Bali in Bawari Jav in 1958. In addition Bali also has a Jain library. In 1992 the first CBSE School The Fabindia School was established
SERVICE

Monday, 2nd May: Students of Class VIII & IX painted the outside wall of Visitor’s Room with the help of their Art & Craft Teacher Mr. Partha Guin & Mr. Rakesh Kumar. Very big thanks to the both students and teachers for their splendid work.
SKILL
International Labour’s Day: Every year International Labour’s Day is celebrated on 1st May. Labourers are the future of the world. They work hard for us. It is sad to say that nowadays labourers condition has become terrible. Due to new technology labourers work has become so less because 10 labourer work is done with the help of one machine only. Their work goes waste for it is not given any importance. They have become poor. They have no money to fill their families stomach. Due to the lack of food many labourers are dying. So Labour Day was celebrated first in US. to remember the achievements of workers. Nowadays it is celebrated all over the globe as International Worker’s Day. -Kreena Rao / VIII / DH
Smile
Smile is an expression
It removes the tension.
Smile is the cheap thing
It relaxes a human being .
If we smile we look nice.
If we are sad we look very bad.
Smile, smile, smile but only on right time.
Krisha Dave / VIII / GH
SPORT 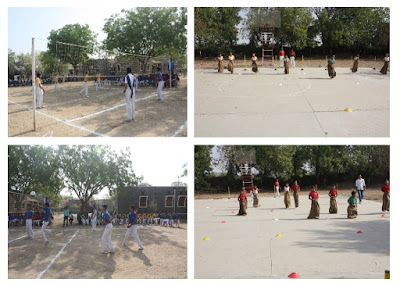 Thursday, 5th May: On the occasion of World Athletic Day Mr. Tarun Mishra/ PTI gave an Assembly Talk. He made the students aware of why the day is celebrated. He also organized a fun activity the mind game ‘Treasure Hunt’. Students had fun hunting for clues and the treasure. Muskan Rathod/ X/ TH found the first clue in a watch, Maharaj Singh/ XI/ RH found the second clue in the harmonium. The third clue was found by Hemlata Vaishnav/ IX /GH on a tree which led her to the treasure. Students are now desperately waiting to play such games more.
Saturday, 7th May: The first match of the term IH Volleyball Match was organized for students of Senior Section. Each house prepared their team for the match. First Match was played by Dhyanchand House and Teresa House, in which Dhyanchand House won. Second Match was played by Raman and Gandhi House, in which Raman House was the winner. Final Match was played by Raman House and Dhyanchand House in which Raman House was the winner. The winner of Hardline Match was Gandhi House.
Results:
I Raman House
II Dhyanchand House
III Gandhi House.
IH Sack Race was organized for the students of Class I – V. All students of each house participated in the race. Wearing the sacks and running with it was fun to watch Students of their respective houses cheered for the students.
Results:
Class I-II
I Priyanshu Aadha / TH
II Taruna Gehlot/ GH
III Bhupendra Singh / RH
Class III- V
I Tanish Choudhary / TH
II Lokendra Singh / RH
III Rajveer Singh / GH
STUDY

Friday, 6th May: Fruit Salad Activity was organized for students of Pre-Primary Section. Delicious, tasty fruit salad was made by the students with the help of their teachers. Instructions were written on the board to carry out the activity. Students had fun eating delicious, healthy tasty fruit Salad.
Mrs Komal Sood and Ms. Avani from Marksharks visited the School. They met the Science and Math Dept. Teachers who teach in Class VIII- IX. They told them about the added syllabus of Math and Science in Class VIII- IX. They also took pre and post feedback of the students, that how helpful it was for them to study with the help of tablets
STAFF NEWS
Mrs. Kavita Devda celebrated her wedding anniversary. We all wish her a very happy married life ahead! Our heartfelt condolences to Mr. Krishan Gopal / HOD Hindi who lost his aunt on 29th April. School prays for strength for the family and peace for the departed
CAMPUS NEWS
Good News! Our Solar Power Plant was inaugurated on 4th May. School will have 24X7 electricity. Congratulations to Yuvraj Ranawat / V who appeared for Navodhya Examination 2016 and topped Pali District.
Email ThisBlogThis!Share to TwitterShare to FacebookShare to Pinterest
Newer Post Older Post Home